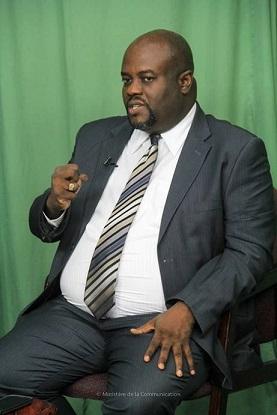 Last week, we saw how the U.S. Embassy hailed current Communications Minister Rudy Hériveaux's evolution from a Lavalas Family deputy from Trou du Nord to a leader of a breakaway "moderate faction" of the Lavalas Family in 2005 which sought to move away from the party's exiled leader Aristide and take part in U.S.-sponsored Haitian elections.

The first test of the "moderate Lavalas" politicians was the Feb. 7, 2006 election, the first polling after the Feb. 29, 2004 coup d'état against President Jean-Bertrand Aristide. Hériveaux ran for Senator in the West department against a crowded field of 54 candidates from 28 parties.

Despite running under the "Lavalas" banner, Hériveaux did very poorly in the first round, placing a dismal seventh place with only 68,781 votes. That was only 22% of the 310,188 votes tallied by first place winner, Jean Hector Anacacis of Préval's Lespwa platform, and 25% of the 269,562 votes won by second place Mirlande Manigat of the Assembly of Progressive National Democrats (RNDP). He even finished behind fellow Lavalas candidate Evelyne Cheron, former Duvalierist and Aristide minister Stanley Théard, Marie-Denise Claude of FUSION, and even Luckner Désir of the obscure Mobilization for Haitian Progress (MPH).

Luckily for Hériveaux, Manigat dropped out of the race in solidarity with her husband, RNDP's presidential candidate Leslie Manigat, who lost in the first round (under conditions that the Manigats protested) to Lespwa's René Préval. This allowed Hériveaux to advance to sixth place and therefore just squeak into the run-off.

Somehow, in the run-off on Apr. 21, 2006, Hériveaux managed to place second with 45.81% of the vote behind Anacasis's 75.13%. Fellow "Lavalas" candidate Cheron took third place with 41.28% of the vote. Hériveaux's four-year Senate seat made him the highest ranking "Lavalas" official in Parliament.

In a May 11, 2006 cable, U.S. Ambassador Janet Sanderson reported that Hériveaux, along with newly elected "Lavalas" deputies Jonas Coffy and Sorel François "complain that Préval has excluded Lavalas in his outreach to other political parties and the development of his 25-year plan" even while they "recognize the negative impact Aristide's return [from exile in South Africa] would have for the country."

"Hériveaux stated that Lavalas wanted to promote a democratic Haiti alongside Préval," Sanderson wrote, "but admitted that Préval has shown no sign that he is willing to work with Lavalas, despite the obvious Lavalas and L'Espwa [sic] connection. According to Hériveaux, Lavalas and L'Espwa are the same, characterizing L'Espwa as 'simply the branch of the Lavalas root.'"

In her comment to Washington, Sanderson commended Hériveaux and his confederates for showing "personal courage in breaking with militant Aristide supporters in committing to the electoral process" although she noted that "none of them were model democrats in the past." She also devined that "they surely assume that they are out of Aristide's favor and that their political futures depend on his absence."

Her guess was right, and on Jun. 2, 2006, "Hériveaux and the parliamentary group  within FL [Fanmi Lavalas] appear to have undertaken an ambitious political maneuver in attempting [to] reunify Lavalas and establish their leadership," Sanderson wrote in a Jun. 12, 2006 cable.

She explained to Washington that Hériveaux led "an opportunistic group looking to reconnect with the FL base" but was blocked by more radical currents championing struggle against the coup and for Aristide's return from exile.

But Hériveaux did his best to disguise his treachery. When popular organization leader René Civil, one of the radical current's leaders, was arrested on Aug. 25, 2006 and accused of carrying an unlicensed firearm, driving a stolen car, and "association with troublemakers," Hériveaux protested the arrest, "much to [the U.S. Embassy's] dismay," wrote Deputy Chief of Mission Thomas Tighe in an Aug. 29, 2006 dispatch.

"Hériveaux is a close embassy contact who has stressed in conversations with emboffs [embassy officials] that he and other FL moderates in parliament are opposed to Civil and the FL's militant faction," Tighe wrote, pledging to "raise Hériveaux's defense of Civil with him at the first opportunity."

Hériveaux never made much headway in his bid to take over the party, Sen. Simon Dieuseul Desras, currently the Senate's president, explained to the U.S. Embassy's political counselor in a Dec. 6, 2006 meeting. Desras told the embassy that there was a "leadership battle" taking place between Hériveaux and the FL's Executive Committee, which at that time was composed of singer/activist Annette Auguste (So An), former Aristide advisor Dr. Maryse Narcisse, former delegate Jacques Mathelier, former deputy Lionel Etienne, and Dr. Serge Louis.

Desras told the embassy that "the Executive Committee and a good majority of the party are miffed at Senator Hériveaux for his arbitrary claim to party leadership following Aristide's departure," according to Tighe's Dec. 20, 2007 cable to Washington.

Desras explained to the embassy that the Fanmi "Lavalas endorsed Senator Hériveaux after the Senator approached them in 2000 following his second-place finish in the first round" of elections for deputy, and "correctly believing Hériveaux's  chances were better than the Lavalas candidate, and also believing that Hériveaux would do Lavalas' bidding, Lavalas threw their support behind him and withdrew their own candidate. Hériveaux won the second round, and Lavalas subsequently endorsed him for President of the Chamber of Deputies," Tighe wrote.

This back story was what allowed Sen. Desras to tell the Embassy that "Senator Hériveaux's history shows he is not a true Lavalassian and has never been recognized as such."