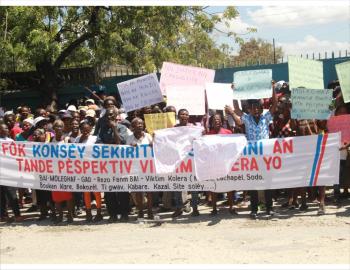 The United Nations enjoys broad immunity from suit, but has well-established legal obligations to compensate civilians harmed by its tortious conduct. Yet, it took years of advocacy – from the streets of Port-au-Prince to legal action in New York – to persuade the UN to redress harms it caused by recklessly introducing cholera to Haiti. Recently, the UN has recognised a moral, but not legal, duty to victims. This gap between the UN’s liability on paper and its practice violates victims’ right to a remedy, and undermines the UN’s own credibility in promoting the rule of law and human rights.

A number of widely publicised scandals have recently revealed failures by the UN to remedy civilians harmed by its peacekeeping operations. In particular, the UN’s response to its reckless introduction of a massive cholera outbreak in Haiti has exposed a stark divide between the scope of the organisation’s liability on paper and its compliance in practice. This accountability gap denies victims of UN harms the remedies they are entitled to under human rights law and the UN’s legal frameworks, and undermines the UN’s own moral standing as a promoter of rule of law. As the UN devises a new approach to cholera in Haiti, it still has an opportunity to rectify this – but doing so will require providing victims with justice, not charity.

The UN’s responsibility for cholera in Haiti

Cholera erupted in Haiti in October 2010 for the first time in Haiti’s history.1 The outbreak was quickly traced to a UN peacekeeping base, which had just received a new deployment of peacekeepers from Nepal. Following UN protocol, the peacekeepers were not screened for cholera prior to deployment, despite cholera being endemic in Nepal.2

A panel of experts appointed by the UN found that the UN base recklessly managed its waste, creating a high risk of environmental contamination.3 Broken pipes discharged wastewater from the base directly into a nearby tributary, and untreated human waste was dumped in uncovered pits that often overflowed into the adjacent waterway.4 Cholera-contaminated waste entered the tributary, which feeds into Haiti’s largest river that tens of thousands rely on for drinking, bathing and farming. From there, the disease spread like wildfire across the entire country.

Cholera is easily preventable with clean water and treatable through rehydration interventions. Yet, faced with severe underresourcing, the Haitian health system and humanitarian actors scrambled to respond. At the height of the epidemic, cholera was infecting one person every minute.5 Families watched their loved ones succumb to the disease and die within hours. Over the past seven years, at least 9,600 people have died and over 800,000 have been sickened.6 While the infection rate has dropped significantly in recent years, the epidemic continues to date.

The tortious conduct that resulted in the outbreak of cholera in Haiti squarely engages the UN’s liability to individuals. Under the Convention on Privileges and Immunities of the United Nations (CPIUN), the UN is obligated to ‘provide for appropriate modes of settlement’ of private law claims against it.7 Such claims are defined to include third-party claims for personal injury, illness or death attributable to peacekeeping operations.8