False information leads to false hope: Haitian disapora in the US and Canadian news 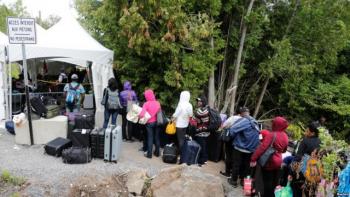 Over the past few weeks, thousands of Haitians have made their way to Canada from the United States, crossing at several border crossings, to ask for asylum. The reason appears to be the looming end -January 2018- of the Temporary Protected Status (TPS) program introduced by the United States in 2010. Another major factor seems to be the spreading of false information about Canada’s willingness to take Haitians in. For the past few weeks, the issue has been front and centre in several Haitian media outlets in Canada, the United States, and Haiti, but the first signs of the crisis go back several months.

The story is well known. As a result of the devastating earthquake of January 2010, then US President Barack Obama granted Temporary Protected Status to Haitians in the United States. Prime Minister Stephen Harper did the same in Canada. While the United States renewed the program, the Trudeau government terminated Canada’s TPS program last year. As Robert Lodimus bitterly wrote on Aug 19 in TouT Haïti, an online site dedicated to Haiti and its Diaspora, about 1,500-2,000 Haitians in Canada have received a formal expulsion notice. Now, as they prepare to leave, thousands of their compatriots are coming knocking on Canada’s door.

By and large, the bulk of the coverage in Haitian media hit a peak in August, along with the number of asylum seekers. However, some media outlets had already warned that something like it might happen following the election of Donald Trump as US president. They pointed out that his statements against immigration were creating widespread unease among Haitians -and others- in the United States.

For the most part, the reporting focused on facts and figures, the response of Canadian authorities, especially in Quebec, and the practicalities of coping with an unexpected number of people arriving at remote entry points along the border.

The consensus in the various media outlets is that the triggering factor in the rise in asylum seekers was the decision by the Trump administration to renew the TPS program for only six months, allowing beneficiaries to make the “necessary arrangements for their ultimate departure from the United States,” as Secretary of Homeland Security John F. Kelly put it in a statement on May 22. The existing program was set to expire on July 22, and the renewal extended it only to January 22, 2018. Previous renewals were always 18 months. This could affect almost 60,000 people, many of them children, some of them US-born. This could place Canadian authorities in the awkward situation of potentially expelling US citizens to Haiti, noted Haïti en Marche, a weekly newspaper published in Haiti, citing a Canadian immigration lawyer.

Before the official announcement several media had focused on attempts to get the program renewed. The Haitian Times, a New York-based newspaper, reported the launch of a petition in favour of TPS renewal in February. In May, the paper carried an OP-ED by New York Mayor Bill de Blasio in favour of its renewal. Haïti en Marche reported a conference in June on the TPS, where people from Haiti, Honduras, Nicaragua, and El Salvador hoped get the US to grant TPS beneficiaries permanent resident status. In April, Haiti Press Network, an online news agency, reported lobbying activity by Haitian groups in Miami in favour of TPS beneficiaries.

Almost as part of this pro-active campaign, Haïti en Marche also highlighted the contribution Haitian TPS beneficiaries make to the US economy as well as to Haiti itself via remittances, noting that the loss of latter would be a blow to the country’s already fragile economy. Contrary to claims by US officials like then Homeland Security Secretary John F. Kelly, Haïti Liberté, a Port-au-Prince newspaper, and Tout Haïti insisted that Haiti was neither safe nor capable of absorbing tens of thousands of people.

The Haitian Times, Haïti Liberté and TouT Haiti stressed that the country was still reeling, not only from the 2010 quake but also from the 2016 Hurricane Matthew, which wiped out almost a third of the country’s economy. Not to mention the outbreak of cholera reported by Haiti Press Network, widely believed to have been brought on by the UN peacekeeping force deployed in the wake of the 2010 disaster.

Going further, for Isabelle L. Papillon of Haïti Liberté, the six-month extension is just a way to prepare US and international public opinion for mass deportation. Citing Marleine Bastien, of Miami’s Haitian Women’s Center, Jean Numa Goudou in In-Texto, a Quebec-based monthly, suggests that the Trump administration deliberately created panic to push Haitians to “self-deport” themselves.

“The reality is that they have not received the right information”.
-New York City councillor, Mathieu Eugène, Haitian Times, August 22 2017

But none of this can be said to have come as a shock. François Jean-Denis, host of Tout savoir sur l’immigration (All you need to know about immigration) on CPAM 1410 radio, began warning in January of a rising number of asylum seekers, including Mexicans, Ghanaians, and Syrians crossing into Canada at remote border crossings in Quebec and Manitoba. In March, he reported that at the start of that month Canadian and US officials met to discuss the rising wave of asylum seekers reaching the border.

Again, the Haitian Times in August noted that Canadian authorities, including Immigration Minister Ahmed Hussen, were warned as early as March about the “‘urgent need’ to revisit policy” given the rising numbers of asylum seekers in January and the possibility that US President Donald Trump might scrap the TPS.

For Robert Lodimus of TouT Haïti, given intelligence cooperation between the US and Canada, the Canadian government must have known that if Washington ever cancelled the TPS, Canada would become a point of destination for many Haitian TPS beneficiaries. Since the termination of the TPS was set for January 2018, it was only natural that people would be heading north before the winter. In a similar vein, on August 30 Laurent Lafrance in Haïti liberté slammed Prime Minister Trudeau for his about-face over asylum seekers, blaming it on his desire to maintain close economic, military, and security cooperation with the United States.

With respect to who is coming, Haïti Liberté, In-texto, and Haiti’s main newspaper Le Nouvelliste reported that many of the arrivals were not necessarily beneficiaries of the US TPS program, but rather Haitians who had gone to Brazil in the wake of the 2010 quake, and found themselves forced to leave that country because of its economic woes. During his visit to Montreal in mid-August, Haitian Foreign Minister Antonio Rodrigue said the same.

Some of the stories of these transcontinental migrations are truly harrowing as entire families found themselves in the clutches of human traffickers trying to make their way across several national boundaries, usually overland, from Brazil through Peru, Ecuador, Colombia, Panama, Nicaragua, Guatemala, Mexico, and then the US.

Haïti Libre, an online paper, also reported that US Customs were telling their Canadian colleagues that some Haitians were coming to Canada from Haiti joining their US-based compatriots on the trek north. These Haitians were said to be flying from Port-au-Prince to Miami and then to Plattsburgh before taking a taxi to a border crossing point.

The other major factor that explains why so many Haitians have been trying to come to Canada is false information. On August 22, Haitian Times, noted Haitians were heading north “fueled by rumors Canada would be more sympathetic,” mostly because of misleading social media posts. Haitian-born New York City councillor, Mathieu Eugène, told the paper that “The reality is that they have not received the right information.”

But there is more. In June, radio host François Jean-Denis reported a scam apparently circulating in New York among Haitians that the Canadian government was actually encouraging Haitians to apply to come to Canada. In August, he went out of his way trying to dispel rumours about Canada’s policy towards Haitians, insisting that there was no open door, no automatic acceptance, no guarantee of Canadian citizenship.

To counter the disinformation, Haïti Libre reported attempts in Florida by local community leaders to warn their compatriots that crossing into Canada was not worth the risk of expulsion. Likewise, Canadian authorities dispatched Montreal area Haitian-Canadian MP Emmanuel Dubourg to dispel rumours about Canada’s openness (CPAM’s Reveil Matin, Haïti Libre, In-Texto), and launched an information campaign in Haitian creole to counter the widespread disinformation (In-Texto). However, for Laurent Lafrance, this response smacks of hypocrisy given Prime Minister Trudeau’s previous pro-refugees “propaganda.”

Last but not least, behind the headlines and the immediate concerns, some articles focused on factors within Haiti to explain the wave of asylum seekers. Moise Jean of Haiti Press Network, says Haiti is a failed state run by self-serving elites, backed by certain “benefactors.” Which is why so many want to leave.

In an opinion piece, Le Nouvelliste noted that the latest wave of migration is different from those of the past. Once Haitians left with the hope of returning home, now that hope is gone. People just want to leave, will do anything, go to any length, just to find a way to be somewhere else.

Writing on TouT Haïti, Pierre Clitandre noted last year that 30 years of democracy-building in Haiti have failed. Under the country’s old dictatorship, the rural poor were the bulk of those fleeing the country, usually by boats, as they still do; now they have been joined by the pauperized middle classes, who are using up what is left of their savings just to get a visa, just to get away.