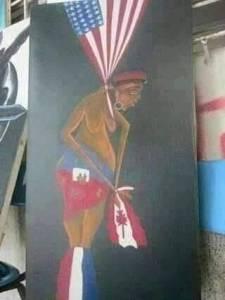 It is remarkable how easily the Canadian government gets away with blatant racism in its international affairs.

This country is part of a racist colonial alliance in Haiti yet few antiracist activists are even aware of the Core Group.

Last week prominent Haitian political commentator Madame Boukman Justice 4 Haiti tweeted: “The all-white Core Group of ambassadors (US, Canada, France, Brazil, Spain, Germany, EU, UN, OAS) in Haiti hold multiple meetings per month to discuss how to continuously tighten the stranglehold on 12 million Black Haitians.” In another statement, she posted a photo of alliance representatives under the message: “Meeting with the all-white CORE GROUP butchers in Haiti to ensure that the butchering of the blacks is going well.”

The Core Group has heavily shaped Haitian affairs since US, French and Canadian troops overthrew the country’s elected government in 2004 and instigated a UN occupation force. The Core Group has overseen the descent of Haitian political life as highlighted by last Saturday’s kidnapping of 16 US and one Canadian Christian missionaries. Five days earlier 100 Haitians were reportedly kidnapped in one morning in the Port au Prince neighborhood of Martissant and in July the de facto president was assassinated in his home with the involvement of members of his government.

In Reconstruir Haití: entre la esperanza y el tridente imperial (Rebuilding Haiti: Between Hope and the Imperial Trident) former Organization of American States (OAS) special representative to Haiti Ricardo Seitenfus details the Core Group’s role in an “electoral coup” that brought the ruling clique to power. Seitenfus suggested the Core Group “decided who the next president of Haiti would be before the elections even took place” in November 2010 and a subsequent runoff.

As part of foreign pressure, the Core Group discussed expelling sitting President René Prevál from the country days after the first round of elections, which the foreign powers pressed for despite the devastating January 2010 earthquake and terrible cholera outbreak. The head of the United Nations Stabilization Mission in Haiti (MINUSTAH) Edmond Mulet gave Préval 48 hours to leave the country, reports Seitenfus. “Prevál will have to leave the presidency and abandon Haiti” to which “Préval responded to Mulet by saying ‘he is not [twice ousted President Jean-Bertrand] Aristide, but that he is Salvador Allende’” who died in office facing a coup.

The pressure was part of the Core Group’s bid to make Michel Martelly president. A supporter of the 1991 and 2004 coups against elected president Jean-Bertrand Aristide, Martelly was a member of the Duvalier dictatorship’s dreaded Tonton Macoutes. As president, Martelly surrounded himself with former Duvalierists and death squad leaders who’d been arrested for rape, murder, kidnapping and drug trafficking.

The Core Group backed Martelly throughout his mandate even after he failed to hold elections. In response to the dissolution of parliament in January 2015, the Core Group expressed “trust that the Executive … will act with responsibility and restraint.” But Martelly ruled by decree for a year and his thugs violently disrupted the August 2015 legislative election.

Regardless, the Core Group helped Martelly impose Jovenel Moïse as his successor in elections that prompted rioting and a rerun. As mass protests erupted against Moise’s corruption and austerity in July 2018 the Core Group defended him. They blamed protesters for Canadian trained and financed police firing on them. They condemned protesters for “seeking to provoke the resignation of legitimate authorities.”

After president Moïse was killed in July the Core Group effectively determined the country’s replacement through a press release. When the US special representative to Haiti resigned in protest over Washington’s policy towards that country, Daniel Foote alluded to the Core Group’s anti-democratic intervention on behalf of Henry. His September 22 letter noted, “Last week, the U.S. and other embassies in Port-au-Prince issued another public statement of support for the unelected, de facto Prime Minister Dr. Ariel Henry as interim leader of Haiti, and have continued to tout his ‘political agreement’ over another broader, earlier accord shepherded by civil society.”

The Core Group formally came to life with a UN Security Council resolution 17 years ago. That resolution replaced the two-month-old US, France and Canada led Multinational Interim Force with MINUSTAH. Unofficially, the Core Group traces its roots to the 2003 “Ottawa Initiative on Haiti” meeting where US, French, OAS and Canadian officials discussed overthrowing Haiti’s elected government and putting the country under UN trusteeship. The Canadian minister who oversaw the meeting, Denis Paradis, justified intervening partly due to fear of (Black) population growth, labeling it “a time bomb which must be stopped immediately!” Another factor driving the “Ottawa Initiative on Haiti” was the 200-year anniversary of Haitian independence. The independence celebration heightened the racist contempt directed at Haiti since the country’s 1791-1804 revolution dealt a crushing blow to slavery, colonialism and white supremacy.

While Haiti was born in revolt against some of the most extreme racism ever known, the Core Group was formed in reaction to the impoverished Black majority of Haitians electing a social democratic government in 2000. The Core Group’s primary objective is to keep Haiti at the bottom of a highly unequal and racist global order. In economic terms, Haiti is an ultra-low wage sweatshop hub, which also serves as a sort of “reserve army of labour” for North American capitalists.

A few media outlets have reported recently on Solidarité Québec-Haiti and others calling for Canada to withdraw from the Core Group. But the demand has garnered little traction in official politics. During the recent federal election, the NDP explicitly endorsed Canadian participation in the Core Group while former Global Affairs diplomat, turned Green leader, Annamie Paul, ignored the subject.

On Monday, Madame Boukman tweeted, “Haiti will go wherever the CORE GROUP (US, Canada, France, Brazil, Spain, Germany, EU, UN & OAS) colonial bloc that orchestrated the 2004 coup and imposed itself as colonial ruler wants it to go, unless the masses rise up to restore national sovereignty and self-determination.”

The least Canadian antiracist activists should do is educate themselves about racism in foreign affairs. There is no justification for Canada participating in this nakedly imperialist alliance. All Canadians of conscience owe a debt of solidarity to the people of Haiti. We must demand Ottawa immediately withdraw from the racist Core Group.