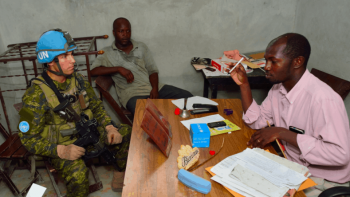 Canada played a key role in planning and building the rationale for the overthrow of Haiti’s government in 2004, leading to a decade and a half of violence and corruption that culminated in the assassination of president Jovenel Moïse last week.

Documents reviewed by The Breach contain new details about a secretive meeting hosted by the Canadian government in Ottawa and Meech Lake in 2003, which laid the groundwork for a military intervention a year later by U.S. and Canadian forces, and supported by France, against Haiti’s elected President Jean-Bertrand Aristide.

Aristide, a former priest who rose to leadership in Haiti’s first democratic elections after a line of U.S.-backed dictators, championed the country’s poor majority by doubling the minimum wage, disbanding the loathed military, and refusing to accept all of the U.S. and International Monetary Fund’s (IMF) demands to restructure Haiti’s economy.

At the 2003 meeting, Canada hosted officials from the French and U.S. governments and the OAS and EU to discuss the “Responsibility to Protect” doctrine, which critics have called a justification for military intervention by western states.

In the aftermath of the meeting, internal briefings reveal the Canadian government anxiously monitored reactions to an article published in the magazine l’Actualité, the only article in the Canadian media that reported discussions to “overthrow Aristide” and “put Haiti under UN trusteeship.”

The government came up with talking points to deny the claims. “There was never any question of putting Haiti under trusteeship or overthrowing President Aristide,” one reads.

Over the next year, the “Ottawa Initiative on Haiti” would involve other secretive meetings with the Bush administration’s State Department and meetings by several branches of the Canadian government where they discussed “worst case scenarios” with US and French representatives..

While the Canadian government insisted it was not considering military involvement, a memo summarizing discussions in February, 2004 explains that “speculation ranges from military intervention forces to small additions of civilians to monitor and observe.”

Weeks later, on February 29, 2004, Canadian special forces secured Haiti’s airport while Aristide was flown out of the country on a U.S. plane. Soon after, Canadian RCMP officers were training and vetting the newly reconstituted Haitian National Police.

The coup plunged Haiti into violence and chaos from which it has yet to recover.

According to an agenda overview, the 2003 Ottawa meeting was partly facilitated by a political consultant who would later serve as a “special advisor” to the post-coup Haitian regime’s Prime Minister.

The government documents were obtained through an Access-to-Information request by Green MP Paul Manly’s office and shared with The Breach.

Haitian-Canadian activist Jean Saint-Vil says that the documents are further confirmation Canadian government had a direct hand in Haiti’s misery.

“This legacy of destruction of the Haitian state and destabilization of Haitian society is not just something that happened,” he said. “It was something that was designed, planned and sustained by foreign occupation forces.”

In the wake of Moïse’s assassination, a new episode of U.S.-led military intervention in Haiti is a distinct possibility.

The killing of the U.S. backed President has prompted calls in the U.S. media for the deployment of an international military force to stabilize Haiti and prevent a humanitarian disaster.

If the Biden administration moves in that direction, Canada’s military forces may be called upon again to play a supporting role.

Testing the principle of sovereignty

In 2003, when Canada convened the meetings, Jean-Bertand Aristide had become a thorn in the side of western powers and the small economic elite within Haiti.

He had angered France by demanding reparations from the former slave-owning country, which had forced Haiti to pay billions to France after they liberated themselves from French bondage.

He was chafing under the conditions that the U.S. and IMF were trying to impose in exchange for loans, including public sector cuts and privatization.

His measures, popular in the poor neighbourhoods of the country, had provoked anger from Haiti’s elite, who have deep networks in France and Quebec.

In the midst of tensions between France and the U.S. over disagreements about the invasion of Iraq, Canada hosted top officials from those countries as well as organizations they dominate, the OAS, Francophonie and EU. No representatives from Haiti were invited.

According to the meeting agenda, the international invitees met for cocktails at Ottawa’s Chateau Laurier hotel, hosted by figures who remain in high level positions at Global Affairs Canada.

The meetings were presided over by Liberal Member of Parliament Denis Paradis, Canada’s then-Secretary of State for Latin America, Africa and the Francophonie.

Over the previous two years, Paradis, with the blessing of former Prime Minister Jean Chretien, had been criss-crossing the globe seeking to convince diplomats and heads of state that foreign intervention was needed in Haiti.

The Ottawa Initiative convened at a moment of diplomatic tension, just over a week after Chretien refused to participate in the US-led invasion of Iraq. .

Foreign Minister Bill Graham would later reflect on Canada’s participation in the Haiti operation. “There is a limit to how much we can constantly say no to the political masters in Washington,” Graham told an interviewer. “Eventually we came on side on Haiti, so we got another arrow in our quiver.”

A theme that loomed large over the meeting was the “responsibility to protect” (R2P) doctrine, which promotes the idea that military powers have a moral obligation to intervene in extreme cases of human rights violations.

The Canadian government had been centrally involved in developing and popularizing the concept, but was eventually stalled by scepticism among Global South countries at the UN in 2009, after widespread criticism that it served as a pretext for overriding national sovereignty and engaging in “humanitarian imperialism.”

After the meeting, an unknown attendee spoke to l’Actualité journalist Michel Vastel, who wrote an article with the headline “Haiti under UN trusteeship? Aristide must be overthrown – it’s not the Haitian opposition calling for this, but a coalition of countries gathered at the initiative of Canada!”

According to the documents, the Canadian government officials began damage control, protesting that the Haitian government had eventually been informed of the meetings.

In January 2020, Denis Paradis would underline the suspicions about Canadian intentions toward Haiti.

“It wasn’t a matter of putting Haiti under guardianship,” he told Radio-Canada in an interview about the Ottawa Initiative. “it was a question of ‘is the principle of sovereignty an immutable one?’”

Paradis did not respond to a request for comment by publication time.

Two current senior officials at Global Affairs Canada who were on the “reporting team” and hosted the Thursday drinks did not respond to questions about their role or the aftermath of Canada’s military intervention, but a Global Affairs spokesperson said in a written statement that the Ottawa Initiative was “intended as a forum to share ideas for helping to end the Haitian crisis,” adding  “Canada continues to encourage all stakeholders in Haiti to unite against violence.”

The tension between two key approaches was clear: Canada was “absolutely” not going to intervene militarily, documents show, but the possibility was left open if circumstances shifted.

An internal briefing reads: “absolutely clear that we are not considering using Canadian military forces at this time.”

But other passages hinted at intervention: “speculation ranges from military intervention forces to small additions of civilians to monitor and observe.”

Despite claiming they had no plans to intervene, one memo mentions that officials will also “discuss worst case scenarios with US and French.”

In a matter of days, the Canadian government would deploy special forces to secure the airport and send hundreds of soldiers to Haiti.

At their peak, Canadian forces in Haiti would number 500 troops (including an infantry company, a helicopter detachment and support personnel) and 100 police officers.

Some officers would remain with the UN mission after most troops left in August of 2004, and Canadian soldiers and RCMP officers continued to be present in Haiti until 2017.

The coup unleashed a campaign of terror against political movements in Haiti.

The RCMP provided training and vetting to the new Haitian National Police, which brought back many of the members of the feared national army that had been disbanded by Aristide.

Prisons were filled with dissidents, while the Canadian-appointed Deputy Justice Minister Philippe Vixamar commented “there are no political prisoners in Haiti.”

Lavalas, the most popular political party in the country, was repeatedly prevented from participating in elections.

“There are many hints that Canadians have received over the years that there is something terribly wrong happening in Haiti,” said Saint-Vil.

“Haiti is an international crime scene, and the criminals get away with it because their populations are not aware of how foreign policy of the U.S., France and Canada get implemented in places like Haiti.”

The assassination of Jovenel Moïse

Today, Haiti is in the throes of its most profound political crisis in decades.

With an extraordinarily low turnout in a contested decision marred by fraud, the election of Jovenel Moïse was a low point.

A Harvard University report released in April found that the Moïse administration was directly responsible for three massacres carried out in poor neighbourhoods against political opponents of the regime.

The report cites evidence that “the gang-led attacks were resourced and supported by state actors, ranging from high-ranking officials in the Moïse administration to the Haitian National Police.”

During this time, Moïse, like his predecessors, enjoyed Canada’s nearly unconditional backing.

Last week, Moïse was assassinated in his home.

As the possibility of another U.S.-led force looms, critics of Canada’s actions worry the story told about Haiti still has not changed.

“A journalist was asking me over and over again if there was some kind of nuance where we would be pro-intervention, and I just kept saying ‘no’,” Saint-Vil said.

“We even had a banner saying ‘Canada out of Haiti’, and the story about the demonstration had a big headline: ‘Haitians are asking for Canada to intervene’ – they already have their script.”