New report on housing in Haiti, authored by Mark Schuller 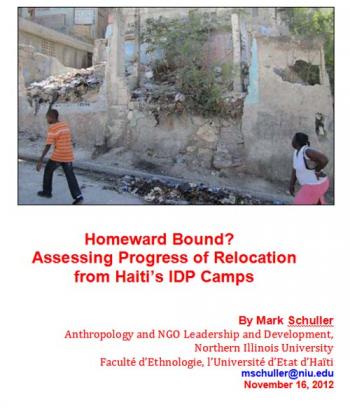 The first in a series of four reports on housing conditions and relocation was published today. Based on research conducted in July and August 2012 by Mark Schuller, with funding from the National Science Foundation, Homeward Bound? Assessing Progress of Relocation from Haiti’s IDP camps is available on the Institute for Justice and Democracy (IJDH) website at: http://ijdh.org/archives/29560.

Striking Haiti on its way to the United States’ eastern seaboard in late October, Hurricane Sandy exposed the precariousness of the estimated 370,000 people still living under tents almost three years after the devastating earthquake. The population of internally displaced persons (IDPs) peaked at 1.5 million in 2010. As a report from the US State Department pointed out, the current IDP population is estimated at 25% of this total. Much has been said about the efforts of the international community to rehouse this vulnerable population, particularly President Michel Martelly’s “16/6” program and the NGO programs that have followed.

With all the international aid going into Haiti, what are the results? How are Haitian people benefiting? What worked and what did not? Has relocation out of camps in Haiti been a success? Are people living better after leaving the camps? How do we know? There is little information publicly available to evaluate people’s current living situation after leaving the IDP camps. This report offers a snapshot, showing that the results differ across a range of several indicators.

Results indicate that where there have been significant public-private partnerships, such as the provision of water and sanitation services, people (all of whom by design are in permanent housing) report better living conditions now than where they were living before January 12, 2010. However other indicators such as economic prospects and security are worse, with some surprising results indicating that people lived better off within the camps than they do now. Families were also split up as a result of many factors including food aid and relocation assistance policies. Almost half of residents report that this may be a permanent change. Some notable findings of the research include:

Results show that more progress should be made in neighborhood revitalization. By themselves, rental assistance programs – in which subsidies will be ending beginning in a couple of months – do not address the underlying structural conditions that produced Haiti’s heightened vulnerability to natural events like the 2010 earthquake and the ever-increasing destructiveness of hurricanes, as Sandy dramatically shows.

Homeward Bound? Assessing Progress of Relocation from Haiti’s IDP camps (15 pages) is available on the Institute for Justice and Democracy (IJDH) website at: http://ijdh.org/archives/29560.