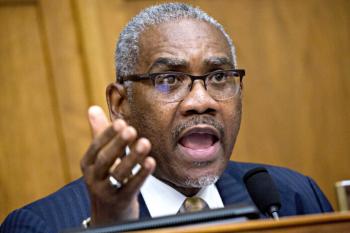 On Mon., Apr. 26, all the Democrats on the Western Hemisphere subcommittee of the U.S. House of Representatives Foreign Affairs Committee, including the committee’s chairman, Rep. Gregory W. Meeks (D-NY), sent a four-page letter to Secretary of State Antony Blinken, urging him to “make clear that the U.S. will not provide any support, financial or technical, to facilitate the proposed constitutional referendum, including through multilateral institutions.”

Currently, the referendum to overhaul the 1987 Haitian Constitution is scheduled for Jun. 27.

The letter further notes that “in briefings with [House] members, Department of State officials have said they do not think moving forward with the referendum is appropriate. However, both the Organization of American States (OAS) and the United Nations mission in Haiti (BINUH), have offered vocal support for the process.”

“At this stage, the process is not sufficiently inclusive, participatory, or transparent,” BINUH tweeted in French on Apr. 13. “National ownership of the draft constitution requires the engagement of a wider range of major political, societal, including women’s and religious groups across the country.”

Already the European Union and so-called “Core Group” (a gaggle of ambassadors which usually follow Washington’s lead in Haiti) have backed away from the June Constitutional referendum. Nonetheless, the U.S., EU, and Core Group until now all officially support the holding national elections – presidential, legislative, and local – in September and November under the Moïse administration.

Haiti’s highest courts, the bar association, and almost all constitutional scholars have ruled that Moïse should have stepped down on Feb. 7, 2021 under Article 134-2. The U.S. and its allies, nonetheless, have opined that they think his term ends on Feb. 7, 2022.

“Listen to the voices of Haitian civil society and grassroots organizations, who have been clear that no elections under the current administration in Haiti will be free, fair, and credible,” the House letter states. “The State Department should instead focus on the underlying democratic legitimacy issues identified by Haiti’s civil society and support a Haiti-led process for change. Elections held without meeting internationally accepted standards for participation and legitimacy will only further undermine faith in democratic governance, waste scarce resources, and perpetuate a cycle of political instability and violence.”

We write to express our serious and urgent concerns regarding the quickly deteriorating situation in Haiti. Although we appreciate your personal engagement with Haiti, and the State Department’s recent criticism of some of the unconstitutional actions by the administration of President Jovenel Moïse, we believe it is past time for a more significant review of U.S. policy in Haiti. We look forward to working with you to make this a reality.

We encourage you to support the sovereignty of the U.S.’s oldest neighbor in the hemisphere by reaffirming the U.S. commitment to the principles of democracy and rule of law.

The Biden Administration inherited a multifaceted crisis (constitutional, human rights, economic, social) that the actions of the previous administration exacerbated. However, we must also recognize that the crisis of today did not start yesterday. For decades, the international community has invested hundreds of millions of dollars to help Haiti achieve political stability and a representative democracy. In order to move forward more productively, we must acknowledge that these efforts have failed to achieve their desired results, and that continuing along the same path will only exacerbate the situation.

Nationwide unrest and political turmoil have increased significantly since 2018 and have brought about severe instability and political violence. In January 2020, the mandates of all but 10 members of the Haitian Parliament and all Haitian mayors were terminated due to delayed elections, leaving President Jovenel Moïse to run the country without any legislative oversight.

He has since abused his rule by decree powers in direct violation of the Haitian Constitution. As a result of the political instability, a crashing economy, lockdown from protests, and street gang violence, the Haitian federal government is failing to meet even the most basic needs of its citizens. The Moïse administration lacks the credibility and legitimacy to oversee a constitutional referendum scheduled for June 2021 or to administer elections that are free and fair. The proposed constitutional reform, which legal experts maintain is unconstitutional, would further concentrate executive power.

Parliamentary, local, and presidential elections set for Fall 2021 could increase the risk of violence throughout the country significantly. We are also concerned about inclusiveness of elections, lack of preparedness of electoral institutions to hold elections, as well as the unconstitutional composition of the provisional electoral council. Further, we are deeply concerned by the risk of gender-based violence against Haitian women and girls, as increased political violence and a weak legal system foster widespread impunity for heinous gender-based crimes.

Despite this alarming situation, the State Department has been insistent, both in public and in private briefings with members, that elections – now scheduled for later this year – are the only path forward. While elections will clearly be needed in the near future to restore democratic order, we remain deeply concerned that any electoral process held under the current administration will fail to be free, fair, or credible and that continued U.S. insistence on elections at all costs will only make this outcome more likely. President Barack Obama’s former Ambassador to Haiti, Pamela White, made clear during her testimony to the House Foreign Affairs Committee in March that legitimate elections are not possible in the current context.

Considering these factors, we urge the State Department to:

1) Make clear that the U.S. will not provide any support, financial or technical, to facilitate the proposed constitutional referendum, including through multilateral institutions. We take note that, in briefings with members, Department of State officials have said they do not think moving forward with the referendum is appropriate. However, both the Organization of American States (OAS) and the United Nations mission in Haiti (BINUH), have offered vocal support for the process. We urge the Department of State to use its voice and vote within these institutions to ensure U.S. taxpayer dollars are not spent in support of this referendum.

2) Listen to the voices of Haitian civil society and grassroots organizations, who have been clear that no elections under the current administration in Haiti will be free, fair, and credible. The State Department should instead focus on the underlying democratic legitimacy issues identified by Haiti’s civil society and support a Haiti-led process for change. Elections held without meeting internationally accepted standards for participation and legitimacy will only further undermine faith in democratic governance, waste scarce resources and perpetuate a cycle of political instability and violence.

3) Clearly identify and communicate to Congress what specific metrics you will use to evaluate whether Haiti’s elections will be free and fair, including a realistic timeline for achieving those necessary predicates.

4) Refrain from opining on constitutional interpretations in Haiti, specifically regarding the dispute over the mandate of Mr. Moïse. We note that myriad legal experts in Haiti, including the Federation of Haitian Bar Associations, and a broad cross-section of civil society have offered a different interpretation to that of the Department of State. Rather than taking sides in an internal political dispute, the U.S. must listen to and recognize all voices. It is the Haitian people who will determine the legitimacy of their leaders, and not any foreign government.

5) Promote the protection of human rights and the rule of law by enforcing Global Magnitsky Act sanctions on individuals credibly implicated in abuses. We take note of the U.S. Treasury Department’s sanctions on three individuals, including two former government officials, for their role in the La Saline massacre this past December. This positive development must be expanded upon further.

6) Combat corruption and impunity by tasking U.S. law enforcement agencies, including the Internal Revenue Service (IRS), to investigate compliance with U.S. tax laws on the part of Haitian politicians and private sector actors with interests in the U.S. Such an investigation should also look at the use of U.S. financial institutions in money laundering operations as well as the networks that traffic arms and drugs through Haiti.

7) Support the redesignation of Temporary Protected Status (TPS) for Haitian migrants living in the U.S. and put a temporary freeze on all Title 42 related expulsions to Haiti. We note that, amid the current political crisis, the Department of Homeland Security has expelled more than an estimated 1,500 individuals to Haiti just since early February, despite awareness that those returned to Haiti “may face harm.” It is vital that the U.S. comply with U.S. and international legal obligations and allow all migrants access to the asylum system.

8) Refocus and reform U.S. policy in Haiti through the appointment of a trusted and credible actor to serve as Special Representative for Haiti. Such a position could oversee a top-to-bottom review of U.S. foreign assistance, as well as work to bring disparate actors, both within Haiti but also within the international community, together with the view towards supporting a Haitian-led strategy of democratic development. A high-level appointment would not only open channels for communication within your Department but send a clear message about Haiti’s importance to you and to the rest of the Biden administration.

9) Hold high-level consultations with Haitian civil society and diaspora groups to hear their concerns and recommendations for a democratic path forward.

We thank you for your attention to this matter and look forward to your response.