Airline passenger arrested in Haiti after arriving from Miami with guns, ammunition 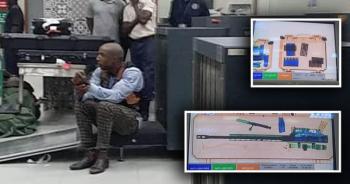 Haiti police said Tuesday that they have arrested a passenger who arrived in the country aboard an American Airlines flight with weapons.

“What is important is that he is under the control of the authorities,” said Haiti National Police spokesman Michel-Ange Louis-Jeune.

Louis-Jeune said he was still awaiting additional details about the passenger. Two other police sources in Haiti confirmed to the Miami Herald that the man in question is Jacques Yves Sebastien Duroseau, 33, a former U.S. Marine who boarded American Airlines Flight 949 from Miami International Airport into Port-au-Prince Tuesday.

American Airlines spokeswoman Martha Pantin said the airline is “reviewing to see whether the passenger declared the weapons.” She also said the guns were in a checked bag.

Pantin said Duroseau started his trip in New Bern, North Carolina. He then traveled to Charlotte and then Miami where he boarded a 10:34 a.m. American Airlines flight to Port-au-Prince Tuesday. A source said he had a total of six bags.

Police have not said what tipped them off to the man, whose brother was also arrested after he came to pick him up. But a Haitian customs agent told the Miami Herald that they became suspicious when they saw the three black cases, two of which were long. Most often the cases mean guns are inside.

Duroseau was immediately sent to a secondary check but then became agitated, forcing agents to secure all of the airport’s exits and send arriving passengers from a Delta Airlines flight out of another door.

“He didn’t want us to touch the boxes. He said his stuff will not go through a scanner,” said the agent who asked not to be identified because he didn’t have permission to speak to the the press.

The agent said one of the boxes held six guns, including two Uzis and a .45 caliber pistol. Agents from the U.S. Drug Enforcement Administration and officials from the U.S. Embassy were then called, as well as Haiti police and a justice of the peace. If the firearms were indeed Uzis, they would be fully automatic. Such weapons are almost always illegal to own in the United States.

Federal law allows passengers to travel with unloaded firearms as checked baggage as long as the weapons are in a locked, hard-sided container. They also must declare the weapons or ammunition to the airlines at check-in.

Haiti is under a U.S. arms embargo, making it difficult for guns to be imported into the country without authorization from the Haiti National Police. There are also restrictions on the types of firearms that are allowed.

The country, which is undergoing a deep political and economic crisis, is also awash in illegal arms. On Monday, a video showing gangs with assault weapons engaged in a shootout along the road leading to the airport was circulated on social media.