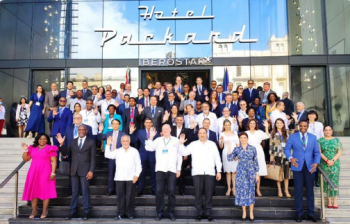 On Friday, November 11, the Bolivarian Alliance for the Peoples of Our America – People’s Trade Agreement (ALBA-TCP) evaluated the economic complementarity projects to strengthen the cooperation mechanisms of the regional organization.

The review was carried out as part of the 6th Conference on International Cooperation of the Association of Caribbean States (ACS), held in Havana, Cuba.

The executive secretary of ALBA-TCP, Sacha Llorenti, wrote on Twitter that he held a meeting with the minister of Foreign Trade and Foreign Investment of Cuba, Rodrigo Malmierca, and the president of the ALBA Bank, Raúl LiCausi.

“We reviewed projects on economic complementarity with the Minister of Foreign Trade and Foreign Investment of the Republic of Cuba, Rodrigo Malmierca, and the President of the ALBA Bank, Raúl LiCausi, at the International Cooperation Conference of the ACS-AE,” Llorenti posted on Twitter.

Exchange of perspectives
Llorenti held talks with authorities from different countries to share perspectives on integration and cooperation.

The ALBA-TCP executive secretary met with the minister of Foreign Affairs of Grenada, Joseph Andall, with whom he agreed on the mutual commitment to strengthen relations among the peoples of the region.

“We spoke with the Minister of Foreign Affairs of Grenada, Joseph Andall. We both agreed on the mutual commitment to strengthen relations and cooperation schemes between our peoples,” Llorenti wrote in a Twitter post.

Likewise, Llorenti spoke with the foreign affairs minister of St. Vincent and the Grenadines, Keisal Peters, with whom he talked about building bridges of brotherhood.

“We were with the Minister of Foreign Affairs of St. Vincent and the Grenadines, Keisal Peters, present at the 6th International Cooperation Conference of the ACS. The ALBA-TCP is building bridges of brotherhood and integration,” he said.

He also met with the Venezuelan Deputy Minister of Foreign Affairs for Latin America and the Caribbean, Rander Peña, and said that “the ALBA-TCP is strengthened in adversities.”

The 6th ACS Conference ended on Friday after reviewing issues such as regional development and the impact of climate change on the region.

“We are complementing the efforts of countries that, in some way, have issues in common such as natural disaster mitigation, sustainable tourism, facing the serious climate crisis, which the world is suffering in general,” said Llorenti.