Biden, Trudeau to Huddle on Haiti Mission US Is Reluctant to Lead 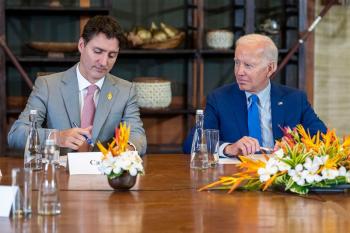 President Joe Biden will talk with Canadian Prime Minister Justin Trudeau about whether Canada or a third country is prepared to lead a mission to address the humanitarian and security crisis in Haiti.

The US is eager to organize an aid mission for the Caribbean nation, but is wary of putting its troops on the ground or leading to avoid evoking Washington’s interventionist past in the country.

Biden and Trudeau will hold a bilateral meeting Tuesday on the sidelines of the North American Leaders’ Summit in Mexico. They will “certainly” discuss Haiti, and what kind of multinational police force could help support the Haitian National Police, US National Security Advisor Jake Sullivan said.

“The United States believes that finding a country to help lead that effort is important. So I’ll leave it at that for now,” Sullivan told reporters Monday in Mexico City. Asked if Biden wants Canada to be that country, he demurred. “What I don’t want to do is jam anybody, so I want them to be able to have the conversation.”

The US and Canada have already sent security equipment in a bid to help Haiti’s police quell the violence that has destabilized their country after the assassination of President Jovenel Moise in 2021. The two countries, though, have failed to agree on which nation should take the lead on an aid mission or what such an operation would entail.

Canada sent its ambassador to the United Nations on a three-day tour of Haiti in December to assess the possibility of an international mission and the role Ottawa could play.

The US continues to downplay the likelihood of US troops being a part of any aid package, wary of repeating the experience of 1994’s US-led “Operation Uphold Democracy,” and a subsequent UN mission, neither of which succeeded in delivering long-term stability.

“The US has had multiple experiences with military operations in Haiti, and a solution that does not involve a major US military operation in Haiti is certainly the place that we are looking to try to produce an outcome,” Sullivan said.

Separately Monday, Canada shored up its military ties with the US by finalizing an agreement to purchase 88 F-35 fighter jets from Lockheed Martin Corp. in a C$19 billion ($14.2 billion) deal.