Canada & the Cold War against China 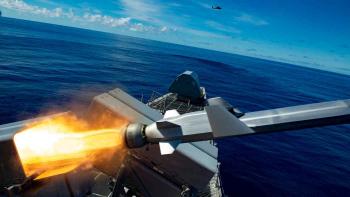 Independence-variant littoral combat ship USS Gabrielle Giffords launches a naval strike missile during exercise Pacific Griffin in the Philippine Sea. The NSM is a long-range, precision strike weapon that is designed to find and destroy enemy ships. (Photo courtesy of the U.S. Navy)

This post includes links to six articles and podcasts that focus on Canada's foreign policy towards China, the new Cold War, & the ongoing propaganda campaign in the west that alleges China is committing a genocide in Xinjiang province.

Phil interviews Ryerson University's Prof. Murtaza Haidar, who visited China in 2018, and who is skeptical of claims by the House of Commons of a 'genocide' in the Xinjiang Uyghur Autonomous region.

He urges Parliament and all Canadians to visit China and the Uyghur autonomous region and do some serious fact-finding before making dangerous and foolish accusations.

US to build anti-China missile network along first island chain

The U.S. will bolster its conventional deterrence against China, establishing a network of precision-strike missiles along the so-called first island chain as part of $27.4 billion in spending to be considered for the Indo-Pacific theater over the next six years, Nikkei has learned.

They form the core proposals of the Pacific Deterrence Initiative that the U.S. Indo-Pacific Command has submitted to Congress and Nikkei has reviewed.

"The greatest danger to the future of the United States continues to be an erosion of conventional deterrence," the document said. "Without a valid and convincing conventional deterrent, China is emboldened to take action in the region and globally to supplant U.S. interests. As the Indo-Pacific's military balance becomes more unfavorable, the U.S. accumulates additional risk that may embolden adversaries to unilaterally attempt to change the status quo."

The Canadian Parliament and the concept of "genocide"

Stephen Gowans discusses the problematic relationship of the Canadian Parliament to the concept of "genocide."

The best way for the left to address these issues is to turn our attention away from the theatre of Chinese millionaires’ extradition and instead dedicate our efforts to building internationalism from below. In Canada, as in all countries, to quote Karl Liebknecht, “the main enemy is at home.” We can refuse the Orientalism that enables anti-Chinese racism, oppose Canadian ruling-class moves against China that are motivated by U.S.-led inter-imperialist competition, and facilitate migrant relief efforts.

But most importantly, we can co-operate and build solidarity with Chinese workers, nascent labour movements in Hong Kong, and ethnic minorities resisting dispossession and cultural eradication, instead of siding with the state. Further, Canadian leftists’ positions need to be grounded within affected communities in China and their diasporas (with all of their complexities) so that there is a real stake in the outcome of leftist demands, and that those most directly affected are centred, listened to, and supported.

The webinar was moderated by Glenn Michalchuk, chair of Peace Alliance Winnipeg. Guests include: Radhika Desai, a Professor at the Department of Political Studies, and Director, Geopolitical Economy Research Group, University of Manitoba, Winnipeg, Canada. Yves Engler, a Montréal-based activist and author who has published 11 books on various aspects of Canadian foreign policy. Tamara Lorincz, a PhD candidate in Global Governance at the Balsillie School for International Affairs (Wilfrid Laurier University).

The New York Times published a factually challenged op-ed accusing China of committing “genocide” against its Uighur minority. The article sourced its spurious accusations to a right-wing operative who insists his research is part of a divine “mission” against Beijing that is “led by God.”

The author of the New York Times op-ed, Amelia Pang, happens to be a former employee of the Epoch Times, a far-right propaganda arm of a fanatical anti-China cult called Falun Gong. The extremist group preaches that race-mixing, homosexuality, feminism, and science are Satanic plots, and reveres Donald Trump as a God-like figure who was sent down from heaven to destroy the Communist Party of China.

In a statement to The Grayzone, Pang said, “The Epoch Times and the Falun Gong group do not represent my views in any way.”

However, a review of her five years of work at the Epoch Times shows Pang churned out hyperbolic anti-China reporting while publishing at least 17 articles promoting the Falun Gong cult or its cultural front group, Shen Yun.