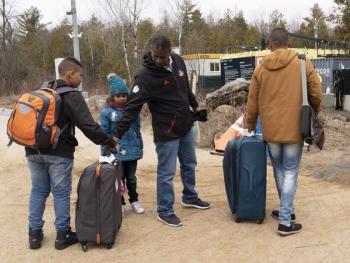 A family, claiming to be from Colombia, gets set to cross the border into Canada from the United States as asylum seekers on Wednesday, April 18, 2018 near Champlain, N.Y. PAUL CHIASSON / THE CANADIAN PRESS

In an interview with the Montreal Gazette Wednesday, Jean-Pierre Fortin said a spike in crossings that started Easter weekend has not abated, and for the past week about 200 asylum seekers per day have been turning up at that spot, arriving in buses or taxis from Plattsburgh. He said about 90 per cent of those crossing now are from Nigeria, or other African countries.

Fortin said border agents are already under too much pressure to process these migrants quickly, and with the weather set to warm up next week, numbers will only go up.

“All the indicators are very clear right now what will happen over the summer,” said Fortin, national president of the Customs and Immigration Union that represents 10,000 federal employees, including 8,500 uniformed border agents. “The (federal) government doesn’t seem to be acting to give us the number of resources necessary to do two things: ensure the safety of the country and maintain the integrity of the immigration system.”

Fortin said border agents require about 18 weeks of training, so even if the federal government hired additional agents now, they could not be in place before the end of the summer. For now, about 18 agents have been transferred to Quebec from other provinces to help deal with the influx, but Fortin said that leaves other border stations across the country understaffed.

Fortin said he is concerned the army will have to be called in again this summer to keep order at the border.

“We don’t have the resources to face this level of demand. We can’t just let people in to get lost in the wild. They have to be well documented, we have to be able to do our jobs properly to receive them.”

He noted that the Canada Border Services Agency has been understaffed since 2011 when the Conservative government cut 1,200 positions, and the Liberals have not heeded his repeated calls to restore those positions. The U.S. government’s decision to end temporary protected status for asylum seekers coming from disaster-stricken countries like Haiti has sent a surge of migrants to Canada.

“We are under more and more pressure to deal quickly with each of these asylum seekers. We have that pressure now, and it is early spring. Imagine what is going to happen in the middle of the summer when Americans are all on holidays and it’s the summer peak time for us. So we are extremely worried, and talks are already starting about mandatory overtime. And it’s only April.”

Fortin, said that after the crisis last summer that saw Montreal open its Olympic Stadium to shelter asylum seekers, numbers dwindled to about 60 people crossing per day at Roxham.

“Over the winter it was containable, but things started to fall apart over the Easter weekend, because then we started getting between 120 to 150 a day. Since the last week or two, we are getting at least 200 per day, and that’s with this weather, with ice storms and snow.”

There are a total of about 80 customs officers working at the official customs clearance centre at Lacolle, and about 18 of those have been assigned to deal with those crossing illegally at Roxham Rd.

Because of the numbers crossing there, the federal government has set up about a dozen trailers where asylum seekers can wait, sometimes overnight, while customs officers begin their files. Once they are processed, they are boarded on school buses and taken to one of four temporary shelters in Montreal.

Those four shelters can only accommodate 1,850 people total, and according to statistics released by the Quebec government, 1,188 asylum seekers were being temporarily housed in those shelters as of Tuesday.

Organizations that run those shelters have been tight-lipped about how they are handling the influx. Media inquiries were referred to the Regional Program for the Settlement and Integration of Asylum Seekers (PRAIDA), which is run by the Integrated Health and Social Services University Network for West-Central Montreal (CIUSSS West Central Montreal).

Emmanuelle Paciullo, a spokesperson for the CIUSSS West Central Montreal, said Quebec government officials had asked her not to comment on the situation Wednesday.

At the YMCA’s residence on Tupper St. in Westmount Tuesday evening, a young man from Eritrea said he had waited three days at the Roxham Rd. crossing for border agents to take his information.

“There were a lot of people,” said Gilay Tesfit, 29, speaking to a reporter outside the centre. “There was too much work for the officers.”

He said most of the other asylum seekers waiting with him were from Nigeria. He said his own journey from Eritrea had taken two and a half years. While he looked exhausted Wednesday evening, said he was happy to be in Canada.

The shelter was quite crowded, he said, but the people were being well-treated and the staff was working hard to accommodate them.