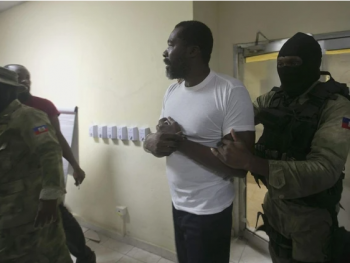 Former Haitian lawmaker Arnel Belizaire is escorted by national police to be presented to the press in Port-au-Prince, Dec. 4, 2019. PHOTO BY DIEU NALIO CHERY / FILES /THE ASSOCIATED PRESS

Facing sanction are former MP Arnel Belizaire and Charles Saint-Remy, a businessman associated with former president Michel Martelly, who is among the 13 others Canada has already sanctioned.

The two will be barred from entering or undertaking financial dealings in Canada.

Joly’s office says both have used their status “to protect and enable the illegal activities of armed criminal gangs, including through drug trafficking and other acts of corruption.”

Violent gangs have taken over the capital of Port-au-Prince, and Canada is seeking a consensus in Haiti on how it can help after the country’s unelected prime minister requested a military intervention.

Former Haitian prime minister Laurent Lamothe has gone to Federal Court to contest Ottawa’s decision to sanction him last November, and the government has not yet filed a response.