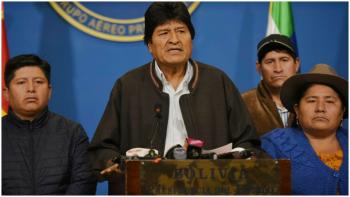 In yet another example of the Liberals saying one thing and doing another, Justin Trudeau’s government has supported the ouster of Evo Morales. The Liberals’ position on the violent ouster of Bolivia’s first ever Indigenous president stands in stark contrast with their backing of embattled pro-corporate leaders in the region.

Hours after the military command forced Morales to resign as president of the country with the largest proportion of Indigenous people in the Americas, Chrystia Freeland endorsed the coup. Canada’s Minister of Foreign Affairs released a statement noting “Canada stands with Bolivia and the democratic will of its people. We note the resignation of President Morales and will continue to support Bolivia during this transition and the new elections.”

“This Is a Military Coup”: Bolivian President Evo Morales Resigns After Army Calls for His Ouster

Bolivia is in a state of political crisis after longtime President Evo Morales resigned Sunday following what he described as a military coup. Weeks of protests have taken place since a disputed election last month. Morales announced his resignation in a televised address Sunday, shortly after the Bolivian military took to the airwaves to call for his resignation. Bolivia’s vice president also resigned Sunday, as did the head of the Bolivian Senate and the lower house. Opposition leader Jeanine Áñez, who is the second vice president of the Bolivian Senate, is claiming she will assume the presidency today.

Evo Morales was the longest-serving president in Latin America, as well as Bolivia’s first indigenous leader. He was credited with lifting nearly a fifth of Bolivia’s population out of poverty since he took office in 2006, but he faced mounting criticism from some of his former supporters for running for a third and then a fourth term. For more on the unfolding crisis in Bolivia, we speak with Mark Weisbrot, co-director of the Center for Economic and Policy Research. His latest piece for The Nation is headlined “The Trump Administration Is Undercutting Democracy in Bolivia.” “This is a military coup — there’s no doubt about it now,” Weisbrot says.

Evo Morales is more than Bolivia’s first indigenous president — he is our president, too. The rise of a humble Aymara coca farmer to the nation’s highest office in 2006 marked the arrival of indigenous people as vanguards of history. Within the social movements that brought him to power emerged indigenous visions of socialism and the values of Pachamama (the Andean Earth Mother). Evo represents five centuries of indigenous deprivation and struggle in the hemisphere.

Evo’s critics, from the anti-state left and right, are quick to point out his failures. But it was his victories that fomented this most recent violent backlash.

When Luis Fernando Camacho stormed into Bolivia’s abandoned presidential palace in the hours after President Evo Morales’s sudden November 10 resignation, he revealed to the world a side of the country that stood at stark odds with the plurinational spirit its deposed socialist and Indigenous leader had put forward.

With a Bible in one hand and a national flag in the other, Camacho bowed his head in prayer above the presidential seal, fulfilling his vow to purge his country’s Native heritage from government and “return God to the burned palace.”

“Pachamama will never return to the palace,” declared the pastor to his side, referring to the Andean Mother Earth spirit. “Bolivia belongs to Christ.”

The Sunday military coup in Bolivia has put in place a government which appears likely to reverse a decision by just-resigned President Evo Morales to cancel an agreement with a German company for developing lithium deposits in the Latin American country for batteries like those in electric cars.

The coup, which on Sunday resulted in Morales resigning and going into hiding, was the result of days of protests from right-wing elements angry at the leftist Morales government. Sen. Jeanine Añez, of the center-right party Democratic Unity, is currently the interim president in the unstable post-coup government in advance of elections.

Moscow recognises former Second Vice President of the Bolivian Senate Jeanine Anez as interim president of the Latin American country, Russian Deputy Foreign Minister Sergei Ryabkov stated on Thursday. He noted, however, that Russia is still concerned by the political crisis in Bolivia, stressing that Moscow is worried about the absence of a parliamentary quorum.

Ryabkov said that the events recall certain groups that use illegal methods to reach their political goals. He also noted that Moscow still sees all events prior to Morales' resignation as coup d'etat. Several countries, including Venezuela, Cuba and Mexico, have already described the events in Bolivia as a coup.

Lithium is the key ingredient for the batteries fueling the world’s electric car and smartphone revolution. Market analysts speculate that by the mid-2020s, lithium supply will be straining to keep up with demand from auto and mobile device manufacturers. It’s being called the “gold of the 21st century.” Bolivia’s largely untapped Salar de Uyuni salt flats, located high in the Andes, are estimated to contain between 25 and 45% of the planet’s known reserves. The government of Evo Morales has been working to create a publicly-owned lithium industry to help diversify his country’s economy and raise more of its people out of poverty.

Efforts to get at the metal by multinational mining companies from the U.S., Canada, South Korea, and others have so far largely faltered. A joint venture with a German company was canceled by the Bolivian government last week over concerns that not enough benefit would go to the indigenous people who live near Uyuni. Chinese and Russian firms have been among the few that have inked deals.

Given the fate of too many progressive governments in this part of the world over the last century, the next part of the story was unfortunately totally predictable. This weekend, the government of Bolivian President Evo Morales was overthrown in a military coup.

Top Bolivian coup plotters trained by US military’s School of the Americas, served as attachés in FBI police programs

The United States played a key role in the military coup in Bolivia, and in a direct way that has scarcely been acknowledged in accounts of the events that forced the country’s elected president, Evo Morales, to resign on November 10.

Just prior to Morales’ resignation, the commander of Bolivia’s armed forces Williams Kaliman “suggested” that the president step down. A day earlier, sectors of the country’s police force had rebelled.

Though Kaliman appears to have feigned loyalty to Morales over the years, his true colors showed as soon as the moment of opportunity arrived. He was not only an actor in the coup, he had his own history in Washington, where he had briefly served as the military attaché of Bolivia’s embassy in the US capital.

Bolivia: the politics of the coup attempt against Evo Morales

The ongoing coup attempt by the United States-backed opposition in Bolivia has reached boiling point. Sections of the police have declared mutiny and far-right protesters attacked and shut down the government’s media outlets, assaulting its journalists. Now new elections have been called by the Bolivian government in an attempt to defuse the situation.

Beyond the fast paced developments, it’s necessary to understand the politics and background to this coup attempt, which has now undertaken a dramatic shift to the right as fascist elements within Bolivia’s right wing opposition come to the fore.

Bolivian President Evo Morales was forced to resign Sunday after senior army and police chiefs called on him to do so following weeks of right-wing unrest and violence against his Oct. 20 elections victory, in what his government has called a coup by opposition forces in the country.

“I decided to resign from my position so that Carlos Mesa and Luis Camacho stop abusing and harming thousands of brothers ... I have the obligation to seek peace and it hurts a lot that we face Bolivians, for this reason, so I will send my letter of resignation to the Plurinational Assembly of Bolivia,” the former president of Bolivia said in a press release.

Bolivian Vice President Alvaro Garcia Linera also said that he was resigning from his position. The two leaders said that they would be handing their resignation letters to the country's National Assembly.