Canada's role in the disaster in Afghanistan - a Compilation 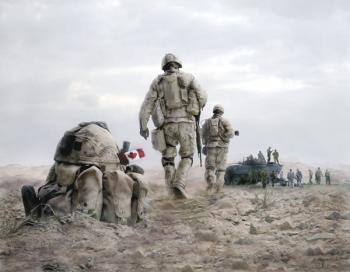 Canada hasn’t reckoned with its bloody legacy in Afghanistan

The war lasted from 2001 to 2014, making it Canada’s longest foreign war. Canadian casualties were relatively few: 159 soldiers were killed and around 2000 injured. By contrast, over 100,000 Afghans were killed as a direct result of the conflict, a substantial portion of them civilians. If one considers the consequences of the war—destruction of crops and infrastructure, disruptions to hospitals and health care, poverty and malnutrition—that number could be as high as 500,000.

A decade into the war, 70 percent of Afghans were living in extreme poverty. Violence and instability were far worse than they had been before the invasion. The Canadian media regularly reassured Canadians that they were in Afghanistan to promote peace, to stabilize a “failed” state and to promote human rights, especially for women. That Afghan women’s associations rejected this rationale was an uncomfortable disruption to the story. They were typically ignored.

In Canada, any meaningful dialogue about whether the war itself was good or bad was postponed indefinitely; Canadians’ job was to simply line up behind the men and women who were putting themselves in harm’s way on behalf of the rest of us. But what if the war in Afghanistan was never about protecting Canadians at all? The most important question about the war was precisely the one Canadians were being told to ignore.

Blood in the Sand

Even a cursory look at America’s spending in Afghanistan reveals the stupidity of its policy there. According to a recent report by the Special Inspector General for Afghanistan Reconstruction, the US invested roughly $946 billion between 2001 and 2021. Yet almost $1 trillion in outlays won the US few hearts and minds.

Here’s why. Of that $946 billion, fully $816 billion, or 86%, went to military outlays for US troops. And the Afghan people saw little of the remaining $130 billion, with $83 billion going to the Afghan Security Forces. Another $10 billion or so was spent on drug interdiction operations, while $15 billion was for US agencies operating in Afghanistan. That left a meager $21 billion in “economic support” funding. Yet even much of this spending left little if any development on the ground, because the programs actually “support counterterrorism; bolster national economies; and assist in the development of effective, accessible, and independent legal systems.”

Lessons from Afghanistan: War is only good for those who profit from it

Canada's biggest military deployment since World War II, more than 40,000 Canadian troops fought in Afghanistan between 2001 and 2014. Canada spent $20 billion on the military operations and related aid mission in Afghanistan. While the stated rationale of the war was to neutralize al-Qaeda members and topple the Taliban regime, the Taliban has now regained control of the country and Jihadist groups' influence has increased.

Portrayed as a battle against the misogynist Taliban, the foreign intervention benefited an equally unsavoury assortment of warlords who previously imposed the veil and banned education for women, as well as destroyed schools, museums and cinema halls. Individuals responsible for massive human rights violations during Afghanistan's mid-1990s civil war were appointed to prominent government positions.

The US Endgame in Afghanistan Was Mineral Extraction, Not Democracy

As a gentle history lesson, the U.S. military invasion of Afghanistan was based on a series of lies perpetuated by President George W. Bush, Defense Secretary Donald Rumsfeld, and their numerous neocon chums. The U.S. was not in Afghanistan to establish democracy and respect for the rule of law and human rights. It was there to weed out the terrorists it had created decades earlier to fight the Soviet Union; the U.S. wanted to clear the field in order to secure one trillion dollars of mineral concessions for iron, copper, gold and lithium for which China and India had obtained the rights for during the U.S. occupation. In short, a decade ago, Afghanistan invited foreign investment and public bids from China, India and other countries, purposely excluding U.S. companies.

A minimal level of intellectual honesty about the historical facts and transnational business interests would help matters.

The U.S. military and its contractors served as security presence to protect assets and mineral rights already claimed to other foreign countries. In the past decade, American military forces were little more than security guards for foreign mining companies, including the Metallurgical Corporation of China, Jiangxi Copper Corporation, and the China National Petroleum Corporation.