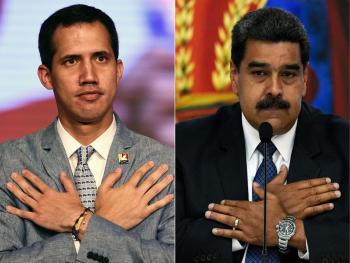 This combination of pictures created on Tueseday shows the president of Venezuela's National Assembly and self-proclaimed acting president Juan Guaido (L) gesturing during a meeting with students at the Central Universidy of Venezuela (UCV) in Caracas last week and Venezuelan President Nicolas Maduro (R) gesturing during a meeting with international observers at the Miraflores presidential palace in Caracas in May.  (FEDERICO PARRA / AFP/GETTY IMAGES)

Canada against Venezuela from the start (Interview with Yves Engler)

Yves Engler discusses Canada's role in the attempted coup in Venezuela - it goes way back. The recent coup was planned a few years ago, but Canada has plotted against Venezuela since 2002.

Canadian resource giants in the oil and mining sectors have all taken exception to Venezuela's use of its resources for its own purposes. Our politicians act on this sentiment, and are boastful of Canada's role in subversion and threats of force. Even "humanitarian aid" is used as a weapon to create divisions within Venezuela.

The OAS should never have let Canada in, which is sabotaging it from inside. There's hardly a social-democratic government in the hemisphere that Canada won't try to overthrow. Meanwhile, Chrystia Freeland's Venezuela press conference excluded TELESUR and RT, but not our compliant monopoly media (who didn't complain).

The one word that's missing from all this is "opposition." The NDP is wrestling with itself over whether it should oppose Canada's illegal interference against a social-democratic government.

The Trudeau government, assuming a leadership role as host of the “Lima Group,” explained that Maduro is not legitimate because the national elections he won were flawed, allowing the presidency to fall to Guaido, the head of the national assembly.

(Similarly, once it has been established that the 2016 U.S. elections were flawed by Russian meddling, we can expect the Trudeau government to recognize Nancy Pelosi as the legitimate president of the United States.)

The turmoil in Venezuela has faded from the news somewhat this week, but the real action is just beginning. U.S. President Donald Trump has assembled a team of hatchetmen, including war-hawks John Bolton and Elliott Abrams, to work on regime change in Venezuela.

It was this team that set things in motion late last month with a phone call from Vice President Mike Pence to Guaido, pledging U.S. support “if he seized the reins of government,” according to the Wall Street Journal.

Canada has called for a peaceful transition. But if the U.S. invades Venezuela to formally install Guaido, Canada will have played its part in teeing things up.

David Smolansky is a founding member of the Venezuelan Voluntad Popular political party. Joe Emersberger is a writer and political analyst. Fernando Cutz is the former director for South America, at the White House National Security Council. Lucas Koerner is a political analyst and editor for Venezuelanalysis.com.

There’s a nation that saw violent unrest, looting and anti-government protests over the past days, but don’t think of Venezuela. This is Haiti, a country that received no mention from the US except for a vague travel warning.

Thousands of people demonstrated in the Haitian capital, demanding that President Jovenel Moise step down. Protesters, who engaged in bloody skirmishes with police in which at least four people were killed, also vented their anger at economic hardships, embezzlement and widespread corruption.

With the NDP, Conservatives, CIC, CCA, most media, etc. supporting regime change in Venezuela, there is little downside for the Liberals to push an issue they believe boosts their international brand. To get a sense of their brashness, the day of the “Lima Group” meeting the iconic CN Tower in Toronto was lit up with the colours of the Venezuelan flag. A tweet from Global Affairs Canada explained, “As the sun sets on today’s historic Lima Group meeting, Venezuela’s colours shine bright on Canada’s CN Tower to show our support for the people of Venezuela and their fight for democracy.”

Venezuela defines the future of the region

Guaidó’s self-proclamation as Venezuelan president is the most ridiculous and dangerous coup attempt in recent years. With the shameless backing of Washington, the Venezuelan rightwing intends to place a complete stranger at the helm of the state.

This time around, the starting signal was neither a terrorist attack nor an assassination attempt directed against Maduro. Trump has chosen a group of conspiracy experts (Abrams, Pence, Bolton, Rubio) to pursue escalation and has opted to seize the Venezuelan oil enterprise operating in the United States (CITGO). He has brushed aside all principles of legal guarantee in his quest to appropriate the world’s largest concentration of crude oil reserves.

South America’s rightwing governments have their own motives for supporting the coup. Colombia’s Duque wants to do away with the Peace Accords signed with the guerillas, after having dismantled UNASUR. A contingent of the US Marines already stationed in Colombia is prepared for any sort of provocation.

It’s convenient but incorrect to simply blame the USA for Ottawa’s nefarious role in the slow motion attempted coup currently underway in Venezuela.

Critics of the Liberal government’s push for regime change in Venezuela generally focus on their deference to Washington. But, Ottawa’s hostility to Caracas is also motivated by important segments of corporate Canada, which have long been at odds with its Bolivarian government

In a bid for a greater share of oil revenue, Venezuela forced private oil companies to become minority partners with the state oil company in 2007. This prompted Calgary-based PetroCanada to sell its portion of an oil project and for Canadian officials to privately complain about feeling “burned” by the Venezuelan government.

Venezuela has the largest recognized oil reserves in the world. The country also has enormous gold deposits.

A number of Canadian companies clashed with Hugo Chavez’ government over its bid to gain greater control over gold extraction. Crystallex, Vanessa Ventures, Gold Reserve Inc. and Rusoro Mining all had prolonged legal battles with the Venezuelan government. In 2016 Rusoro Mining won a $1 billion claim under the Canada-Venezuela investment treaty. That same year Crystallex was awarded $1.2 billion under the Canada-Venezuela investment treaty. Both companies continue to pursue payments and have pursued the money from Citgo, the Venezuelan government owned gasoline retailer in the US.

International observers to Venezuela’s election pen letter to the EU

I was a member of a roughly hundred-strong core of observers of the May 20 Venezuelan election. We met senior representatives of all the candidates, and questioned them closely. We met with the president and two vice-presidents of the Supreme Judicial Tribunal. We examined the electoral system in detail and, on election day, observed voting procedures across the country.

We noted, in particular, not only the sophistication of the voting system which, in our collective view, is fraud-proof, but also that every stage, from the vote itself to the collation of returns, their verification and electronic submission, was conducted in the presence of representatives of the contending parties. As for “reporting irregularities”, we would be interested to hear of examples, since the reporting system is exceptionally rigorous and tamper-free. We doubt you have any evidence to back up the EU’s claim of “numerous reporting irregularities”.

We were unanimous in concluding that the elections were conducted fairly, that the election conditions were not biased, that genuine irregularities were exceptionally few and of a very minor nature. There was no vote buying because there is no way that a vote CAN be bought. The procedure itself precludes any possibility of anyone knowing how a voter cast her or his vote; and it is impossible – as we verified – for an individual to vote more than once or for anyone to vote on behalf of someone else.