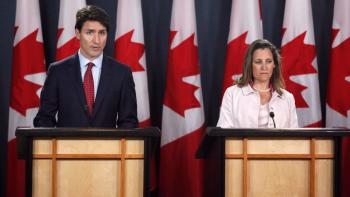 According to the official story that the Liberal government and most of the mainstream media have been trying to sell, Ottawa recently recognized the leader of Venezuela’s National Assembly as that country’s president because Nicolas Maduro suspended the constitution 18 months ago and thus lost legitimacy. Thus, Ottawa intervened aggressively to re-establish democratic order there. But this narrative of Canada’s involvement omits its long-standing hostility to the Venezuelan government.

In recent days Canada’s former ambassador to Venezuela, Ben Rowswell, has repeatedly claimed that Canada’s effort to overthrow Venezuela’s government began with Maduro’s call for a Constituent Assembly in July 2017, which Rowswell considers illegitimate. Canada’s “approach to democracy promotion … can be traced to the summer of 2017, when Nicolas Maduro suspended the constitutional order,” he wrote in a Globe and Mail op-ed.

But Rowswell knows this is not true. In fact, when he departed as ambassador in July 2017, he sang a different tune, boasting that “we established quite a significant internet presence inside Venezuela, so that we could then engage tens of thousands of Venezuelan citizens in a conversation on human rights. We became one of the most vocal embassies in speaking out on human rights issues and encouraging Venezuelans to speak out.”

VOW Letter – opposition to Canada’s stance and sanctions against Venezuela

We, the Canadian Voice of Women for Peace (VOW), are writing to you about Canada’s position on the current crisis in Venezuela.

VOW strongly opposes the Government of Canada’s recognition of Juan Guaido, leader of the National Assembly, as the self-declared interim president of Venezuela and Canada’s participation in the Lima Group. Canada’s misplaced support of Mr. Guaido is contributing to the political crisis and a potential coup in the country. Canada should not join the Trump and Bolsonaro administrations in calling for “regime-change” or back any foreign interference or military intervention in Venezuela.

THE WHITE HOUSE is openly plotting to bring down the government of Nicolas Maduro in Caracas. It is being openly promoted as a campaign to steal Venezuelan oil for the benefit of U.S. corporations, and some powerful Democrats are cheering Trump on and joining the conspiracy. Elliott Abrams, one of the premiere butchers of the U.S. dirty wars in Central America in the 1980s, has been named the point man in the effort to bring regime change to Venezuela.

This week on Intercepted: Investigative journalist Allan Nairn talks about the history of U.S. crimes in Central America, the time he told Abrams, on national television, he should stand trial for war crimes, and the threat of U.S. military action in Venezuela. Corporate media coverage of Venezuela has been atrocious and largely uniform with the role of successive U.S. administrations in destabilizing the country almost never highlighted. Former Hugo Chávez adviser Eva Golinger and journalist and educator Roberto Lovato discuss how Venezuela was thrust into economic crisis, who is responsible, and what Washington really wants.

Moderate Rebels episode 35: Max Blumenthal and Ben Norton speak with Aline Piva, who lives and teaches in Caracas, Venezuela and explains what's really going on in the country, with a US-led coup attempt to install the right-wing opposition. We discuss the economic warfare and US sanctions on Venezuela, the daily life and problems, coup leader Juan Guaidó and the opposition's neoliberal politics, and the geopolitics of regime change against Nicolás Maduro

Canada will host a meeting of Western Hemisphere countries next Monday to address the political and economic crisis in Venezuela.

The Lima Group, a coalition of more than a dozen countries in the Americas, minus the United States, was formed in August 2017 to address Venezuela's growing backslide into authoritarianism. Foreign Affairs Minister Chrystia Freeland confirmed its next session will be in Ottawa.

Canada needs to play a leading role in the Lima Group because the crisis in Venezuela is unfolding in Canada's global backyard, she said.

It is the people who will save the Bolivarian revolution

On January 23, yet another coup attempt was launched in Venezuela at the behest of the United States.

The US has a long history of supporting dictators and oligarchs in the region, and in Venezuela, especially of the most brutal kind. But even by those standards, the attempt by the largely unknown Juan Guaidó to claim the presidency that by right belongs to Nicolás Maduro was especially cynical. Maduro, after all, had not only won the election in May last year but had continuously extended the offer of dialogue to an opposition which had relentlessly subverted his rule. The election process in Venezuela has been certified as scrupulous and fair by a variety of international authorities. And Venezuela has moved beyond many other democracies by seeking to institutionalize and deepen collective decision making in matters as basic as the distribution of food and other resources.

The making of Juan Guaidó: How the US regime change laboratory created Venezuela’s coup leader

While Guaidó is today sold as the face of democratic restoration, he spent his career in the most violent faction of Venezuela’s most radical opposition party, positioning himself at the forefront of one destabilization campaign after another. His party has been widely discredited inside Venezuela, and is held partly responsible for fragmenting a badly weakened opposition.

“‘These radical leaders have no more than 20 percent in opinion polls,” wrote Luis Vicente León, Venezuela’s leading pollster. According to León, Guaidó’s party remains isolated because the majority of the population “does not want war. ‘What they want is a solution.’”

But this is precisely why Guaidó was selected by Washington: He is not expected to lead Venezuela toward democracy, but to collapse a country that for the past two decades has been a bulwark of resistance to US hegemony. His unlikely rise signals the culmination of a two decades-long project to destroy a robust socialist experiment.

Venezuela: No to intervention, no to Maduro

Thousands of people, mostly women, protested the food shortages in their country by banging on pots and pans as they marched in the streets. They loudly opposed the socialist policies of the government. The police eventually dispersed the protestors, but pressures on the government were mounting. In response, the government complained loudly about a U.S.-led policy of economic strangulation and isolation. At the United Nations, the president of the country worried that the United States would support a military coup to oust him.

This was Chile in 1971. And the president of the country, Salvador Allende, was right to worry aboutU.S. intervention: he would be overthrown and killed in a coup in 1973.

But this is also Venezuela in 2019. Anti-government protesters face even worse food shortages that have brought thousands onto the streets to bang on pots and pans. This is no manufactured crisis. In 2017, according to Reuters, Venezuelans lost an average of 24 pounds, and nearly 90 percent now live in poverty. The Venezuelan government has responded to the protests not only by dispersing them but, after the most recent demonstrations, killing 40 people and detaining 850. This is on top of the government killing dozens of people as a result of protests in 2017 and throwing hundreds of political opponents in jail.

The most unforgivable Western lie about Venezuela: that it has a ‘caged’ media

The idea that Venezuela has a “caged” media has to be one of the most unforgivable pieces of Western propaganda about the country. And a simple analysis shows just how ignorant that allegation is.

Indeed, just a few days ago, one of Venezuela’s most widely read newspapers, El Universal, published an op-ed enthusiastically applauding the efforts of the US-backed opposition to bring about President Nicolás Maduro’s ouster by recognizing opposition leader Juan Guaidó as the country’s new president. The op-ed said Guaidó was managing his US-backed strategy “perfectly”. And it joyously stated that the US and its allies had Maduro

The ‘Venezuelan people’ are whoever agrees with Donald Trump

The latest bizarre episode in the Trump presidency is currently playing out in Venezuela. Just weeks after President Nicolás Maduro’s inauguration, Trump officially recognized Juan Guaidó, the 35-year-old head of the National Assembly—a man who has never even run for president—as the rightful head of state. A White House statement (1/29/19) announced, “President Trump stands with the people of Venezuela as they demand democracy, human rights and prosperity denied to them by Maduro,” noting that the “people” had “courageously spoken out,” and that the US would pursue increased sanctions on the country.

More alarmingly still, Trump has continually threatened a military intervention in Venezuela (New York Times, 8/12/17), and his National Security Advisor John Bolton allowed himself to be filmed with a notepad that read, “5,000 troops to Colombia” (CNN, 1/29/19).

Before any troops are sent anywhere, we should ask ourselves, who exactly does Trump mean by “the people of Venezuela”? A recent local poll shows that 86 percent of Venezuelans oppose military intervention, while 81 percent already disagree with the current US sanctions.

U.K.’s Labour Party leader Jeremy Corbyn said Friday that intervention in Venezuela and calling for all sanctions against the government of Nicolas Maduro were “wrong” and that only Venezuelans have the right to decide their own destiny.

"The future of Venezuela is a matter for Venezuelans. U.K.’s Foreign Secretary Jeremy Hunt’s call for more sanctions on Venezuela is wrong,” Corbyn said in a tweet he posted Friday, his first reaction to the political situation in Venezuela.

“We oppose outside interference in Venezuela, whether from the US or anywhere else. There needs to be dialogue and a negotiated settlement to overcome the crisis.”

Oil-rich Venezuela is wracked with hyperinflation, rendering the bolivar currency practically worthless. Shortages in food staples and basic medicines are rampant and crime is widespread. More than 3 million Venezuelans have fled, causing consternation across the continent.

However, New Zealand’s foreign minister, Winston Peters, has refused to add New Zealand’s name to the list backing Guaidó. “It is not New Zealand’s practice to make statements of recognition of governments,” Peters said.

“Venezuela needs to decide its future through free and fair elections. This government expressed concerns about Venezuela’s elections in 2018, and these concerns remain.”

The economic crisis in Venezuela has forced millions of people to leave the country, as they can't afford basic goods such as food and medicine. In an attempt to buy in imports and meet the demands, President Nicolas Maduro has been using the country's gold reserves.

The Reuters news agency says he's planning to sell 29 tonnes of gold this month from the central bank vaults to the United Arab Emirates in return for cash in Euros. The United States is warning anyone involved in dealing in the gold faces Treasury sanctions. So will Washington take action against the UAE?

Your complete guide to the N.Y. Times’ support of U.S.- backed coups in Latin America

On Friday, The New York Times continued its long, predictable tradition of backing U.S. coups in Latin America by publishing an editorial praising Donald Trump’s attempt to overthrow Venezuelan President Nicolas Maduro. This will be the 10th such coup the paper has backed since the creation of the CIA over 70 years ago.

A survey of The New York Times archives shows the Times editorial board has supported 10 out of 12 American-backed coups in Latin America, with two editorials—those involving the 1983 Grenada invasion and the 2009 Honduras coup—ranging from ambiguous to reluctant opposition. The survey can be viewed here.