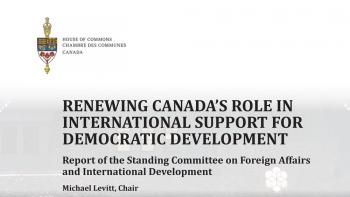 A report from the Standing Committee on Foreign Affairs and International Development reveals the Canadian political establishment’s desire to build a new “Democracy Promotion” institute. The report is titled “Renewing Canada’s Role in International Support for Democratic Development,” and was released in June 2019.

A history of Canadian “democracy promotion”

The report made clear that past “democracy promotion” work done by Canadian government connected NGOs would serve as inspiration for a new institute. The first significant example was the work of Elections Canada abroad, starting in the early 1980s. Elections Canada organized nearly 400 “international democratic development missions” in 100 countries around the world, from the early 1980s to 2007.

In 1986, a parliamentary committee report called “Independence and Internationalism” called for the creation of an “International Institute of Human Rights and Democratic Development.” Two years later, Canada’s parliament passed legislation which created the International Centre for Human Rights and Democratic Development. The Institute was finally constituted in 1990, with former NDP leader Ed Broadbent (from 1975-1988) serving as its first president. The report references a IRPP report which states that “during its first decade of existence, over 300 democracy assistance projects were supported in nearly 50 countries.” This included helping pay the living expenses of a Chinese dissident and poet living in Toronto, supporting efforts to build dissident movements in Yugoslavia and more [1].

The group would eventually change its name to Rights & Democracy.

In an article, Yves Engler detailed how Rights & Democracy gave its 2010 John Humphrey Award to the Venezuelan non-governmental organization PROVEA (El Programa Venezolano de Educacion-Accion en Derechos Humanos). According to R&D’s website, “The Award consists of a grant of $30,000 and a [December] speaking tour of Canadian cities to help increase awareness of the recipient’s human rights work.”

Rights & Democracy was shuttered down in 2012.

During the 1990s, Elections Canada expanded its “election monitoring and electoral support activities.” It highlighted that this included entering into capacity-building agreements with Mexico, where in 1991, three years after the 1988 presidential elections were rigged in favour of establishment candidate Carlos Salinas de Gortari, the ruling PRI and the opposition PAN approved a motion to burn all the ballots, removing all evidence of the fraud. A 2019 study in the American Political Science Review found "evidence of blatant alterations" in approximately one third of the tallies in the election. The other highlighted country was the Russian Federation, which had its 1996 presidential election rigged in favour of the US-backed candidate Boris Yeltsin.

Interestingly enough, EC indicated that its activities included as of September 2005,

A DAFIT briefing note not made publicly available, but made available to the DAFIT subcommittee, stated EC’s work abroad in more recent years:

“According to a 2006 DFAIT briefing note, these included ‘missions with the UN, OAS, OSCE, the Commonwealth and La Francophonie. Some of Canada’s most recent, high profile engagements in the area of democracy promotion have included election assistance in Iraq, Haiti, Afghanistan, the Ukraine, and the Palestinian territories. Afghanistan received a contribution of $13M in support of Afghanistan’s parliamentary, provincial and presidential elections.”

Notably, the Elections Canada page was changed to re-direct to a general information on Canadian elections page in June 2011.

CIDA is the prime example of Canadian interference in other countries. The organization is the prime dispenser of Canadian aid, and was merged with DAFIT to form Global Affairs Canada. It has worked with numerous partners such as Elections Canada and NGOs to push “democracy promotion” across the globe.

In 2003, a coup was hatched by Canada, France and the United States government in an Ottawa residence, targeting to Haitian government and president Jean Bertrand-Aristide. CIDA had been funding Canadian NGO’s such as Oxfam Quebec to spread smears and anti-government propaganda since the start of the 2000 elections. This funding ramped up after the 2003 meeting, with these NGOs both aiding the violent opposition-led coup in Haiti and providing political cover for the Canadian government’s clear support of the coup. The Royal Canadian Mounted Police acted as a pro-opposition militia force throughout the coup, working alongside US forces to hold down key points in the country, such as airports.

On February 29, 2004, Aristide was kidnapped in his residence and forcibly flown to the Central African Republic. An American puppet, former World Bank official, Boniface Alexandre, was installed into power, while thousands of Haitian government officials from the Aristide era were fired en masse.

Notably, in 2006 CIDA’s Canada Corps was renamed to become the Office of Democratic Governance.

President at the time, Robert Greenhill, told the committee that the Office of Democratic Governance is “explicitly to be providing additional funds to the already large amounts of money that we’re investing in CIDA and across the government on the issue of democratic governance.” Greenhill further noted that the office includes a Deployment for Democratic Development Mechanism, “a multi-million dollar initiative which will help CIDA recruit and deploy the best and the brightest Canadian expertise in democratic governance and respond quickly to needs on the ground.”

In human-speak, this means building up dissident figures and anti-socialist community organizers or social figures.

Canadian embassies also work with and provide funding to dissident groups in 120 countries through The Canada Fund for Local Initiatives, which has an annual programming budget of $16.3 million, with projects averaging $25,000 each.

In 2008, the Canadian Embassy in Panama teamed up with the National Endowment for Democracy to organize a meeting for prominent members of the opposition in Venezuela, Bolivia, Cuba and Ecuador.

Engler explained that “it was designed to respond to the ‘new era of populism and authoritarianism in Latin America.' The meeting spawned the Red Latinoamericana y del Caribe para la Democracia, ‘which brings together mainstream NGOs critical of the leftist governments in the hemisphere.’”

A May 2010 report from Spanish NGO Fride revealed that at the time, Canada was “the third most important provider of democracy assistance” to Venezuela after the U.S. and Spain.

In 2013, CIDA was integrated into DAFIT to create Global Affairs Canada.

In 2019, at the peak of the Lima group led coup attempt in Venezuela, with Juan Guaido as puppet leader, Justin Trudeau confirmed that GAC would disburse $53 million in aid to the country, to “trusted humanitarian groups.”

What will this new “democracy promotion” institute get up to?

They were unanimous in claiming that Canada was slacking off on “its role” of “democracy promotion” around the world.

One recommendation was to provide further capacity to GAC operations. Recommendation Seven of the committee stated that:

“Global Affairs Canada should create a dedicated entity within the department tasked with developing and implementing government policy on democratic governance and coordinating initiatives with partners, both in Canada and internationally.”

Having aid for “democratic development” stay true to Canada’s so-called feminist foreign policy was a priority for the committee.

Ukraine, Haiti and Afghanistan, along with other countries Canada has an established “aid” relationship with, were highlighted as those which Canadian “democracy promotion” should be focused on.

From the committee report:

“For their part, both Kevin Deveaux and Thomas Axworthy recommended that a renewed Canadian democratic development agenda should have a limited geographic scope. That would involve picking a group of countries, such as those where the Canadian experience is particularly relevant or where Canada has a well-established partnership, to focus its democratic development efforts.”

The report and committee witnesses called for a focus on working directly with foreign political parties, maintaining the recommendation of this committee’s 2007 report. Global Affairs Canada Executive Director Christopher MacLennan declared that “democratic development efforts” must extend beyond traditional institutional support, stating that there’s “the recognition that we needed more political approaches, for example, support to political parties.” The committee report seeked to cast off the deserved negative image which interference in political affairs brings to Canada, by claiming that “one or two degrees of separation” from the government, would magically make the institute able to act at “arms-length” from the government.

The report formally called for the founding of a new “democracy promotion” institute. It stated:

The report explained the committee’s view that this institution must actively work alongside Canadian NGOs and Global Affairs Canada:

Three approaches to purportedly maintain independence from the government are:

The institution would be allowed to seek funding from other donors as well as private sources. The committee noted approaches such as government appointed executive members, or rotation of the chair depending on which party is in power, as two potential options for governance.

It emphasized the importance of all-party support for this “democracy promotion” institute, which the NDP provided for Rights & Democracy upon its founding in 1990, which former NDP leader Ed Broadbent headed up from 1990 to 1997.

Aidan Jonah is the Editor-in-Chief of The Canada Files, a socialist, anti-imperialist news site founded in 2019. He has written about Canadian imperialism, federal politics, and left-wing resistance to colonialism across the world. He is a second-year Bachelor of Journalism student at Ryerson University, who was the Head of Communications and Community Engagement for Etobicoke North NDP Candidate Naiima Farah in the 2019 Federal Election.