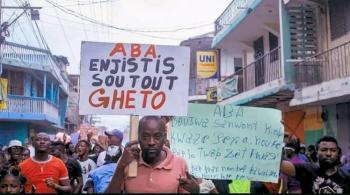 A protester (center) holds a sign reading "Down with injustice in all the ghettos" during a demonstration against Prime Minister Ariel Henry on Aug. 30, 2022 in Cap Haïtien. Photo: Frandy Pierre

Some banged spoons against aluminum plates, while others wrapped themselves in Haiti’s red-and-black flag or held signs that read “operation guard the dollar” and “we want a change.” They were all demonstrating against de facto Prime Minister Ariel Henry, demanding his resignation.

“Si Ariel pa ale, nap boule peyi a,” they cried. (“If Ariel doesn’t leave, we will burn down the country.”)

The Aug. 30 demonstration in Cap-Haitien was led by the political party Pitit Dessalines Platform (PPD) to protest against the low value of the gourde compared to the U.S. dollar, which has brought soaring consumer prices and a growing scarcity of gasoline and diesel. The thousands of demonstrators said that Henry is incapable of ending the country’s many crises.

“The State can’t get it done, the government can’t get it done,” said Moïse Jean-Charles, leader of Pitit Dessalines and former presidential candidate, as he stood in front of reporters during the protest. “That’s why we’re asking Ariel to leave.”

SINCE AUG. 22, LARGE DEMONSTRATIONS AGAINST ARIEL HENRY HAVE ALSO BEEN HELD IN PORT-AU-PRINCE, JACMEL, LES CAYES, PETIT-GOÂVE, AND OTHER CITIES.

“If they don’t drop the cost of the dollar,” Jean-Charles added during the protest, “the seventh [of September], the country will flip upside down from their hands. The seventh, we will break the system.” Demonstrations are scheduled for Sep. 7 in other cities as well.

Since Aug. 22, large demonstrations against Henry have also been held in Port-au-Prince, Jacmel, Les Cayes, Petit-Goâve, and other cities. This spree of protests is similar to the peyilòk, or country lockdown, demonstrations from September to December 2019 against the President Jovenel Moïse, who was assassinated on Jul. 7, 2021.

Pitit Dessalines is still demanding more action to increase the gourde’s value and for officials to end the $1.50 tax on remittances, a fee that was imposed by former President Michel Martelly in 2011.

Two people were killed during the Aug. 22 march in Port-au-Prince, and a boy was shot in the leg in Les Cayes.

No injuries were reported during the Aug. 30 Cap-Haitien protest. But on Sep. 2, the fourth consecutive day of the mobilization there, clashes broke out when the police fired tear gas and live ammunition to disperse demonstrators. In response, demonstrators threw stones at them.

In a press release, the Professional Association of Banks (APB) denounced the Aug. 30 remarks of Moïse Jean-Charles (without naming him) as encouraging violence against banks and their workers.

“By making threats, haranguing crowds already frustrated by the difficult situation in the country, to incite them to commit criminal acts is a dangerous and irresponsible act that can lead to an anarchic situation spiraling out of control,” the note said.

The APB alleged that “on Aug. 30, during the public demonstration organized by this same politician in Cap-Haitien, several bank branches, in the middle of a working day, had stones thrown at them for more than 45 minutes by an enraged mob, putting the lives of bank employees and customers in danger and causing material damage to some of our members’ premises.”

The bankers said they were not responsible for the volatility of the exchange rate, saying it was determined by the balance between the supply and the demand for a currency on the foreign exchange market. The APB argued that Haitian banks were “charging rates significantly below those of the informal market.”

The bankers ended with the threat that they were prepared “to prosecute all intellectual and material authors of acts affecting the integrity of the lives of their staff and to the safety of their property.”

A shorter version of this article was previously published on the website of The Haitian Times.