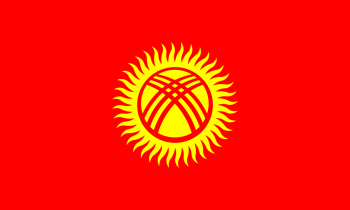 The Flag of Kyrgyzstan.

On May 14, 2021, President of Kyrgyzstan Sadyr Japarov approved a parliamentary proposal to temporarily establish state control over the Kumtor gold mine, the jewel of Kyrgyzstan’s extractive sector.  The mine is one of the largest in Central Asia, and in 2019 it accounted for almost 45% of the country’s industrial output.  Japarov’s move brought his administration into conflict with Centerra Gold, the Canadian mining company which has enjoyed majority control of Kumtor since 2003, and with the Canadian government itself.

Scott Perry, CEO of Centerra Gold, immediately announced that he would challenge Kyrgyzstan three-month period of state control, stating that “the hostile actions of the Government leave us no choice but to continue to protect the interests of Centerra and its shareholders through all legal means.”  Ottawa, for its part, eagerly aligned itself with multinational business against Kyrgyz sovereignty.

Minister of Foreign Affairs Marc Garneau and Minister of Small Business, Export Promotion, and International Trade Mary Ng released a joint statement in which they asserted that Canada is “disappointed” that the Parliament of the Kyrgyz Republic had decided to move ahead with the “imposition [of] Kyrgyz control [over] a publicly traded Canadian-based company with multiple international assets.”  Any plan to nationalize the mine, they concluded, “will potentially have far-reaching consequences on foreign direct investment in the Kyrgyz Republic.”

What Garneau and Ng neglected to mention were the reasons why the Kyrgyz parliament and the Japarov administration chose to appoint what they call “external management” over the Kumtor mine.  On May 8, the day after parliament authorized the state takeover of the mine, a court in Kyrgyzstan ruled that Centerra Gold had flouted the country’s environmental regulations.  The Kumtor mine resides at a high altitude in the country’s glacial zone in the east, and Centerra was discovered to be dumping mining waste in this area, exacerbating glacial erosion that is already occurring at worrisome levels due to climate change.

Environmental protection expert Kalia Moldogazieva explains that “the glaciers are one of the sources of water of the Kumtor River, which flows into Taragai River, and then to Naryn River – Syr Daria, the biggest transboundary river of Central Asia.”  The Kyrgyz government is therefore concerned that the continued flouting of environmental regulations by Centerra Gold will result in catastrophic levels of flooding and pollution not only of Kyrgyzstan’s water supply, but the waterways of the entire region.

The court levied a $3 billion fine against Centerra Gold for these offences (the fine did not include the $170 million of unpaid taxes which the company owes the Kyrgyz government).  Centerra’s shares nosedived as a result, but the company insists that the accusations are without merit, and that they are the target of unfair persecution by the state whose mineral resources it has been allowed to exploit for decades.

Environmental degradation has been a feature of the exploitation of Kumtor since it first became operational in 1997.  In 1998, the state held 60% ownership over the mine, while 40% belonged to a Toronto-based mining company called Cameco (rebranded Centerra Gold in a corporate spin-off in 2003).  That year, a horrible accident occurred: a truck from the jointly-owned mining company rolled into the river above the village of Barskoon, pouring 1.7 tons of sodium cyanide into the water.

Officials from the mine failed to notify the 6,500 residents of Barskoon about the dangers of the spill – in fact, Cameco president Michel Bernard assured villagers that the cyanide spill was not a cause for concern.  Shortly thereafter, the company agreed to clean the spill and offered compensation to those affected.  By this point, locals were growing sick and dying, and the village’s single export of apples had been destroyed.

Cameco eventually agreed on a settlement of $4.6 million, but journalist Bruce Pannier, who has travelled to Barskoon on many occasions over the past few decades, has noticed little improvement in the lives of the villagers.  “There were promises,” he writes, “[such as] a new school, a new medical facility [and] repairs to the road,” but material compensation has not yet reached the village.  Locals have attempted to organize in order to force the mine managers to distribute the promised funds.  They have occasionally succeeded in prompting a government review, but “over the course of the past 15 years, the case…has been returned to a lower court for review” every time.

The Barskoon cyanide spill served as a galvanizing moment for Kyrgyz people opposed to the careless exploitation of Kumtor minerals by unaccountable foreign capital and government officials.  For many, the complete nationalization of the mine is the only way to ensure that the local land is respected.  Protests erupted in the subsequent years, significantly impacting Centerra shares in 2005, 2006, and 2013 – but, over the same period of time, foreign control over the mine increased.  While the Kyrgyz government used to own 60%, by January 2021 it held a minority of 26%.

One of the participants in the movement against the irresponsible management of the Kumtor mine was Sadyr Japarov, the current president of Kyrgyzstan.  He played a prominent role in the anti-Centerra protests of 2012, and presented a document to the parliament in favor of the nationalization of the mine, which was rejected at the time.

During the 2021 presidential election, Japarov was thus able to market himself as an anti-establishment figure who would end the foreign exploitation of Kyrgyzstan’s domestic resources and hold accountable the corrupt government officials who collaborated with this exploitation.  He has significant support among the country’s miners, who have long felt that corrupt officials and multinational companies have collaborated against the shared interests of Kyrgyz workers.

Japarov’s predecessor, Sooronbay Jeenbekov of the Social Democratic party, was forced to resign when widespread anti-corruption protests took to the streets in October 2020.  Although the protests’ immediate spark was a combination of poor pandemic management and vote-buying allegations against the ruling party in that month’s parliamentary elections, the Kumtor mine also become a focus of the protestors, some of whom besieged Centerra’s offices in Bishkek while others burned company equipment at their worksites.  By the time new presidential elections were held in January 2021, the national conservatives proved to be the most organized political faction to emerge from the protest movement.  Election turnout was approximately 40%, and Japarov’s Ata-Zhurt party won with 80% of the vote.

As president, Japarov initially took a more conciliatory tone toward Centerra, offering to “review gold mining agreements” rather than aggressively pursuing nationalization.  By May 2021, however, he finally began to implement the nationalization plans.  Not everyone thinks he has Kyrgyzstan’s best interests at heart: government critics claim that he will back down from a complete nationalization, and that he is using this popular issue to distract from his government’s perceived mishandling of a territorial dispute with Uzbekistan and an armed border incident with Tajikstan that stretched from April to May.  Others assert that he is simply trying to collect fines from Centerra in order to pay back Kyrgyzstan’s $5 billion debt to China, or that he plans to transfer the mining rights to Russia on the expectation that the Putin administration will help him pay off these outstanding funds.

Whatever Japarov’s plans for Kumtor, however, Centerra’s disapproval is unsurprising.  What is more revealing is how quickly and firmly the Canadian government came out against the nationalization.  Ottawa’s position on this matter gestures toward one of the central organizing factors of modern Canadian foreign policy: unconditional support for the global proliferation of Canada-based mining companies.  75% of the world’s mining companies are registered in Canada, and both Liberal and Conservative governments have long viewed the promotion of the extractive sector as one of their primary foreign policy goals.

Canada’s foreign aid and direct investment is directly tied to the promotion of multinational business.  When Prime Minister Stephen Harper merged the Canadian International Development Agency (CIDA) with the Department of Foreign Affairs to create the Department of Foreign Affairs, Trade and Development (DFATD), many liberal (and some left-leaning) Canadians were outraged.

The implication of the merger was that Canada would only offer development aid to underdeveloped countries if such arrangements benefitted multinational Canadian enterprise, a disproportionate percentage of which operates in the extractive sector.  However, the Liberal PM Justin Trudeau consolidated Harper’s merger.  He simply renamed the department (DFATD became “Global Affairs Canada”), refusing to uncouple development aid from the promotion of private business.

Canadian embassies across the Global South have historically served as ambassadors for Canadian companies more than the Canadian people.  This is evidenced by the Canadian embassy in Ecuador’s interference in President Rafael Correa’s 2009 review of foreign mining contracts.  Furthermore, Canadian embassies in Bucharest, Brussels, and Budapest were instrumental in lobbying on behalf of Gabriel Resources’ controversial mining project in Romania’s Rosia Montana.  Raphael Girard, former Canadian ambassador to Romania, later became Director of the Board of Gabriel Resources.

These examples only scratch the surface of the Canadian government’s assistance of harmful business practices around the globe.  Garneau and Ng’s statement of approval regarding Centerra’s activities in Kyrgyzstan is just one more episode in a long history of Canada’s diplomatic support for the worst excesses and abuses of its multinational extractive sector.  As Japarov moves forward with his nationalization plans, he should fully expect to confront further legal and diplomatic challenges not just from Centerra Gold, but also from the company’s loyal partners in Ottawa and Canadian embassies across the region.

Owen Schalk is a writer based in Winnipeg. His areas of interest include post-colonialism and the human impact of the global neoliberal economy. His political analyses have appeared in Canadian Dimension, Dissident Voice, and People’s Voice, and his short stories have been published by Fairlight Books, antilang., whimperbang, and more.