The challenges of reforestation in Haiti 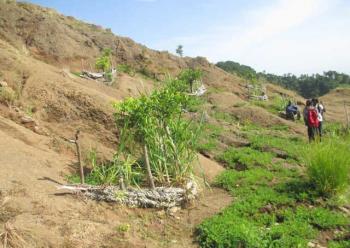 Hillside resoration in Doucet, Haiti in 2013. The plants spreading on the right are peanuts.

Reforestation and soil conservation programs costing many hundreds of thousands of dollars in the Petit-Goâve region have resulted in hundreds of small ledges built of straw or sacks of earth. Eight to ten months later, in certain areas the earthworks seem to be lasting. But in many others, these little “shelves” have disintegrated.

The construction and destruction of the anti-erosion ledges – all made with development assistance and humanitariandonations – offer an example of how at least some of Haiti’s reforestations projects turn out. In some cases, at least, they could be considered vicious circles.

In the years since the 2010 earthquake, the 11th and 12th communal sections of Petit-Goâve, 60 kms. southwest of the capital, have hosted many soil conservation and agricultural programs. The UN’s Food and Agricultural Organization (FAO), Helvetas, and Action Agro Allemande (AAA), sometimes working with a local development organization – Mouvman Kole Zepòl (MKOZE) – carried out several projects aimed at rehabilitating the watershed of the Ladigue River.

Read the full article on the HGW website:
http://www.ayitikaleje.org/haiti-grassroots-watch-engli/2013/11/19/the-challenges-of-reforestation.html