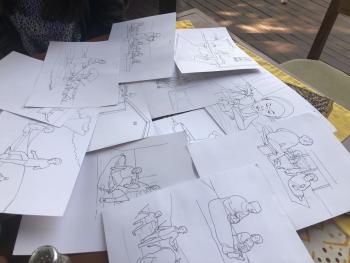 According to UNESCO, some 250 million children globally leave grade school without proficiency in reading or writing. And in developing countries like Rwanda, children must learn not one, but two languages (their local and their national language) to avoid falling into poverty. But to get more kids reading, more children’s books in local languages are needed—a challenge that the nonprofit NABU.ORG is taking on.

“Ultimately, our goal is that children gain fluency in the language of business or entrepreneurship, whatever the national language is, so that they can succeed in fulfilling their potential,” said Tanyella Evans, CEO of NABU.ORG (a new iteration of the former nonprofit Library for All, which she co-founded in 2013). Fluency in a local language, she explained, makes children more adept at becoming fluent in a second national language, be that English, French, or Arabic.

With a presence in Rwanda, Haiti, and the Democratic Republic of Congo (DRC), NABU.ORG considers itself the first global publishing network of its kind. Though it’s hardly the only literacy nonprofit working in developing nations, NABU.ORG sets itself apart in its aims to distribute a tech-driven, global supply chain of original children’s books in local languages, while supporting the local writers and illustrators who create said books.

The lean team includes Evans; her co-creators, Isabel Sheinman and Taniya Benedict; and two directors, Amos Furaha and Francoise Thybulle (who are based in Rwanda and Haiti, respectively), plus a handful of other full-time employees and interns.

At the heart of NABU.ORG’s operation is its app. The reading app, loaded with e-books for kindergarten through third grade reading levels, is currently available to all for free in Rwanda (downloadable from the Google Play store), and accessible on a limited basis in Haiti and the DRC. The nonprofit works with around 30 schools in Haiti, where the app is used in the classroom, but the team wants the app to be used in homes, as well.

“With our technology, we’re really standing on the shoulders of giants,” Evans said, explaining that the app itself uses the open-source code of the New York Public Library’s reading app, but it’s tailored to perform well in areas with low-bandwidth internet. The app also relies on a partnership with Sony, which provides digital-rights management, allowing the app to also offer copyrighted material. In other words, authors can have their work on NABU.ORG and won’t have to worry it being pirated.

In order to pursue its mission “to create a literate world,” NABU.ORG has been working to develop both supply and demand for more children’s books in local languages. Developing demand has meant partnering with other organizations in the literacy space, including schools, government bodies, fellow nonprofits, and foundations. Its first partnership in Rwanda was with Imbuto, the foundation that’s chaired by the first lady of Rwanda, Jeannette Kagame. The local director in Rwanda, Amos Furaha, has also been creating grassroots campaigns, which are disseminated via radio and word of mouth, like a recent effort that encouraged teachers to embrace tech and download the NABU.ORG app.

In turn, developing the necessary supply of children’s books in local languages is no easy feat. Evans explained that this realization came during a pilot program the team held in Cambodia in 2015. The app was loaded with 50 books in Khmer and 50 books in English from local publishers. Evans and her team watched as traffic on the app spiked, then plummeted in the first few months. “We thought, ‘Oh no, is there something wrong with the technology?’ But it just turned out that they’d read every single book [in Khmer] on the reading app,” she explained. The children barely touched the English content, and they were out of books in Khmer to add to the app. It quickly became clear that there was a need for more content in the children’s native language.

NABU.ORG’s solution is to hold writer workshops, where the team can train and pay locals to develop content that will not only be age-appropriate, but will also resonate with the community, given that it is homegrown. The first workshops were held in early 2017 in Haiti, with 50 local authors—an author can be anyone who has a story to tell, Evans said—who met with Francoise Thybulle, NABU.ORG’s director in Haiti, to write new books in Haitian Creole for the app. They used a software called Bloom, which guides authors through the writing process and automatically “levels” their content so that it meets the needs of specific reading groups. If an author is writing a story for kindergarteners, it tweaks their content to ensure that there aren’t too many words on a page, or words with too many syllables.

Evans noted that with Thybulle’s encouragement, writers developed stories that spoke to the rich history and culture of Haiti. The U.S. AID grant that funded the workshops asked that they create 150 new books in Haitian Creole, but the enthusiastic writers created some 260. The app allows users to pull in free-use images to illustrate the stories, but the authors recruited a local illustrator, Audeva Joseph, who created imagery for all of the books. The experience inspired the nonprofit to begin recruiting illustrators in Rwanda, and to create imagery during future writer workshops.

In the year or so since the initial workshops, NABU.ORG has held some small training sessions to further test the model with writers in New York, but the team’s primary focus has been on developing a sustainable model. They’re seeking funding to be able to hold more writer workshops, but also, importantly, they’re working on making their technology allow local authors and illustrators to work independently without hands-on assistance from the nonprofit’s team.

Being able to pay those authors will also be a challenge. While funding to date has come from donations and grants, Evans hopes that she and her team will soon find ways to monetize through marketing efforts and working with brands to develop sponsored collections of stories.

Evans envisions that, in the future, the app will be available worldwide, and will have something for everyone—“for parents, for the young student that wants to start entrepreneurship, and for the child,” she said.

During the workshops in Haiti, she explained, several authors organically created stories about empowering women and girls. In one, a small girl has a deep desire to play football, but a groups of boys won’t let her; with encouragement from her mother, she ultimately finds a way to play. “There were all these stories that reinforce girls as protagonists in their own culture,” Evans reflected. “I think that is incredibly powerful.”