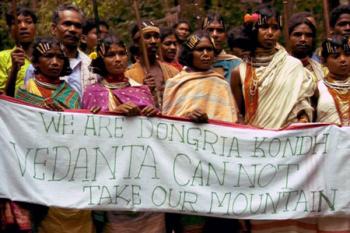 A Canadian government-linked investment fund has poured more than $100 million dollars into a mining company in India blacklisted by the world’s largest sovereign wealth fund for “systematic human rights violations,” according to a VICE News analysis of Export Development Canada’s (EDC) lending portfolio.

“There continues to be an unacceptable risk that your company will cause or contribute to severe environmental damage and serious or systematic human rights violations,” Johan H. Andresen, a senior official with the Norwegian fund, wrote in a letter to Vedanta after studying the mining firm’s operations. “Following its assessment, the Council has decided not to recommend the re-inclusion of Vedanta in the Government Pension Fund Global’s investment universe.”

The Church of England (COE), Martin Currie Investment Pensions, and other investors have also dumped the company on human rights and environmental grounds.

Critics say EDC’s support for Vedanta when other large investors are rejecting the company shows the Canadian agency has weak oversight when it comes to tracking the human rights and environmental records of companies it finances. EDC documents do not provide a breakdown of where Vedanta spent the money or exactly how much support the company receives.

“I am troubled by the promotion of Canadian investment abroad in the absence of strong regulatory measures that restrict lending and promotion to businesses that uphold ethical and human rights principles,” Ricardo Grinspun, an economics professor at York University told VICE News of EDC’s lending.

EDC rejects those claims. The fund with more than $112 billion in loans and other investments on its balance sheet reviews “every single one” of its deals to make sure they meet human rights and environmental criteria, an EDC spokesperson said.

“EDC’s team was aware of the [Norwegian] fund’s decision, but was also equally aware that a number of banks and third parties are noting improved performance on the part of Vedanta over the past year,” EDC official Phil Taylor told VICE News.

EDC made its financing deals with the blacklisted company through Cairn India, an oil and gas firm that was later acquired by Vedanta, Taylor said.

“Cairn is very well regarded as a CSR (Corporate Social Responsibility) leader in India,” he continued. “EDC is confident that Cairn will continue to operate efficiently under the new management system, given its past performance.”

Human rights groups, however, are not convinced given Vedanta’s track record in India.

Amnesty International has accused the firm of “seriously undermining the quality of life and threatening the health” of thousands of people in Indigenous communities in eastern India’s Orissa State where Vedanta has operated.

Vedanta did not respond to calls or emails from VICE News through its London-based public relations firm or via its main office in India.

The Vedanta case raises broader questions about the EDC’s lending strategy and its accountability to Canadians, Karyn Keenan, a lawyer with the Ottawa-based advocacy group Above Ground.

Canada’s international trade and investment agreements mean that EDC cannot mandate foreign companies to buy Canadian products, she said, leading to a situation where a crown company designed to help Canadian exporters is lending money to a mining and energy company listed on the London Stock Exchange, which does most of its business in India and sub-Saharan Africa.

In contrast to other government departments or state agencies, a full accounting of EDC’s relationships with the companies it finances cannot be obtained through the Access to Information Act.

“There is a lack of transparency,” Keenan told VICE News.

The EDC says some of its documents are excluded from freedom of information rules due to the need to protect the commercial confidentiality of private firms who do business with the lender.

The problem, says Keenan, is that companies generally provide EDC with information about their due diligence and monitoring when it comes to human rights and environmental compliance.  Because that information comes from private companies, it is often not accessible to watchdog groups like hers who want to see what sorts of due diligence standards companies financed by EDC are reporting.

The EDC, like similar export credit agencies in other western countries, was initially designed to provide loans or risk insurance to domestic companies who couldn’t easily access those services through traditional banks, she said.

Providing support to multinational firms who have easy access to bank loans doesn’t make sense for a Canadian government-backed institution, she said.

Trade and investment deals signed by Canada mean that EDC cannot mandate companies to buy products from domestic suppliers as a condition for receiving loans, Keenan said, questioning the organization’s broader benefit in light of human rights concerns in its portfolio.

EDC says that view is not backed by evidence. EDC’s loans, networking events and other policies are crucial for Canadian suppliers, especially small and medium sized firms, when they are trying to sell to larger international companies, Taylor said.

Those loans, even if they are going to companies like Vedanta rather than Canadian firms help domestic exporters gain exposure to the big players, he said.

“We want to create more opportunities for Canadian companies to get into the supply chain,” Taylor said, and giving loans to big firms and then introducing them to Canadian suppliers has been effective in opening those doors.

Moreover, EDC is profitable for Canadian taxpayers; the crown corporation paid $786 million to the Government of Canada as a dividend in the first quarter of 2017 alone, according to company documents.