Dispatches from Haiti:Haiti and history 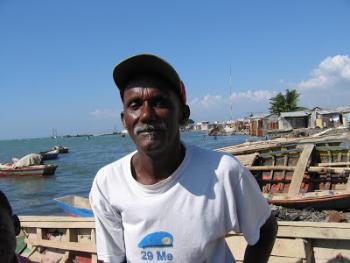 “HAITI was already an island of unimaginable suffering, a country ravaged by war and roving gangs where four out of five residents lived in extreme poverty. Then, in less than a month last year, four vicious storms lashed it, killing up to 800 people, leaving as many as 1 million homeless and inflicting at least $1 billion in damage — 15 percent of the country’s gross domestic product. The State Department cautions visitors that there are no “safe areas” in Haiti, and that “kidnapping, death threats, murders, drug-related shootouts, armed robberies, break-ins and carjackings are common.” Yet, it is U.S. policy to deport the estimated 30,000 Haitians in this country back to this hotbed of violence and squalor. The United States grants temporary protected status (TPS) to immigrants from countries with extreme economic or political conditions; Haitian immigrants more than qualify.”

The above paragraph is from an editorial submitted to the Washington Post by the Institute of Justice and Democracy for Haiti.

However, this editorial is not from yesterday or the day before. It was published on March 30, 2009–eleven years ago.

And since this editorial was published, Haiti has not improved.

Nine months after this editorial, on January 12, 2010, an epic earthquake hit Haiti and killed several hundred thousand people and made over one million people homeless or at least too afraid to set foot inside their “fissured” houses.

And so the Obama administration subsequently granted temporary protected status (TPS) to Haitians in the States if they met certain criteria.

The idea for Haiti in the early 2010s was to “build back better.” And even though this sounded good, and even with billions of dollars “pledged” to Haiti to make this happen, it didn’t.

Ten months after the quake, in October 2010, Haitians living along a river in central Haiti started dying quickly of severe vomiting and diarrhea. And thanks to unknowing UN soldiers dumping their cholera-laden feces into the river, Haiti’s cholera epidemic became the largest in the world–infecting well over 1 million people (my count…not the official count).

In the years that followed, Chikungunya and Zika viruses sickened almost every Haitian who was still breathing, and congenital Zika left too many Haitian babies with significant neurologic damage from underdeveloped brains.

And in 2015, the Dominican Republic thought it would be a good time to deport hundreds of thousands of people with Haitian blood back to Haiti. And these deportees became stateless people caught between two countries–neither of which wanted them or had anything to offer except hot and filthy refugee camps up and down the border.

Category 4 Hurricane Matthew blew in one night in October 2015 and it destroyed 90% of Haiti’s southwest. People, goats, chickens, and crops got blown away and destroyed very quickly. However, Haitian resistance and persistence kept on keeping on. I saw medical records scattered along a beach next to a semi-intact little hospital in Port Salut whose staff continued treating tired cholera patients like nothing happened.

2018 and 2019 were not good years for Haiti either. Gas prices were high, inflation was high, food prices were high, and government corruption remained high. Civil unrest shut down Haiti for much of 2019. Hospitals did not function and Haitian kids did not go to school for months on end.

Coronavirus is in Haiti now in early 2020. Black people, believe it or not, are NOT protected from this virus (see Chicago and Peoria and New York City). My Haitian friends are afraid…at least those who believe that the virus exists and is not just “fake news” that their government is making up.

After while Haiti has their coronavirus epidemic, the predicted hunger/starvation epidemic should occur at the same time. Several million Haitians are on the verge of starvation. And who will help them now?

And like the mid-2000’s, well-financed and equipped Haitian gangs create fear and unrest when they go on their killing sprees and block roads and kidnap and such. Several days ago the Haitian National Police, who have not received a paycheck for quite some time, announced that all the people in the Village of God zone of Port au Prince needed to leave their shacks and get out within 72 hours so the police could come in and root out the malevolent gangs. The people who flee have nowhere safe to go.

We’ll see how that works out.

And in the past month, the Trump administration has sent back to Haiti about 180 people from the States. These men, women, and children were held by ICE and were welcomed to return by Haiti’s smiling Prime Minister. And after arriving in Haiti, three deportees allegedly had coronavirus confirmed by testing by the Haitian public health department.