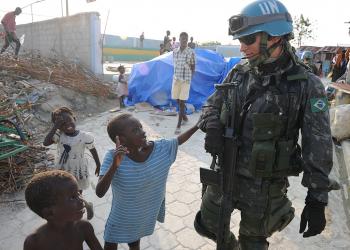 In 2017, in the face of increasing revelations of sexual abuse by UN peacekeepers, Secretary General Guterres announced a “new approach” to bring an end to what he described as a “scourge” on the United Nations. A core component of this approach is a commitment to putting the rights and dignity of victims of UN sexual exploitation and abuse (SEA) at the forefront of the UN’s response, including through the appointment of a Victim Rights’ Advocate (VRA) who will ensure access to “appropriate and timely judicial processes” and that the “full effect of local laws, including remedies for victims, are brought to bear” in SEA cases.

Both prior and since the launch of this new approach, the Institute for Justice & Democracy in Haiti (IJDH), in collaboration with our Haitian partner organization the Bureau des Avocats Internationaux (BAI), have been pursuing child support claims in Haiti on behalf of victims of SEA. To our knowledge, they are among the first cases of their kind worldwide. Our experience provides a unique insight into the disconnect between the UN’s policies and reality on the ground, underscoring the need for structural change to make access to child support from peacekeepers a reality.

The UN’s Position on Peacekeeper Paternity.

Sexual abuse and paternity claims against UN peacekeepers are not new. In 2005 Prince Zeid, then Special Advisor to the Secretary General, released a seminal report on SEA. In it, he underscored the desperate situation of women with “peacekeeper babies”, argued that UN personnel must be obliged pay child support and proposed that the Secretary-General should be able to impose fines, deduct from staff salaries, withhold payments to peacekeeping contingents and require DNA tests to enable this (see paras. 72-77).

The Zeid Report recommendations on paternity were not fully adopted, although the UN did begin to facilitate (though not require) some DNA testing in 2014. In 2007, the UN also adopted the Comprehensive Strategy on Assistance and Support to Victims of Sexual Exploitation and Abuse and in 2009 produced the SEA Victim Assistance Guide. Collectively, these documents establish the UN’s commitment to facilitate paternity and child support claims. This position is further underscored in the Secretary General’s 2019 report on SEA.

Sexual exploitation and abuse has plagued the UN’s presence in Haiti. In 2016 the BAI, one of the country’s leading human rights law offices, began working with victims who had fallen pregnant to and been abandoned by peacekeepers. Almost all were in desperate living situations: some were homeless, most could not adequately feed their children or send them to school. Child support was one of their key priorities.

Against this background, in August 2016, the BAI sent legal notifications to the UN Stabilization Mission in Haiti (MINUSTAH), directly and via the Haitian Ministry of Foreign Affairs, informing the Secretary-General’s Special Representative (SRSG) of its intention to file child support suits. The notifications requested that the UN facilitate the claims in line with its recognized commitments, including in particular by:

Each of these requests went to critical information that would enable the claims to move forward effectively, and to which our clients had no other means of gaining access.

The UN did not respond. In January 2017, the BAI wrote to the Haitian Ministry of Foreign Affairs reiterating the request, and in the following months IJDH and BAI worked with media to ensure the UN was aware of the cases through press coverage and inquires. Finally, in December 2017, having still had no response, BAI filed the claims in Haitian courts without the UN cooperation requested.

Over a year and a half later, several of the cases remain pending in Haiti. The UN has, with limited exceptions, failed to respond to the BAI’s reasonable requests for cooperation, gravely undermining our clients’ ability to pursue their claims. At every step in the cases we have faced obstacles that have made justice almost impossible. This has occurred despite the personal engagement of the VRA, who visited the BAI and met with our clients in April 2018.

The Long Shadow of Immunity

In theory, immunity should not be an obstacle to UN child support claims, unlike criminal prosecutions of peacekeepers (under the UN Model Status of Forces Agreement countries retain exclusive jurisdiction over their military peacekeeping personnel for criminal offences, while for civil cases both military and non military peacekeeping personnel have only “functional immunity”). Section 52 of the Status of Forces Agreement between the UN and Haiti, which regulates the presence of peacekeeping forces in the country, provides that the SRSG shall be immediately notified if a civil proceeding is instituted in Haiti against a UN personnel. If the SRSG certifies that the case is not related to the personnel’s official duties, “the proceeding may continue”. The UN has also repeatedly clarified that there is no immunity for SEA. It was in this context that the BAI requested the UN’s certification that immunity was no obstacle to our cases.

In practice however, the UN has asserted immunity, hampering our clients’ claims at every turn. First – despite its commitment to facilitating paternity claims and even though the cases are not against the organization directly – the UN has refused to accept any legal service regarding those claims at its premises. This means that there is no official direct way to inform the UN that a civil case has been instituted, or request its cooperation. Still more concerning, the UN appears to have ignored an order from a Haitian court, issued in 2018, that required the SRSG to appear and provide the information requested by the BAI. Finally, to our knowledge the SRSG has still failed to certify to the Haitian government or courts that functional immunity does not apply in the cases, thereby creating a chilling effect on the courts’ willingness to hear the claims.

Secondly, the UN appears unwilling to share key evidence in its possession, or to recognize BAI as legal representative of the claimants and relay evidence and updates accordingly.  Almost three years after our initial request, the UN has still not provided BAI information about the names and identifying information of the defendants – making service and eventual enforcement of judgment in the cases near impossible – or shared the results of UN internal investigations into the women’s cases. No explanation has been provided for this failure.

In 2018, the UN did belatedly begin to provide some confirmation of DNA results, but did so by reaching out to the claimants directly while failing to inform the BAI, leading to further delays and confusion. Further, in many cases information was shared so late that the evidentiary basis of the case had already been undermined.

The net result is that the claimants in these cases must try to bring cases without access to critical evidence, and with no means to compel the organization who holds that evidence to assist and cooperate with them.

No framework for enforcement of judgments

Finally, even if victims can overcome these obstacles, the UN appears to have no realistic plan to ensure enforcement of any eventual judgment. The model MOUbetween the UN and troop contributing countries (TCCs) appears to envisage that child support claims would be determined by the TCC’s courts, but does not speak directly to recognition and enforcement of a host state judgment. Further, the assumption appears to be that any action for recognition and enforcement of a Haitian court’s decision would be brought by the claimants themselves, or the Haitian state on their behalf. Even leaving aside the obstacle of locating the father when the UN has provided no identifying information, to expect SEA victims to find legal representatives in TCCs and undertake transnational litigation to obtain child support seems highly unreasonable (see Olivera Simić & Melanie O’Brien, ‘Peacekeeper Babies’: An Unintended Legacy of United Nations Peace Support Operations, 21 International Peacekeeping, 345 at 356). The Haitian state meanwhile, is unlikely to have the capacity and resources to undertake such an action. This is unsurprising: almost by definition, any country hosting a UN peacekeeping force will be facing serious capacity gaps within its government.

The reality is that the current system makes it near impossible to obtain child support from peacekeepers. Addressing the UN’s paternity problem requires structural reform, including ensuring an accessible claims mechanism for SEA victims, and proactively meeting child support obligations by withholding payments from responsible UN personnel and peacekeeping troop contingents. Such an approach is consistent with Prince Zeid’s proposal fifteen years ago that the UN withhold the allowances of any soldier found guilty of SEA from future payments to relevant TCCs, and apply the withheld payments to a victim trust fund and/or meeting child support obligations. It is also consistent with the UN’s existing policy on Family and Child Support Obligations of Staff Members, which enables the UN to garnish staff member wages if the staff member fails to comply with a family support court order. Moreover, the foundations for a proactive approach to peacekeeper child support are in place: the UN already withholds payments from peacekeepers who have been repatriated for SEA, and the General Assembly has approved transferring withheld payments to the Victim Trust Fund. Directly meeting child support obligations through withheld payments would require the UN to do more than merely facilitate claims, but this reorientation is necessary. The alternative is to continue facing the same crisis, and the same failure, for years to come.

Sienna Merope-Synge is a Staff Attorney with the Institute for Justice & Democracy in Haiti (IJDH). In partnership with its Haiti-based partner, the Bureau des Avocats Internationaux, IJDH advocates, litigates, builds constituencies and nurtures networks to create systemic pathways to justice for marginalized Haitians and to hold international human rights violators accountable for their actions in Haiti.