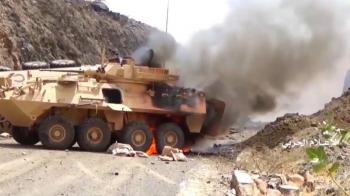 Screen shot from video in September that appears to show a light armoured vehicle.

Canada claims it has found no evidence linking its military exports to human rights violations committed by Saudi Arabia, even after video and photos of Canadian military goods have appeared amid the Yemen conflict between the Saudi-led coalition and Houthi rebels.

“There is no substantial risk that current Canadian exports of military equipment or other controlled items to KSA would result in any of the negative consequences,” reads a memo from Global Affairs addressed to former foreign affairs minister Chrystia Freeland.

Footage of Canadian-made light armoured vehicles (LAVs) has been captured over the last few years, as Saudi forces and Houthi rebels battle along the Saudi-Yemen border.

Global News was not able to independently verify the video.

Arms control advocate Cesar Jaramillo said there is an overwhelming amount of evidence to show Canadian military exports are appearing in areas of the Kingdom and in Yemen, where human rights violations are occurring.

“It’s like unless you see a weapon with a maple leaf killing civilians, there is complete unwillingness to recognize risk.”

Global Affairs did not immediately respond to questions about the memo or the recent images allegedly showing Canadian LAVs in Yemen. Doug Wilson-Hodge, spokesman for General Dynamics Land Systems-Canada, declined to comment on the videos.

The Trudeau government had announced a review of all Canada’s existing arms sales to Saudi Arabia in the fall of 2018, after reports emerged that the Saudi government was behind the murder of journalist Jamal Khashoggi.

The moratorium, however, did not affect the controversial $15-billion deal with the Kingdom to export more than 700 combat vehicles, produced by General Dynamics Land Systems-Canada at its plant in London, Ont.

The Trudeau government has faced sharped criticism over its continued support of the Saudi deal, as the country has a lengthy history of human rights violations that include unlawful killings, forced renditions, forced disappearances, and torture of detainees by government agents.

The memo also acknowledged that the Kingdom has been accused of “gross violations of international human rights and humanitarian law due to its role leading a military coalition in Yemen.”

The conflict in Yemen has seen thousands of civilians killed by Saudi-led coalition airstrikes and more than 24 million people in need of humanitarian aid.

Global Affairs said any reports of Canadian LAVs along the Saudi-Yemen border are irrelevant because those vehicles are from earlier export deals, not the current $15-billion agreement.

“Any Canadian-made vehicles on the KSA-Yemen border are not the LAVs currently being exported by GDLS-C, but older vehicles that were shipped under contracts dating back to the early 1990s,” the memo said.

“There are no confirmed reports of Canadian-made military equipment being deployed by KSA on Yemeni territory. This is consistent with [Saudi Arabia’s] role within the coalition, which is primarily to lead and coordinate aerial engagements.”

“There is a clear connection between the current $15-billion deal and the older vehicles shipped during the 90s,” Fenton said.

“Yemen is a heinous war… nobody should be shipping weapons to help fuel this conflict.”