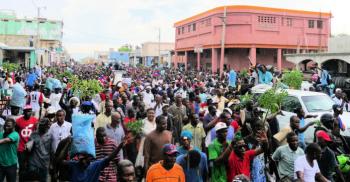 Thousands marching in Port-au-Prince in May 2013. “The alternative must be an alliance of all the healthy forces of the nation, of the conscious, consistent, and indisputably nationalist, anti-imperialist, and pro-working class parties and popular organizations.” Photo: Kim Ives/Haïti Liberté

The new society will rise from the ashes of the old,” the German communist Karl Marx famously wrote.

We must now begin to rebuild the new Haiti. The complete collapse of the old order has occurred. There is not one elected official, not one institution that is functional, not one shred of legitimacy left.

This shameful situation is a direct consequence of bad governance, corruption, and all the corollaries which only plunge the country into ever-deeper crisis.

Can we build a new Haitian order? Yes, we can! But an architectural schema is necessary. It is not the one that de facto Prime Minister Ariel Henry has undertaken under orders from his guardian powers. Nothing is yet set in stone, and everything remains possible for Haiti to rise from its ashes. Here are our propositions for the five pillars necessary for the building of a just, sovereign, prosperous, new society.

1) No to Foreign Intervention

Nothing good or lasting can result from allowing the same imperialist powers – which have exploited our resources and labor power, sabotaged our efforts to launch democracy, and led us into this political and economic quagmire – to posture as our expert benefactors and pretend that they can lead us out. How can they now feign that they can free us from their barbarity?

No packaging changes this fundamental reality. The U.S. has tried and will try several different formulae: the United Nations, the Organization of American States, and, lastly, a regional or global conglomeration of puppets and allies, called something akin to the “Coalition of the Willing” that they concocted as an international cover for their illegal 2003 invasion of Iraq. Any solution cooked up by the imperialist “laboratory” will contain poison for Haitian self-determination. The Haitian people must forge their own solutions, as our ancestors did.

Resistance is the first condition for victory. The Biden administration has now rolled out a new program to offer Haitians two-year work visas. This is a distraction and a mirage. It just offers people a dead-end solution to abandon their country at its most critical hour. Imperialism always tries to brainwash the exploited and oppressed, diverting them from becoming catalysts for change and reconstruction in their country. Haiti’s diaspora needs to spend its hard-earned salaries to support Haitians fighting for change inside Haiti, not enriching U.S. capitalists, large and small. This is always capitalism’s strategy, to first sell off impoverished countries’ independence and then, through misery and hunger, force people to turn their backs on their homeland’s future instead of addressing and shaping it.

The notion being pedaled today about political “accords” is that “the more signatures, the better.” Many of the signatures and organizations are fraudulent. It is a complete illusion that any national “consensus” (moreover rigged) can be achieved. Haiti, like other neo-colonies, is divided into antagonistic classes, where a ruling class survives off the labor of the other: capitalists vs. workers and big landowners vs. landless peasants.

By the most classic divide-and-rule policy, Washington has bet on Ariel Henry to govern the country. At the same time, it makes promises to the Montana Accord. We, the Haitian masses, must refuse to march under the leadership of the Haitian bourgeoisie and grandon interests that predominate in the ruling-class-led opportunist coalitions of Musseau, Montana, Pen, Karibe, etc.

The alternative must be an alliance of all the healthy forces of the nation, of the conscious, consistent, and indisputably nationalist, anti-imperialist, and pro-working class parties and popular organizations. This could include any progressive organization that truly defends and stands with the underprivileged masses’ interests, especially in the ghettos.

No group is perfect. It is enough that sincere, devoted, trustworthy, principled militants predominate in their leadership. We must struggle to achieve effective and complete unity nationwide: a progressive united front, dedicated to a true revolution in Haiti. Only a coalition of the exploited and oppressed can lead us to this objective.

The first stage will be to constitute a government of national and popular unity. Then comes the second, perhaps the hardest, stage: trying to survive the counter-revolutionary backlash and the assault of the imperialist powers.

The new regime will not survive through concessions or compromise with the imperialists. Its survival will depend on forthright mutual solidarity with all progressive nations and fraternal peoples struggling to transform their society.

Our ancestors’ glorious victory marked the beginning of the end of chattel slavery and colonialism worldwide. The present and future generation of Haitians can once again usher in a new era in human history. We are capable of it!

Therefore, it is fitting to close with another quote from Karl Marx: “If you can cut the people off from their history, then they can be easily persuaded.”

Let us not be severed from our history, let us remember who we are, and let us resist the pressure of our oppressors to surrender our sovereignty and bright vanguard future in our courageous struggle for freedom and socialism so that Haiti can finally rise from its ashes.