Haiti: Betting on the Montana Accord 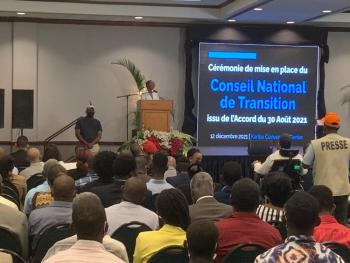 The events preceding the assassination of President Jovenel Moïse—and even more so, its aftermath—highlight the near collapse of Haitian public authority. Most alarmingly, they point to a transition from state decay to what is, in fact, the absence of a state presence in most arenas of national governance. As of early 2022, competing civil society and political party platforms are vying to replace the vestiges of the Haitian government vested in its interim prime minister, Ariel Henry. These dynamics converged on Monday, February 7, which was supposed to conclude the late president’s term and (by implication) Henry’s. Now what?

The ongoing political conflict in Haiti raises serious questions about the performance of political leadership and the roles of key sectors in the Haitian polity—notably political parties and civil society—in what is ostensibly a democratic state. Haiti’s collapse also puts three-plus decades of international engagement into question, addressing a full range of political and economic development initiatives. So, where does this leave Haitian governance?

The emergence of a broad civil society platform—the Commission for the Search for a Haitian Solution to the Crisis—holds promise with a credible path forward. Its virtue lies in the national and sectoral scope of its representation and its sustained political engagement, which in August 2021, gave rise to what has become known as the Montana Accord. To its credit, the Montana Accord has generated a plausible transition formula out of the crisis and become more relevant by establishing ties with a political party coalition, the Protocole d’Entente Nationale (PEN)—a coalition of some 70 political organizations and social groups.

Emerging after Moise’s assassination, PEN has shown itself to be a somewhat disjointed group but one that represents a broad spectrum of Haiti’s political universe. For example, the PEN signatories linked with the Montana Accord include Joseph Lambert, the head of a rump (1/3) Senate still in office—bringing in another sometimes pretender to national leadership since last July’s tragic events. Considering there is also a dispute as to when Lambert’s term and that of his nine colleagues concludes, how this will play out is unclear.

The two-year transition governance timeline outlined by the Montana Accord probably places national elections in 2023, which is already risky, but all bets are off if they occur later. The proposed leadership structure envisions an interim president and prime minister overseeing a diminished version of the Haitian government. A larger transitional council, whose exact authority is not yet clear, will frame the potentially wobbly executive apparatus. Although Moïse had set in motion a controversial (and most likely unconstitutional) reform of the 1987 Constitution, the transition plan seems to have put that issue aside for now. In the interim, the 1987 Constitution, which does not envision anything like the Montana Accord, casts a shadow over the entire proposal.

Nonetheless, the political potency of the Montana group was on full display late in January when it went ahead with its selection of interim President Fritz Jean, a politically engaged economist and former head of the central bank, and Prime Minister Steven Benoît, a former Haitian parliamentarian who ran for president in the 2015 phase of the 2015-16 cycle of troubled elections. These announcements put in motion the first phase of the proposed transition. Now comes the hard part.

The Montana group has reached out to Henry for a transition dialogue. However, Henry has held fast to the illusory notion that he can remain in office past the disputed end of his mandate, reconstitute the provisional electoral council (CEP), generate a constitutional reform process, and hold elections later in 2022. He repeated these goals on February 7 in an address to the nation. In addition, he reached out to a wider audience (notably the diaspora) by laying out his case in a Miami Herald editorial. Henry is also relying in part on the existence of competing political platforms like the September 11 Accord, a combination of disparate political factions that favor the core of Henry’s transition plan, namely ratifying a new constitution and holding general elections by the end of this year, all under Henry’s stewardship. Other proposals for transition plans, like the Haiti Unity Summit Forum based in Louisiana, help Henry in a more nebulous way.

None of this confusion seems to match the sense of public urgency expressed by key international actors in the wake of a meeting hosted by Canada on January 21, where representatives of 19 countries called for Henry and his political opponents to reach a practical consensus for a way forward. The U.S. government has repeated this call for consensus, but Haiti’s political impasse continues. One might think that this situation would invite the U.S. and other international actors to place their bets sooner rather than later on a path out of the crisis.

So far, Washington and others have withheld an endorsement of the Montana Accord, while privately encouraging all Haitian political factions to come to a national consensus. Considering the checkered record of the international community in tipping the political balance in a time of crisis in Haiti, this is not an unreasonable stance. However, time is running out, and Haitian leaders have interpreted the continued ambivalence as favoring Henry. Vague statements from international actors do not bode well. The political reality on the ground is much more dire for a variety of factors:

In the post-Duvalier era of political development, the aggregate behavior of political parties and civil society have shaped the qualitative character of Haiti’s continuing search for democratic governance. In turn, this has firmed up citizen perceptions of the relative value (if any) of political engagement. But this societal dynamic points to a possible paradox. There has been some positive change, but it has resulted in a three-tiered governance structure operating at different speeds.

The first is a public political sector, which consistently functions at a slow, dysfunctional speed.

The second is an activist non-governmental sector (civil society, political parties, and business), displaying over time—with a few rough patches—some institutional consolidation. This segment has partially covered national policy needs in the absence of government. The interaction of the first and second tiers of Haitian governance has meant that despite Haiti’s tortured development process, there have been intermittent successes by the non-governmental sector in defining the terms of reference for political leadership—currently exemplified by the Montana Accord. That said, Moïse’s troubled presidency had already given rise to several broad coalitions of civil society and political party actors trying to cobble together transitional frameworks (notably the Marriott Agreement and the Passerelle Committee). The formation of these coalitions was triggered by the massive street-driven demonstrations related to PetroCaribe, but none led to a satisfactory outcome.

There is also a third tier of Haiti’s governance structure to account for—an international donor sector bureaucratically structured to sustain mostly aspirational progress that rarely matches the situation on the ground.

In 2022, the resulting operational question for the U.S. and other key international actors is how to weigh the payoffs of engaging with this tiered governance structure. Staying on the sidelines while implicitly providing political cover to Henry is becoming increasingly costly. Arriving at conclusive resolutions to three critical political priorities will become even harder to achieve:

The absence of progress on these issues delays and complicates the deployment of initiatives to address two overlapping foundational crises, which consequently undermine the odds of progressing on the first three issues:

The Haitian people will be at the mercy of more unintended consequences unless purposeful corrective action is taken to address these pressing trends.

The opening paragraph of this essay implies one possible scenario for the future: namely, that Haiti turns into a full-fledged failed state, with the evaporation of governing structures and the formal emergence of competing centers of authority. This is the picture most often painted—with understandable alarm—by the intermittent observers of Haiti because it is a vision that resonates among the wider public familiar with Haitian engagement since the 1990s. Moreover, such a scenario resonates within U.S. policy circles, namely in Washington and several U.S. state capitals, as it recalls images of a heightened humanitarian crisis with refugee flows. Fears of this scenario have resulted in a familiar pattern over the past three decades, with the U.S. playing a critical role in a large-scale military and longer-term multinational economic and political development presence on the ground. However, is this really in the cards?

A second scenario can be described as a bumpy ride of events reflecting political authority seesawing between key Haitian constituencies—including an uncontrolled universe of gangs, drug traffickers, and miscellaneous opportunists. There is considerable ambiguity built into this scenario from which diverse pathways may emerge. In the short run, a compromise between Henry and the Montana group is possible, although the real challenge will come in its “day after” execution and durability—in which the U.S. can be a decisive factor. This scenario also has a real possibility of transitioning into the first catastrophic scenario, but that outcome is avoidable.

A third alternative draws from the dire odds facing Haitians and the inability of its existing leaders and institutions to change this reality. Given the current environment, the rise of a leader who borrows from the autocrats’ playbook is not unlikely. For Haiti, this development would reverse the progress made over the past three decades to institutionalize modern, democratic governance.

Before dismissing such a scenario, it is worth noting the unsettling dynamic of Haitian heads of state since the 1990s. This includes two ineffectual back-to-back populist-style presidents (Michel Martelly and Jovenel Moïse), who were ultimately unprepared for the rigors of national governance. Each provided weak tenures ending in electoral chaos and turmoil. Two short-circuited Jean-Bertrand Aristide administrations were a closer scrape with populist authoritarianism, initially more grounded in the socio-political realities of Haiti but whose dubious political practices overwhelmed an aspirational democratic apparatus.

A recent study of Salvadoran President Navib Bukele—the self-styled “coolest president in the world”—draws out the profile of an emerging Millennial Authoritarian: a hip and youthful image, also circumventing traditional political party building; a fresh brand, accessible, and skillful use of social media; and a political storyline that appeals to moderate voters and appears to shun the exaggerations of political extremism. Bukele’s success has been in merging these three tactics, and in the process is dismantling the country’s already brittle democracy. Is this possible in Haiti? Such a notion should at least make everyone pause.

Georges A. Fauriol is a Fellow with Global Americans; he is also a co-chair of the Caribbean Policy Consortium (CPC), as well as a Think Tank Haiti (TTH) Steering Group member, a partnership of Université Quisqueya (Haiti) and the Inter-American Dialogue, and a senior associate at the Center for Strategic & International Studies (CSIS).