In Haiti, Canada Can Be Relied on to Support Oligarchic Gangsterism 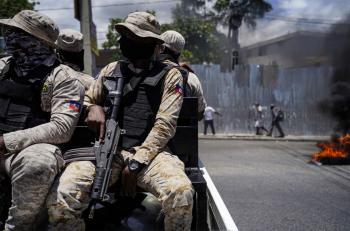 For decades, Canada has been a consistent bulwark against the success of popular forces in Haiti. As Haiti’s capital is engulfed in protests and violence, Canadian calls for international intervention to “help” sound ominous, not reassuring.

In the early twentieth century, Rosa Luxemburg popularized the saying “Socialism or barbarism,” which leftists of various stripes have adopted or modified ever since. The current struggle in Haiti pits the forces both sides of this dichotomy in stark terms: on one side are those seeking reforms in line with the policies of former Haitian president Jean-Bertrand Aristide — attempts to climb from misery to “poverty with dignity” — and on the other side are those seeking oligarchic gangsterism. For the last several decades, Canada, unfortunately, has been firmly on the latter side.

In recent months, gang warfare and violence have engulfed Port-au-Prince and other parts of Haiti. Many Haitians in already difficult circumstances have been further victimized by kidnappings and gang battles. The dire situation requires immediate action. In light of Canadian activity in the region, the recent flurry of Canadian calls for international intervention to “help” sound ominous, not reassuring.

The Canadian-backed head of the Organization of American States (OAS), Luis Almagro, recently called for the return of United Nations soldiers to Haiti, and Canada’s permanent representative to the OAS, Hugh Adsett, told the body, “Canada is ready, willing and able to accompany Haitians on this path to emerge from the crisis.” Adsett added, “We call on the OAS to engage in constructive efforts and thus act as a force to draw in actors to help them.”

Earlier in the month, Canada’s ambassador to Haiti, Sébastien Carrière, tweeted about being “heartbroken” at two young women’s brutal murder on the outskirts of Port-au-Prince. He decried “politics ‘as usual’” and “called on all political, social and economic actors to unite in a consensual transition plan and thus put an end to the political crisis. Now.” Carrière also hosted a webinar titled “Haiti, Emerging from the Crisis: What Support from Canada.” A major theme of the discussion was the Responsibility to Protect doctrine, which was widely cited to justify NATO’s 2011 bombing of Libya and, to a lesser extent, the 2004 US-France-Canada invasion of Haiti.

Carrière may be heartbroken by the death of the two young women, and Canadian officials may be genuinely concerned with the power gangs have amassed, but Ottawa is backing Ariel Henry, the politician who has overseen Haiti’s descent. More generally, Canada has spent decades empowering violent, corrupt Haitian political actors while undercutting the popular forces seeking to “move from misery to poverty with dignity,” as Jean-Bertrand Aristide famously put it in the country’s first-ever free election in 1990.

Threatened by popular forces fighting for sovereignty, Ottawa has repeatedly chosen to back agents of oligarchic gangsterism. In 2019, Haiti was the site of the most sustained popular uprising among the many that swept the globe that year. Sparked by a fuel price increase imposed by the International Monetary Fund, the country’s urban areas were paralyzed by a handful of general strikes between July 2018 and late 2019.

The longest strike against the corrupt and repressive president Jovenel Moïse largely shuttered Port-au-Prince for a month in the fall of 2019. With the overwhelming majority of Haitians wanting him out, the only reason Moïse withstood the protests was because of US and Canadian support. Canadian officials repeatedly criticized the protesters and defended Moïse while maintaining policing support and other assistance.

Threatened by popular forces fighting for sovereignty, Ottawa has repeatedly chosen to back agents of oligarchic gangsterism.

A year later, a new wave of protests gripped the country when Moïse extended his term beyond February 7, 2021. Again, Washington and Ottawa sided with the unconstitutional and unpopular president rather than popular forces. Six months after the protests of early 2021, Moïse was killed by elements within his corrupt Tèt Kale Party.

After Moïse’s assassination, a dispute erupted between the interim prime minister, speaker of the Senate, and recently appointed (though not sworn in) prime minister, Ariel Henry, over who should head the government. Through a tweet, the Core Group (representatives of United States, Canada, France, Brazil, Spain, Germany, European Union, United Nations, and OAS) advocated for the Haitian power structure to immediately fall into line behind Henry. Henry had little popular appeal or constitutional legitimacy, and in the hours before and after Moïse’s assassination, Henry had multiple phone calls with the prime suspect in the president’s killing.

Henry was a member of the Council of the Wise that appointed the prime minister after the United States, France, and Canada ousted elected president Jean-Bertrand Aristide on February 29, 2004. After a multiyear campaign to destabilize his government, US Marines forced Aristide onto a plane in the middle of the night and deposed him 8,000 km away, in the Central African Republic. When Aristide was forced out, American Forces Press Service reported that “a team of JTF2 [Canadian Joint Task Force 2] commandos . . . secured the International airport.”

Thirteen months earlier, the Canadian government had brought top US, French, and OAS officials together for a private two-day gathering to discuss Haiti’s future. No Haitian officials were invited to the Ottawa Initiative on Haiti conference in which the ouster of elected president and the placing of the country under UN trusteeship was reportedly discussed.

In May, the New York Times gave a historical account of the 2004 coup. The French ambassador at the time, Thierry Burkard, admitted Aristide’s call for the reparations for Haiti’s $21-plus billion debt of independence partly explained why he was ousted in 2004. Burkard told the Times that the elected president’s removal was a “coup” that was “probably a bit about” Aristide’s campaign for France to repay Haiti. In the recently released Truth to the Powerless documentary, then defense minister David Pratt said, “Canada, the US, and France did what was necessary in terms of removing him from power.”

Pratt claimed that Aristide, Haiti’s most popular politician ever, was ousted because he’d become a “big man” — a leader responsible for “abuses of power.” However, Canada’s allies in overthrowing Aristide and thousands of other elected officials were mercenaries with odious histories and oligarchs keen on overseeing a profoundly inegalitarian and racist regime.

A Canadian ally in the coup was sweatshop owner Andre Apaid Jr, whose father was “close to dictator ‘Baby Doc’ Duvalier” and “one of the chief lobbyists in the US” during the 1991–94 military coup against Aristide. Jean-Claude “Baby Doc” Duvalier was the oppressive president of Haiti from 1971 until being overthrown by a popular uprising in 1986. In 2004, Apaid led the US and Canada–funded Group of 184 — the self-described “civil society” opposition to the elected government. Apaid, a lead contractor for Canadian apparel maker Gildan Activewear, angry at Aristide for doubling the minimum wage, reportedly financed the paramilitary forces that were led by convicted drug smuggler Guy Philippe and known death-squad leader Louis-Jodel Chamblain. It was the attacks organized by Philippe and Chamblain that created the pretext for US, French, and Canadian forces to oust Aristide. (Days after Philippe told a local radio station, in 2007, that Apaid funded his forces, the US Drug Enforcement Agency raided Philippe’s home in Les Cayes).

No Haitian officials were invited to the Ottawa Initiative on Haiti conference.

Amid the rebels’ postcoup campaign of terror, foreign-installed prime minister Gérard Latortue openly embraced a force largely made up of soldiers from Haiti’s brutal army — the same army that Aristide had disbanded in 1995. In Gonaives, on March 19, 2004, Latortue hailed them as “freedom fighters.” Canadian diplomat David Lee, the head of the OAS special mission to Haiti, standing next to Latortue when he made this statement, nodded his head in approval. Lee claimed, “We’re trying to encourage reconciliation.” Many of those who attacked the elected government would be integrated into the police force, which Canada financed and trained.

To get a sense of Ottawa’s hostility toward a popular politician “seeking poverty with dignity,” one need only look to Canada’s response to Haiti’s horrific earthquake of January 12, 2010. Rather than send Heavy Urban Search and Rescue teams, Ottawa elected to send troops. According to internal documents examined by the Canadian Press, a year after a disaster that left hundreds of thousands dead, officials in Ottawa feared a post-earthquake power vacuum could lead to Aristide’s return. As one briefing note marked “secret” explained, “Political fragility has increased the risks of a popular uprising, and has fed the rumor that ex-president Jean-Bertrand Aristide, currently in exile in South Africa, wants to organize a return to power.”

Months after the devastating 2010 earthquake, the United States and Canada pushed Haiti to hold presidential elections. Then president Rene Préval, who won an election that Latortue’s government sought to rig against him, was not viewed by the United States and Canada as sufficiently compliant. With Port-au-Prince in rubble and hundreds of thousands living in camps, Canadian Foreign Affairs minister Lawrence Cannon demanded that Préval hold elections by the end of the year.

Canada and the United States continued to push elections — which excluded Aristide’s Fanmi Lavalas party — even after a deadly cholera outbreak (caused by the UN occupation forces recklessly dumping feces into a stream Haitians drank from). As a result of various obstacles tied to the earthquake and October 2010 cholera outbreak, hundreds of thousands were unable to vote during the poll on November 28, 2010.

Following the first round of presidential voting, Canadian and US officials forced the candidate whom Haiti’s electoral council had in second place, Jude Celestin, out of the runoff. According to the official results, Mirlande Manigat received 31 percent of the vote, Celestin 22 percent, and Michel Martelly 21 percent. US and Canadian officials, with no statistical rationale, removed votes from Celestin, who was allied with Préval, until Martelly was in second place. Canada’s foreign affairs minister threatened to cut off aid and US Secretary of State Hillary Clinton traveled to Haiti to press the matter. Emails released through the Freedom of Information Act show that officials at the US embassy worked with wealthy Haitians to support Martelly.

Protests were timed to mark the beginning of the 1791 revolt that delivered a massive blow to slavery, colonialism, and white supremacy.

As president, Martelly surrounded himself with former Duvalierists and death-squad leaders who had been arrested for rape, murder, kidnapping, and drug trafficking. When Jean-Claude Duvalier returned to Haiti after twenty-five years, Martelly made the absurd claim to the New York Times that no one wanted him prosecuted except for “certain institutions and governments” abroad.

In 2015, after repeatedly postponing elections, Martelly, the former member of the dreaded Tonton Macoutes, held a poll marred by fraud. Martelly’s handpicked successor, Jovenel Moïse, who he plucked from obscurity, took over from interim president Jocelerme Privert after a contested election redo in which Ottawa and Washington interceded on Moïse and Martelly’s behalf. According to a New York Times investigation, the two men had a profound falling out. Martelly’s brother-in-law is a leading suspect in Moïse’s murder. Since the president was killed, the situation in the country has deteriorated.

Major political, legal, and economic changes are required in Haiti. After the United States, Canada has been the biggest impediment to the success of popular forces in recent years. Fortunately, the solution to Haiti’s multiple crises was on display last week in the form of massive popular unrest. Despite repression that caused three deaths, tens of thousands marched in multiple cities to demand Henry step down. Protesters also criticized growing insecurity and soaring prices.

The protests were timed to mark the beginning of the 1791 revolt that delivered a massive blow to slavery, colonialism, and white supremacy. From the grips of the most barbaric form of plantation economy, the largely African-born slaves of Saint-Domingue launched a thirteen-year struggle that led to an independent nation with racial equality decades before this idea found traction in Europe or North America. The citizens of Haiti have fought against the forces of barbarism before, and they can do it again. If they do, Canadian interference will be in their crosshairs.