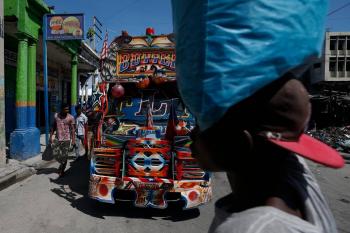 People in Port-au-Prince go about their day during a break in anti-government protests, which disrupted daily life in October 2019. Haitians are now frustrated with reports of a kidnapping wave as police “recognize the phenomenon.” Rebecca Blackwell AP

Haiti police are acknowledging that there is a “spectacular” rise in kidnappings in the country.

The new crime wave, which is being amplified by unconfirmed reports on social media of abductions of schoolchildren, churchgoers and the poor, is creating panic among Haitians that is now spreading to the diaspora where some are contemplating whether or not to travel to Carnival.

“[I don’t know] what to think,” Marsha Marie Piard tweeted in response to a question by the popular Haitian-American social media platform, Lunionsuite, which asked Twitter followers, ‘What are your thoughts on Haiti Kanaval 2020 given the political climate of the country? “I canceled my trip last minute based on advice from my friends living there. I’m confused.”

Piard, an editor at Business Wire, later told the Miami Herald in an interview that she had planned months ago to visit Haiti for pre-carnival festivities, “but got an earful from friends and family against doing so. It just isn’t the right time to visit.”

Earlier this week, the spokesman of the Haiti National Police responded to criticism that police were minimizing the new kidnapping wave and dismissing reports as rumors.

“The police recognize the phenomenon; it recognizes the dimension it is taking day-by-day,” police spokesman Michel-Ange Louis-Jeune said in an interview Tuesday with Port-au-Prince-based radio station Magik 9. “Everyone sees it, everyone has heard about it.”

Louis-Jeune’s acknowledgment of the disturbing phenomenon came in the face of outrage by the population, which said the kidnappings have turned them into virtual prisoners amid numerous reports that people are being abducted while doing routine things.

On Wednesday, frustrations came to a boil as some Haitians launched a new social media campaign, asking their countrymen to Bat Tenèb, or “Beat back the darkness” — meaning to make noise to bring attention to the abductions. A group of university students in Port-au-Prince also staged a protest on the Champs de Mars, the public square in front of the presidential palace, to demand police do more to deal with the epidemic of kidnappings.

People shop in a street market during a break in anti-government protests that disrupted businesses and daily life in Port-au-Prince, Haiti, in October 2019. Rebecca Blackwell AP

During the protest, some of the wooden spectator stands that were installed for the upcoming three-day pre-Lenten Carnival celebration, which kicks off on Feb. 23 after being canceled last year due to ongoing unrest, were destroyed.

The extent of the kidnapping spike remains unclear.

Louis-Jeune who last month confirmed 15 kidnapping-for-ransom cases, did not say how many new cases police were aware of or were working. He said for a variety of reasons police aren’t always contacted. He, however, accused some of giving false information to alarm the population.

In recent weeks, social media has been filled with stories — some verifiable, others not.

There was a report on Tuesday, for example, about a busload of schoolchildren who were snatched. When contacted, Louis-Jeune’s deputy police spokesman said they still had no confirmation on the incident.

Then there was a local news report last month involving the attempted kidnapping of Croix-des-Bouquets Mayor Rony Colin’s young children at school. Colin, who also owns Radio Zenith, said his children got away by jumping out of the back of the kidnappers’ vehicle.

Other stories involve lesser-known individuals and ordinary citizens, like a Petionville resident who was kidnapped for a second time last month, but this time failed to make it out alive. Neighbors assume he was killed because he fought back.

In most of the stories, the modus operandi is similar. The kidnappers all start off asking for high ransom sums and eventually settle for lesser amounts after bargaining. But even the smaller amounts are difficult to get because Haitian banks are rationing the amount of U.S. dollars they make available to customers. In some instances, the kidnappers have demanded as much as $100,000 if not more.

The feeling, said Patricia Camilien, a grassroots activist and political science professor, is that the phenomenon is widespread and indiscriminate.

People in Port-au-Prince go about their day during a break in anti-government protests, which disrupted daily life in October 2019. Haitians are now frustrated with reports of a kidnapping wave as police “recognize the phenomenon.” Rebecca Blackwell AP

“This makes us feel powerless, like there’s nothing we can do to stop it and that we are on borrowed time,” said Camilien, who heads the grassroots social movement for civic engagement and government accountability, ‘’Ayiti Nou Vle A’’ (“The Haiti We Want”). “Since the big kidnapping wave of 2004, I’ve had friends, family members and students kidnapped. Each wave brings back dreaded memories.”

Camilien’s group has launched a crowd-sourcing initiative to get more information on kidnapping cases. In a statement to the Herald, the group noted that despite police dismissing the wave in previous interviews as rumors, supporters personally know of individuals who were kidnapped since the beginning of this year.

“We needed help providing information on what was quickly becoming a phenomenon, a way to group all the ‘rumors’ beyond the Whatsapp groups and individual news stories and measure its scale,” the organization said. “Our aim is to create a database on incidents of kidnapping that could serve as a source of information for the police in their investigative work and that can show the impact of this practice on the lives of Haitians.”

Dr. Floreine-Jemima Joseph, 29, a primary care physician who lives in Petionville said “law enforcement is so absent that even criminals with low means are kidnapping their neighbors for ransom.”

“Everyone is at risk,” she said. “Even when you visibly do not have any money. Everyone is panicking now.”

In addition to Wednesday’s protests, other anti-kidnapping marches have been announced and are being planned. An anti-corruption grassroots organization has called for a march in Port-au-Prince on Sunday while the Brooklyn, NY-based diaspora group, Mouvement Patriotique Des Haitiens et Haitiennes conscients et conscientes( MPHC), said it is also in the process of planning one.

“The Haitian government is unable to protect its citizens,” said Dr. Yves Jean.

In a press conference on Tuesday, Haiti’s minister of justice and public security Jean Roudy Aly told Haitians, “Do not panic.” Police, he said, are responding to the situation and the kidnappers “might as well change profession.”

“There is no doubt about it, we will find them and the police are mobilized,” said Aly, who made a similar promise in late November as the phenomenon took root.