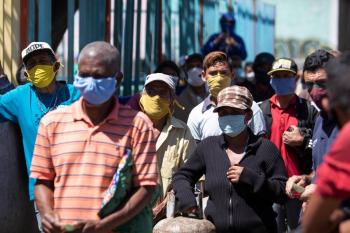 Update: Dr. Jerry Bitar was freed by his kidnappers late Friday in Port-au-Prince.

Haiti and Venezuela are among 51 countries the United Nations is seeking to help through a $2 billion global humanitarian plan launched this week to respond to the coronavirus.

Globally, there were 566,269 confirmed cases of COVID-19, the disease caused by the flu-like virus, as of Friday, and 26,455 deaths. In Latin America and the Caribbean, where the numbers are growing, there were 81,141 cases and 1,176 deaths as of Friday, according to the Pan American Health Organization.

Even wealthy countries such as the United States, with strong health systems, are buckling under the pressure, and the U.N. says it is increasingly concerned about the virus’ devastating impact as it reaches countries already grappling with humanitarian crises caused by conflicts, natural disasters and climate change. Populations in these nations, already vulnerable, also have to deal with weak public health systems.

“The COVID-19 pandemic has rapidly covered the globe. It has spread suffering, disrupted billions of lives and endangered the global economy,” U.N. Secretary-General António Guterres said in a call with reporters on Wednesday as the U.N. launched its $2 billion global humanitarian response plan to fund the fight against COVID-19 in the world’s poorest countries.

In addition to Haiti and Venezuela, other countries included in the plan — which spans South America, Africa, the Middle East and Asia — include Syria, Sudan, Central African Republic and Afghanistan.

Noting the various travel restrictions, quarantines and other measures being enacted around the world to try to curtail the spread of COVID-19, Guterres said, “individual country responses are not going to be enough.”

With only a small number of confirmed cases being reported so far in many conflict-ridden, poor countries, Guterres said the U.N. expects the numbers to rise.

“These are places where people who have been forced to flee their homes because of bombs, violence or floods are living under plastic sheets in fields, or crammed into refugee camps or informal settlements,” he said. “They do not have homes in which to socially distance or self-isolate. They lack clean water and soap with which to do that most basic act of self-protection against the virus — washing their hands.”

In the case of Haiti and Venezuela, the ability to prevent the spread of the highly contagious coronavirus and respond to the pandemic is constrained by impoverished health systems and governance problems.

“A COVID-19 outbreak would cripple an already weak health system,” the U.N. said of Haiti, which spends just $13 per capita on healthcare compared to the neighboring Dominican Republic, which spends $180; Cuba at $781 and the Latin American and Caribbean region at $336, according to a 2017 World Bank study.

With hospitals already lacking in equipment and the ability to provide care, last year’s violent protests spurred by the country’s ongoing social-economic crisis forced many hospitals to reduce activities due to shortages of medical supplies, oxygen and fuel and they have not regained full functionality, the U.N. said in its 80-page plan.

“Insecurity has aggravated the situation, making access to health services even more difficult and causing supply problems,” the plan said.

This reality was evident Friday as doctors, nurses and other medical staff at Bernard Mevs Hospital in Port-au-Prince — one of the few hospitals with an Intensive Care Unit and the capacity to take care of COVID-19 patients — closed the facility’s doors and protested after learning that one of their founders and physicians, Dr. Jerry Bitar, had been kidnapped near his home in Petionville that morning.

“The police are very concerned by this situation and have deployed personnel to work on this case,” Haiti National Police Spokesman Michel-Ange Louis Jeune said Friday afternoon.

Bitar’s kidnapping marked the second time in days that a physician fell victim to the country’s problem with crime. On Tuesday, a doctor with Zanmi Lasante/Partners In Health in Haiti was shot in the Croix-des-Bouquets suburb on her way home. The physician was later rushed into surgery at the University of Mirebalais Hospital, which is currently also caring for some of Haiti’s COVID-19 patients.

Last week, Haitian President Jovenel Moïse suspended all incoming international fights into the country and closed schools and factories. He also ordered Haitians to stay at home. The U.N. said it fears that such restrictions on movement, which countries are increasingly employing in the fight against COVID-19, could lead to “another lockdown of the country and a resulting standstill of economic activities.”

A decade after France and the U.S. promised to build Haiti a new hospital following the 2010 earthquake, the General Hospital remains mired in problems and concerns about sustainability. BY JOSE A. IGLESIAS

“This would have severe humanitarian consequences across all sectors, similar to events of September-October 2019 with disrupted access to food, education, healthcare and protection services; an increase in violence and destruction of livelihoods,” the U.N. said.

On Friday, Moïse finally named a 14-member “scientific committee” of doctors and sociologists to help address the pandemic. That same day, the International Monetary Fund said in a release the government had requested assistance from a special zero interest for five-and-a-half years fund to help “protect the Haitian people and the economy.” The IMF, which has put all financial assistance to Haiti on hold because the country first lacked a current budget, and then a legal government, said its team is working on the request.

If approved, the emergency funding would go toward “policies that would direct funds swiftly to Haiti’s most affected sectors, including the healthcare system, to bolster the initial response to COVID-19,” it said.

Compared to Haiti, which has eight confirmed COVID-19 cases, Venezuela has confirmed 91 infections. The oil-rich South American nation is currently under a lockdown after leader Nicolás Maduro declared a state of emergency on March 13. Four days later, he formally asked the U.N. for help with the response and socio-economic consequences of COVID-19 in the country.

U.N. officials note that laboratory kits have arrived in the country, and Venezuela does have the capacity to test. But while the ministry of health has designated 47 hospitals for response and treatment, and developed a national prevention and response plan, the overall capacity of the public healthcare system to respond to the pandemic is limited.

“This is due to a combination of factors, including shortages of medicines and supplies, the lack of regular water and electricity and the migration of healthcare professionals,” the U.N. said in the response plan.

Venezuela is also staggering under U.S. sanctions that are hurting its ability to sell oil — the nation’s economic lifeline.

Like in the case of Haiti, the U.N. fears the quarantine will exacerbate already existing social and economic tensions.

“The national social quarantine, including the closure of fuel stations in some areas, has already increased the price of basic commodities,” the U.N. said. “Supply distribution systems of food and other basic goods are under strain and depend on the Government’s ability to import basic goods amid internal and external economic limitations.”

The plan also includes as a target for assistance the 4.1 million Venezuela refugees and migrants being hosted by Latin America and Caribbean nations, which Colombia’s ambassador to the U.S. recently described as a “brewing pot for big trouble.”

“If something really critical is going to happen with this virus, it’s going to come from Venezuela. People are malnourished, really badly fed, no health system,” said Ambassador Francisco Santos.

Also included in the plan is a $405 million appeal from UNICEF for its emergency response in countries, as well as funding for a public education campaign on how to stay safe; scaled up air service to compensate for the reduced commercial flights in many countries; ramp up surveillance and lab testing to quickly identify and isolate patients, and for protective equipment like masks.

“For our courageous health workers, they need protective equipment,” UNICEF’s Executive Director Henrietta Fore said during the Wednesday call to promote the launch. “So for instance, masks [are] very important for frontline healthcare workers. In a normal year, we will order about 25,000. We now have a worldwide demand of about 55 million. So, part of it will be getting the private sector to help us to manufacture enough masks and enough gowns and goggles and other things that will keep our healthcare workers safe.”