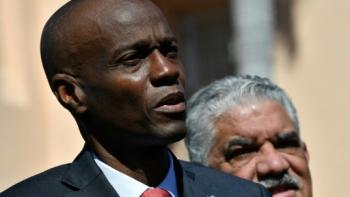 A panel of judges on Friday accused Haitian President Jovenel Moise of being at the center of an "embezzlement scheme" that siphoned off Venezuelan aid money meant for fixing roads.

The accusation was the latest linked to Venezuela's Petrocaribe aid program, which has been plagued by claims of corruption since its 2008 establishment.

In a report running more than 600 pages, the High Court of Auditors said that in 2014 the Haitian government gave two companies, which had the same payroll and staff, contracts to upgrade a road.

One of the businesses was Agritrans, a banana farming concern headed by Moise until his election in 2017, which received more than 33 million gourdes ($700,000) to fix the road.

Calling it "nothing more than an embezzlement scheme," the court said the two companies "made the same commitments separately on the same dates."

They also found that Moise's company received a cash advance nearly two months before the contract's signing, which the judges said amounted to "collusion, favoritism and embezzlement."

"The state of this stretch of road raises questions and shows that there is a huge gap between the amounts spent and the reality of the work that would have been done," the judges wrote after visiting the site.

In the same report, the court said a 2015 decision to award another road construction contract to Agritrans violated public procurement laws.

Set up under the government of former Venezuelan President Hugo Chavez, Petrocaribe allowed several Caribbean and Latin American countries to buy oil at cut-rate prices and on easy credit terms.

Investigations by the Haitian Senate in 2016 and 2017 concluded that nearly $2 billion from the program was misused.

Three-fifths of Haiti's population of nearly 11 million live below the poverty line of $2 a day.

Since the summer of 2018, a civic movement has mobilized to demand an accounting of the use of funds from the program.