The Haitian Struggle Against Empire with Dahoud Andre (Video interview) 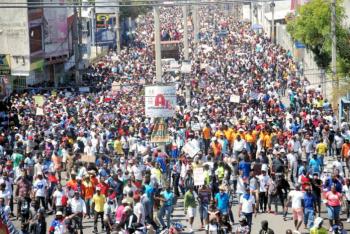 After being the only slave colony to gain its independence through a successful slave revolt Haiti has paid a price for that freedom. Financially and figuratively.

A mountain of debt owed to France coupled with generations of puppet leadership that does the bidding of the U.S. The Clintons and Obama have taken advantage of the island nation, Haiti is a bipartisan project. Donald Trump referring to Haiti as a "shithole" nation was just saying the quiet part out loud.

Guest Daoud Andre Haitian activist will discuss the current political situation in Haiti in which the president is demanding removal by the population who argue his constitutional mandate has ended. We'll discuss the U.S. and the West's role in the matter as well.

Massachusetts Peace Action also recently had a conversation with Dahoud Andre. The interview is available here.