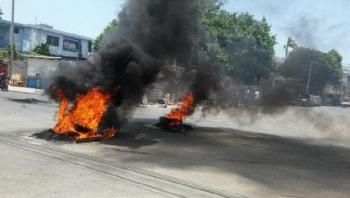 The Center for Human Rights Research and Analysis has counted 157 kidnappings in this Caribbean country during the first quarter of the year.

New protests against violence and insecurity in Haiti took place Tuesday in Port-au-Prince and surrounding regions.

Students at the State University's Faculty of Medicine set up barricades and burned tires to demand the release of professor Marie Josette Malvoisin, who was kidnapped as she was leaving the institution on Saturday.

Another group of citizens blocked the access roads to the international airport and threatened to block the streets leading to President Jovenel Moise's headquarters.

In the Petit Goave community, people blocked National Route 2 to denounce the kidnapping of local official Wilkens Dicette on Sunday.

During the past week, local outlets reported at least 13 kidnappings. Among the most recent criminal acts was the disappearance of nursing student Marline Flora Nerestant whose body was found by police in Tabarre on Monday.

On April 11, seven religious and three lay people were kidnapped in Croix des Bouquets, a suburb near Port-au-Prince. Two weeks later, three of the victims are still in captivity. In rejection of this incident, the Episcopal Conference promoted the closure of churches during the April 21 work stoppage.

The Center for Human Rights Research and Analysis has counted 157 kidnappings in this Caribbean country during the first quarter of the year.