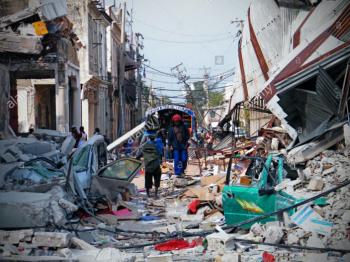 Collapsed buildings in downtown Port-au-Prince after the Jan. 12, 2010 earthquake. The Haitian government inflated the death toll to 316,000 six months later.

However, the Haitian government appears to have vastly overstated the death toll of the quake, finally setting it at 316,000 six months after the quake.

“Based on the data, we estimated, with a 99% probability, that the earthquake death toll was 46,190 to 84,961,” Schwartz explained in the chapter entitled “Disaster Inflation and Death Count” in his 2017 book, The Great Haiti Humanitarian Aid Swindle.

Fearing the political fallout of his team’s findings, USAID buried Schwartz’s report and blacklisted him.

In his book, Schwartz also cites the work of professor Richard Garfield of Columbia University’s School of Public Health, one of the world’s leading experts in estimating disaster mortality rates. “The government of Haiti had no methodology at all,” Garfield told the Toronto Star. “They just put numbers on a page.”

Working with the Karolinska Institute of Stockholm, Sweden, Garfield estimated 60,000 to 80,000 dead. The data was never published because Garfield feared it “would become a political matter instead of a humanitarian one.”

Rather than rejoice that about five times fewer people died in the quake, the U.S. government and foreign aid hierarchy, along with allied media, vilified Schwartz, calling him “an anthropologist who is vehemently opposed to foreign aid” and “a critic of aid in Haiti.”

The firestorm against Dr. Schwartz really began on May 30, 2011, when he published a blog post explaining the history of Haiti’s death toll. With light editing, we republish that post here. For a more in-depth treatment of his research and the blow-back, read The Great Haiti Humanitarian Aid Swindle.

This is a response to a report that I wrote for USAID regarding the Haiti earthquake death toll. I don’t know if I am even free to discuss the report, because it’s not official yet. However, what I can do is discuss the validity of the Haiti earthquake death toll count and whether or not a low death toll estimate should come as a surprise. The answer is “no,” it should not be a surprise, not to anyone in Haiti.  Here’s a review of how the government arrived at the death toll and summary of data I compiled from elsewhere and that bears on the death toll.

On Jan. 16, the very next day, the government tripled the number, issuing an official declaration of 140,000 dead.

On Jan. 23, after Belgian disaster response expert Claude de Ville de Goyet noted that “round numbers are a sure sign that nobody knows,” the government almost immediately offered a precise figure of 111,481 dead.

IT SEEMS PRETTY CLEAR THAT NO ONE, NOT THE GOVERNMENT NOR ANYONE ELSE, HAD ANY IDEA HOW MANY PEOPLE WERE KILLED.

Three days later, Wed. Feb. 3, the Communications Ministry raised the official death toll to 230,000, and then President René Préval added another 40,000 to the count, saying that the government had buried 270,000 bodies.

When Michelle Faul of the AP called and inquired regarding how the government was arriving at its figures, the press secretary withdrew the statement, saying there was an error. Within minutes it was re-issued.

The next day, under pressure to explain, the ministry again said that it was a typo, the number should have read 170,000. But in the same conversation the Minister concluded that, “For the moment, we count 230,000 deaths” — 60,000 more than she had said the day before. But even that was not definitive, “It’s a partial figure.”

When Michelle Faul tried to figure out how they arrived at the new figures, she was told that the government National Equipment Center (CNE) was counting. CNE officials referred questions to the prime minister’s office. The prime minister’s office referred questions to the Prime Minister’s Secretary-General. The Prime Minister’s Secretary-General could not be reached. Someone along the way said that it was not the CNE that was counting, it was CP (Civil Protection). CP director Alta Jean-Baptiste referred questions to Interior Minister Antoine Bien-Aimé who assured Faul that, “CP is doing a precise count and the numbers they give out are numbers that are proven.”  When Faul asked how they arrived at the numbers, he couldn’t say.

Assad Volcy, a spokesman for the National Palace, tried to clear matters up. “Experts” he said, had devised a formula to calculate how many quake victims have been buried. When asked what that formula was, Volcy said he didn’t know.

The only news agency to ever question the death count issue again [up until this May 2011 blog post – HL] was Netherlands Radio Worldwide, whose journalists carefully checked all the Haitian government sources, visiting cemeteries and burial grounds. They concluded on Feb. 23 that, even if 30,000 people were still under the rubble and another 10,000 disposed of privately or burned, there were still no more than 92,000 people killed and probably less. They pointed to gross inconsistencies, such as that the central government reporting 20,000 to 30,000 deaths in Léogane, while local Léogane authorities claimed to have buried 3,364 (two weeks after the earthquake, they had told me 1,600). The Haitian government also claimed 4,000 dead in Jacmel, while local Jacmel authorities reported 300 to 400 dead (ACTED, a French NGO whose workers were involved in burying the dead, reported 145).

[Six months after the quake, the Haitian government gave the final official death toll as 316,000 – HL.]

It seems pretty clear that no one, not the government nor anyone else, had any idea how many people were killed. But the interesting thing is that, while I am not impugning any motivations, almost everyone who had anything to do with any type of official agency or NGO seemed deliberately bent on skewing the numbers as high as they possibly could. And they did so with total disregard for the evidence.

THE HAITIAN GOVERNMENT, WHICH TO THIS DAY ISSUES VARYING CLAIMS OF 17% TO 30% OF ALL CIVIL SERVANTS KILLED, NEVER HAS PROVIDED PRECISE LISTS, NOT TO ANYONE.

The Haitian Government, which to this day issues varying claims of 17% to 30% of all civil servants killed, never has provided precise lists, not to anyone. The only thing we know for sure was that the Parliament and the police were hit very hard. In the days after the earthquake, then Police Chief Mario Andrésol had said: “We lost 70 police officers, nearly 500 are still missing, and 400 were wounded.”  When all was said and done, we know that 77 policemen were killed (that’s 0.73% of the 10,544 police in Haiti), and if we figure that a standard 80% were in Port-au-Prince when the quake hit, then it’s about 0.9% of those in Port-au-Prince were killed. We also know that two of 100 senators were killed and no deputies or ministers.

After the second or third week, journalists were no longer asking aid agencies about how many staff they had lost, and the agencies were deferring to the Haitian government for their figures. The United Nations, which had early on declared that it would come up with an official estimate, subsequently declined to conduct its own count. The Red Cross was mum. No other NGO ever questioned the figures again. On the contrary, as with the UN and the embassies, they invariably latched on to and restated the government figures.

In June 2010, the home page for Oxfam, which lost one of its 100 employees in Port-au-Prince at the time of the earthquake, was citing the government figure of 230,000; CRS lost none of its 100 employees in Port-au-Prince but was citing the same figures; World Vision lost none of its 95 staff in Port-au-Prince but implied there were more, saying “at least 230,000 dead;” Doctors Without Borders (MSF) lost seven of its staff of 800 but said the earthquake, “killed hundreds of thousands of people.” The Red Cross was the same; they lost no-one.  God’s Littlest Angels, featured on CBC, ABC, CNN, and Larry King, the same; they lost no one either.  Most NGOs lost no one. Businesses were the same: Triology lost 5 of 576 (0.9%); Digicel, two of 900 (0.02%); CEMEX, 0 of 115; PétionVille Golf and Tennis Club, 0 of 100, not a single employee even lost a home.

Intellectually, I really don’t care how many people were killed in the earthquake. The draft report for USAID was simply a job I was performing with a team of some 20 University educated professionals, including two other PhDs. But personally, for me, in terms of the tragedy, less is better. And at about 60,000 dead, that’s still a huge tragedy.