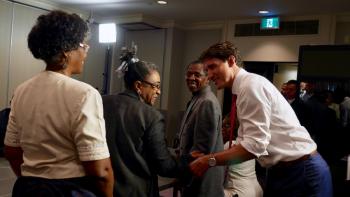 In recent months, an unprecedented number of asylum seekers have entered the province of Quebec. These immigrants, the majority of whom are of Haitian origin, cross the U.S.-Canada border without documentation and subsequently approach a border patrol agent to declare asylum, a legal request for protection by the Canadian government. This recent influx is in part due to the U.S. government’s decision to end the Temporary Protected Status (TPS) granted to Haitian asylum seekers in the United States following the earthquake in 2010. According to Canadian law enforcement, roughly 7,000 peoplehave entered the country this way since June 1.

The recent influx of asylum seekers has sparked xenophobic rhetoric in Quebec and across the country—far-right groups organized protests in Montreal and Quebec City in August, which were met by counter-protests in solidarity with refugees. Many right-wing political parties have also engaged in dehumanizing rhetoric which describes asylum seekers as burdens to the Canadian government and people. In reality, Canada has both the capacity and the ethical imperative to welcome them, many of whom have risked death to escape unstable conditions. The Canadian government should also make reparations for their role in bringing down the democratically elected Aristide government in the 2000s, as well as for the increase in deportations after the lifting of the deportation ban in 2016, which has resulted in the deportation of more than 5,000 Haitian refugees in the first half of 2017 alone.

In the majority of cases, asylum seekers are not made aware of the reality of the Canadian immigration process, and are instead led to believe that Canada is a welcoming haven for immigrants. This misconception is exacerbated by Justin Trudeau’s public image and lip service to refugees. By opportunistically posing with refugees and echoing empty ideas about the importance of diversity, Trudeau maintains a position of liberal superiority without actually pushing legislation that facilitates immigration into Canada. The proposed immigration policies outlined on the Liberal party’s website state that the government intends to open its borders only to 25,000 refugees from Iraq and Syria—less than 0.5 per cent of the more than 5 million refugees who have left Syria alone. Policy proposals reuniting families favour refugees who receive financial sponsorship from family members already partially immigrated to Canada. Family or spouse sponsorships bear the brunt of the socioeconomic cost of settling in a new country. Immigration Canada uses a point based system largely based on economic merit, rather than acknowledging an ethical duty that Canada has to open its borders.

For many Haitian asylum seekers leaving the U.S. at this time, entrance into Canada can in fact prove to be even more detrimental to their circumstances, given that the Canadian government is deporting Haitian refugees back to Haiti, as opposed to the U.S., where they still have status until January 22, 2018. Canadians must become aware of the way their country treats asylum seekers. They need to speak out and advocate for more ethical and compassionate immigration laws, and hold politicians accountable to their claims. Most importantly, they need to actively support asylum seekers by showing up to rallies, donating money and clothing where appropriate, and creating safe spaces for undocumented people. Last spring, for example, Concordia undergraduate students voted to make the university an official sanctuary campus, formally adopting a policy of non-cooperation. This includes, but is not limited to, refusing to share “any information on its current and past staff, faculty and students, or allowing the Canadian Border Services Agency (CBSA) on its premises, in order to protect undocumented community members from threat of deportation.” More must be done to put this into practice, as Concordia’s security personnel still collaborate with the CBSA, but the vote was a good start. It’s time for SSMU to do the same by pressuring McGill into adopting a similar policy.

When Pierre left Cap-Haïtien for South America, he never imagined he'd wind up in the woods of upstate New York.

But nine years and 10 countries later, he stepped into Canada and was arrested by the RCMP.

He had survived a two-and-a-half-month, 15,000-kilometre odyssey from Brazil to Roxham Road with his wife and seven-year-old son, through some of the most dangerous territory in the Americas.

By plane, by boat, by bus, taxi or on foot, the destination was always the same: "Anywhere but Haiti."

Pierre is not his real name. CBC News has agreed to protect the identities of the 30-year-old Haitian and his family to prevent any potential impact on their asylum claim in Canada.

Building a life in Chavez's Venezuela

A self-described socialist, Pierre left Haiti in 2008 to study in Venezuela. He made a new life for himself in Hugo Chavez's Venezuela, where he worked as a warehouse manager.

When the revolutionary president died in 2013, Pierre went south to Manaus in the Brazilian state of Amazonas.

But work dried up, so in 2016 he decided to head north to "conquer the American dream."

It's a path countless others have taken —  a backwoods channel for waves of undocumented Latin Americans, Africans, South Asians, Haitians and Cubans seeking a better future.

It's also a route fraught with exhaustion, fear, robbery, rape and death.

Desperate journey through the Darien Gap

With his wife and child, Pierre set out on June 16, 2016, crossing into Venezuela from Brazil.

"It wasn't easy to get into Colombia, but with a lot of tenacity we managed," he said.

From there the family boarded a bus to the Colombian port town of Turbo, where the South American stretch of the Pan-American Highway ends.

There they joined a group of 100 or so other migrants - Cubans, Africans and other Haitians ready to make the same desperate journey.

"From Turbo, we took a little boat," Pierre recalls. "Many people died because some boats sank.  But we arrived at the entrance to the Darien Gap."

The Darien Gap is a lush rainforest on the border of Colombia and Panama, thus named because it's a break in the Pan-American highway.

Migrants must travel through the untamed wilderness on foot.

"Crossing the Darien Gap was a very cruel experience," says Pierre.  "I spent six days in the mountains with no food and no water."

"So as not to get dehydrated, my family and I had to drink our own urine."

The migrants also had to avoid snakes and other wild animals lurking in the dense forest.

"Many people died," Pierre says. "But we had to go on because otherwise, we'd die too.  Whenever my son thinks about it, he cries."

After 15 days in Panama and a bus ride to Costa Rica, authorities stopped them at the Nicaraguan border.

"It was really tough to get across," says Pierre.

Stuck at the border and living in tents, Pierre paid smugglers nearly $3,000 US to get him and his family into Nicaragua.

Others were not so lucky.

"Some were ripped off and never did get across," he says. "There were many bandits who raped people when they were going through the forests."

Once in Nicaragua those that made it took a bus through Honduras and Guatemala to Mexico.

Pierre says Mexican authorities gave them passage on the condition they move on to the USA.

But arriving at the American border in Tijuana, Pierre was detainedand spent nine days in lockup.

Upon release, he moved his family to Florida.

Taste of the American dream

Pierre got a work permit while his U.S. asylum claim was processed, working as a check-in manager at the Orlando airport and at Disney World.

"I worked and waited for the [asylum] process to run its course," Pierre says. "But when Donald Trump came to power things got complicated."

He was worried that without permanent status, he and his family could be deported at any time.

Then Prime Minister Justin Trudeau tweeted his support for refugees during Trump's efforts to enact a travel ban from Muslim-majority countries, and Pierre turned his eyes northward.

"When [Trudeau] said, 'Canada's ready to welcome refugees,' I said, 'Well, if that's the case, I'll come to Canada,' because I'm looking for a better life."

So the family flew to Plattsburgh, N.Y., and boarded a bus to the border, crossing into Canada illegally at Roxham Road and making an asylum claim.

They spent 24 hours in a temporary camp near the border, then two weeks living in the shelter set up at Montreal's Olympic Stadium.

The family now has an apartment, and Pierre is trying to get a work permit while he awaits his Immigration and Refugee Board hearing.

Accusations, beatings and stabbings back home

In his asylum claim, Pierre says he can't go back to Haiti because his family is being targeted by a gang of street criminals.

He says the trouble started in 2009 when a woman in his neighbourhood accused his father of witchcraft and threatened to have a gang attack him with machetes.

Pierre says his father fled but the gang beat up his mother.  He has copies of statements to the local police to help prove his story and a picture of his mother after the beating.

He claims the same group of thugs attacked him for his political views in 2010 on a visit home, accusing him of trying to organize an uprising against the government.

Then just this year, Pierre says his brother was stabbed by the gang and had to move his family to another part of the country.

"It's a country with no justice," Pierre says.  "If I go back there they'll kill me."

'Such a cruel journey'

Sitting in a coffee shop near Jarry Park in Montreal's Villeray neighbourhood, Pierre sketches out a drawing of his long journey on the back of one the myriad documents and forms that make up his refugee case file.

The map fills the page.  His home country is conspicuously absent.

"We left the U.S. because we were scared they'd deport us to Haiti," he says.

"In Haiti most people are unemployed. It's miserable. There are kidnappings all the time."

Pierre hopes the Canadian government will give extra consideration to those like him who have come so far.