Hope for Haiti may lie in opening up its border 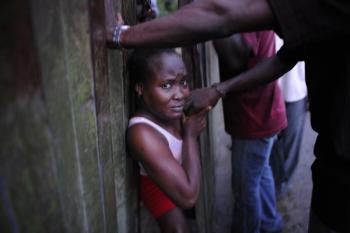 The border crossing between Haiti and the Domnican Republic at Dajabon show the startling contrast between the two countries’ economies.  (LUCAS OLENIUK / THE TORONTO STAR FILE PHOTO)

A recent report from the Center for Strategic and International Studies (CSIS) has shot me back nine years. Scattered images. A naked boy spinning cartwheels on the banks of a strangely named river. The rain moving in. A vast bridge. A gate slamming shut. A desperate woman attempting to wedge herself through that gate, as if she were cattle. A Dominican child slapping the face of a Haitian child, just because he could.

The fragments could be assembled then into an economic narrative. The Massacre River, which subsumed the corpses of Haitians slaughtered by the Dominican dictator Trujillo in 1937, is spanned by a bridge that connects Ouanaminthe in northeastern Haiti to Dajabon in the Dominican Republic. Nine years ago there was no more apt a vantage point from which to view the contrast of the scorched economy of Haiti against the relative flourishing of the DR.

An “economic chasm,” in the words of the CSIS report released this month, separates the two countries that share the island of Hispaniola. Until the mid-20th century, both had roughly the same GDP. The population of the two countries today is approximately the same, at close to 11 million. Yet the DR’s economy is 10 times the size of its neighbour. The average per-capita income in the DR is $7,000 (U.S.), still low by regional standards, but riches compared with the average Haitian income of $765.

The bridge across the Massacre River is open to Haitians just twice a week. The scene: a crush of Haitians pulsing past, “pulling empty carts, pushing wheelbarrows, or balancing plastic crates or basins on their heads.” I am quoting now from the CSIS report. The Haitians seek eggs or Brunswick sardines or shoes. Perhaps a bag of flour. Or pay a premium to be able to sell their own wares. For of course the market is on the Dominican side. And the gate slams shut.

There is no space to recount the tragedies of Haiti here. But the non-profit think tank has zeroed in on the border as a potential pivot point, a place through which customs revenues could be increased, corruption reined in, local development strengthened.

The borderlands evolved decades ago, from disputes between the two countries to a commingling of Haitians and Dominicans. “Some Haitians became elite members of Dominican communities as businesspeople, professionals, and property owners,” the report notes. Until, that is, Trujillo directed the slaughter of as many as 15,000 Haitians, “cleansing” the region. Dominican plantation owners were free to continue to transport Haitian sugarcane workers across the border.

Cross-border trade between the two countries in modern times can’t seriously be called “trade.” CSIS cites 2015 statistics, a year in which the DR exported $1 billion worth of goods to Haiti, while importing just $4 million worth. Two years later that chasm had shrunk, but only slightly.

The lower value of official exports from the DR can be attributed to the banning of 23 goods by the Haitian government. The list includes rebar, pasta, beer, cooking oil. Yet many of these goods continue to be sold at the Dajabon market. Just what the Haitian government is trying to accomplish with this measure is unclear. CSIS quotes a steel spokesperson saying that the ban has caused informal trade to explode.

Regardless, lost revenues to government coffers have been estimated to run in excess of $400 million annually at a time when foreign assistance has decreased dramatically and the country remains in desperate need of infrastructure improvements. The Inter-American Development Bank estimates that external donations to Haiti will contribute $400 million this year and annually through 2021 from a peak of $2 billion in the 12 months following the 2010 earthquake. Capital expenditures fell by half between 2012 and 2016.

Corruption is endemic in both countries. And both governments are embroiled in financial scandals. (The Odebrecht corruption scandal throughout Latin America includes $92 million in alleged bribes paid by the Brazilian construction giant to Dominican politicians. The ongoing PetroCaribe scandal in Haiti refers to the misappropriation and misuse of a near $2-billion fund that was to be directed toward major projects.)

Corruption in the borderlands is as one might expect. The two governments do not work in concert to reinforce legitimate trade. “Dishonesty is hard to resist when you are struggling to pay school fees and see colleagues building houses or buying cars,” says an unnamed economist in the CSIS report. Adds a Haitian industrialist: “We’re not talking about goods crossing the border via motorbikes. We’re talking about large trucks travelling with armed guards.”

Yet each needs the other. “Haiti needs Dominican products and know-how; the Dominican Republic needs Haitian workers and foreign market access. Facilitating formal trade would stimulate investment, creating jobs on both sides of the border. It would also increase the tax revenues needed as Haiti copes with declining foreign assistance.”

The report’s recommendations include opening binational markets on the Haitian side of the border, relaunching efforts to establish a joint border development plan, including a fund aimed directly at encouraging agricultural exports, creating joint facilities for customs officials and police officers to strengthen customs collection, implementing bilateral agreements on digital information sharing between the two customs agencies and expanding the Polifront border police. (Canada has been a primary partner in supporting the border police unit in clamping down on smuggling and reinforcing the rights of migrants.)

Neighbouring countries with histories as strife-torn as these two have been able to set aside their differences to promote trade along their common borders, the report’s authors point out. With international help, Haiti and the DR can work together “to combat corruption and to provide impoverished border communities with better jobs, infrastructure, and services.”