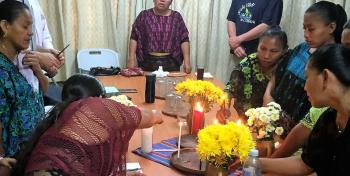 Some of the Lote 8 women/ rape-victims/ plaintiffs, in a ceremony and preparation session before their travels to Toronto, November 2017,
to be interrogated over three weeks by Hudbay’s lawyers at the Fasken Martineau law firm.

There are very depressing and yet affirming revelations in Hudbay Minerals corporate documents filed recently in the Ontario Superior Court of Justice.

We now know that Hudbay and CGN (Guatemalan Niquel Company, its former subsidiary in Guatemala) made unofficial and illegitimate payments of hundreds of thousands of dollars to contracted liasons with the Guatemalan police and military who gave said funds to the military and police for their role in planning and carrying out the violent and arguably illegal forced evictions of Mayan Q’eqchi’ villages in 2007, including those of January 9 and 17 in the village of Lote 8, and that these payments were done with no contracts, written agreements or invoices.

We now know that Hudbay/CGN corporate officers approved the decision to carry out an increasing number of Lote 8 over-flights in company helicopters, at ever lower levels, with the intention of frightening and psychologically intimidating the villagers, leading up to the two violent and arguably illegal evictions in January 2007; that they did this because they had learned from people in their employ that the U.S.-backed Guatemalan military regime threatened, attacked and terrorized Mayan villagers by helicopter during the worst years of Guatemala’s massacres and genocides in the 1980s; and that Hudbay/CGN corporate officers chose to use this tactic on the people of Lote 8 to try and scare them into leaving their lands.

August 9, 2018 public hearing
These are some of the revelations in motion materials filed in the Ontario Superior Court of Justice (file # CV-11-423-077, available at court registry office, 393 University Avenue, Toronto) by Klippensteins Barristers & Solicitors on behalf of their clients, the 11 Q’eqchi women victims of gang-rapes by Hudbay/CGN private security guards and Guatemalan military and police.  On August 9, at 10am, in a court-room at 393 University Ave, Toronto, there will be a public hearing to address Klippensteins’ motion to amend their statement of claim.

Rights Action hopes to have one of the 13 plaintiffs, from the Hudbay Minerals lawsuits, in court that day.

Depressing
These revelations are depressing.  They show that despite its public relations work and statements over many years Hudbay corporate officers were fully aware of many of the most serious underlying issues in Guatemala – endemic repression and violence, corruption and impunity - and that they chose to coordinate directly with the military, police and their own security guards to physically remove the original Q’eqchi’ inhabitants from their lands, knowing that there were serious risks of violence and repression and knowing that there were unaddressed underlying legal questions as to the validity of Hudbay/CGN’s claims to the lands in questions.

Affirming
These revelations are also affirming, confirming things that the local communities have known about, in general terms, for years; confirming what Guatemalan and international NGOs, including Rights Action, have known about, in general terms, and denounced for years.  Not incidentally, NGOs have documented and denounced similar things with respect to other U.S. and Canadian companies operating controversial, violent and possibly illegal mines in Guatemala, including Goldcorp Inc., Tahoe Resources, Radius Gold and Kappes, Cassaday Associates.

What More Will We Learn?
During the past 5 years of discovery and disclosure, Hudbay has been legally obliged to hand over to Klippensteins some 19,000 of otherwise private, confidential corporate documents including policy statements, company communications, texts, emails, etc.  What Klippensteins have included into the court record, for the August 9 motion to amend, is a small portion of the over-all documents.  As the Hudbay Minerals lawsuits proceed – ever so slowly forward – what more will be revealed in possible future court and trial filings of corporate documents?