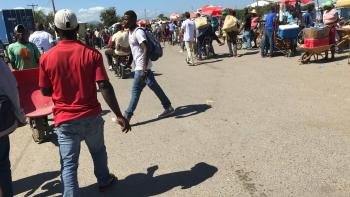 Haitians cross Haiti's northern border with the Dominican Republic between the cities of Ouanaminthe and Dajabón on market day. Jacqueline Charles

Goods brought illegally across the border between Haiti and the Dominican Republic cost the Haitian government about $400 million a year in uncollected revenues — money that could be used for sorely needed healthcare and other basic services at a time when the U.S., Venezuela and other foreign governments are cutting aid to Haiti.

And now, some U.S. lawmakers want the Trump administration to help Haiti crack down on the contraband.

Six members of Congress — including three from South Florida — have sent a letter to Acting Secretary of State John J. Sullivan and Department of Homeland Security Secretary Kirstjen Nielsen requesting U.S. assistance with Haiti's efforts to reduce the flow of illicit goods.

Among the assistance lawmakers say Haiti could use: training for security personnel and Dominican and Haitian customs officers, and technology such as drones, sensors and cameras to help Haiti collect customs duties and catch smugglers along its porous, 245-mile border on the island of Hispaniola.

"The lack of border control capacity, especially in Haiti, directly undermines the efforts of the United States and the international community to support economic development and rule of law in Haiti, and could potentially threaten U.S. security interests," the letter said. It notes that the State Department's 2016 International Narcotics Control Strategy report describes the Haitian land border as being, "uncontrolled and provides a low-risk environment for drug traffickers and other criminal enterprises."

Facing a trade imbalance with the Dominican Republic, double-digit inflation and a long-running budget deficit, Haiti’s struggling private sector has found itself at a huge disadvantage compared to a small minority in the country who have managed to build wealth from black market trade, and with their Dominican counterparts, who are leading one of the region's most vibrant economies.

Former Haitian Finance Minister Daniel Dorsainvil, who recently wrote a report on the impact of the illicit trade, said Dominican products such as flour, ketchup, sausages, rice, corn, steel are flowing into the country untaxed along with other products — Dominican poultry and eggs — that are banned outright.That creates unfair competition for Haiti and also has cost the country about 500,000 jobs in agriculture and another 60,000 in manufacturing.

Dorsainvil presented his findings earlier this year during a high-level discussion that included members of the Dominican private sector and State Department officials at the Center for Strategic and International Studies, a Washington think tank . A follow-up discussion was held in March in Port-au-Prince with Haitian lawmakers. On Friday, Haiti's Central Bank will also tackle the issue as part of a seminar on corruption that's expected to be attended by President Jovenel Moïse.

"A failed Haiti is a threat to the United States," said Georges Sassine, president of the Association of Haitian Industries, a grouping of Haiti's manufacturing companies. "President Jovenel Moïse did not create the problem. He inherited it. What we are trying to do is get the U.S. government to put its weight behind Mr. Moïse, to combat contraband."

Sen. Bob Corker, R-Tenn., the chairman of the Senate Foreign Relations Committee who isn' t a signatory on the congressional letter, also raised the contraband problem as part of Trump secretary of state nominee Michael Pompeo's confirmation hearing before his committee. "What more can the U.S. do to ... crack down on illicit contraband trade between Haiti and the Dominican Republic, and bring sorely needed revenues to the government of Haiti?" Corker asked in a question submitted to Pompeo.

Pompeo, who advanced on Tuesday to a full Senate floor vote, said if confirmed he would seek to complete an ongoing U.S. Agency for International Development $4 million customs support project aimed at enhancing Haiti’s revenue collection and contraband interdiction.

Pompeo also promised to continue the department's efforts to train and professionalize the Haiti National Police.

Of Haiti’s 13,779 police officers, only 118 are currently assigned to the border, as part of a pilot project launched last fall by the Haiti National Police. But analysts say the numbers, which are nowhere near the 6,000 Dominican military stationed across the border, aren't enough to prevent the crossing of between 1,000 and 1,500 people a day, much less the large volumes of goods being illegally transported in trucks across the border usually after closing.

Pedernales – a border town in crisis

Pedernales.- This municipality on the southwestern border is experiencing a serious economic crisis since the free zone recently laid off 607 people, which followed the closure of the Bi-national Market and the Ideal Dominicana, Cementos Andino, and Dovemco, a bauxite exporter, two years ago. These three companies used to employ 3,500 workers.

The dismissal of free zone workers has led to a range of reactions, including tire burning street protests and demonstrations outside the homes of Mayor Luis Manuel Matos Féliz, (Minguito) and free zone manager Oddy García.

The clothing company announced last week it was closing operations because there was no market for its products because its main trading partner was Haiti, but all commercial activitie ceased in the wake of the murder of farmer Julio Reyes Pérez and his wife Neida Urbáez, allegedly by three Haitians who fled the country. The Haitian police has detained one of the suspects.

The Bi-national Market was closed on March 12th, when local residents gave Haitians 24 hours to leave the province.

According to statistics, the market generated about three million pesos a day for traders and hawkers, while the sale of used clothing to the Haitian market turned over more than ten million pesos per day.

When the bauxite export company was open it indirectly provided work for 200 truckers who transported the mineral and earned up to sixty thousand pesos a day.

The only employer in Pedernales since the closure of the Free Zone is the town hall. “We are the presidential palace, we are the government now, and we can’t take any more, although we want to help everyone the council can’t,” said mayor Matos Féliz.

The mayor says that he is on the receiving end of a lot of pressure both from former free zone workers as well as the traders and other sectors in Pedernales.

This, concludes Matos Féliz, has put Pedernales in a very difficult situation.