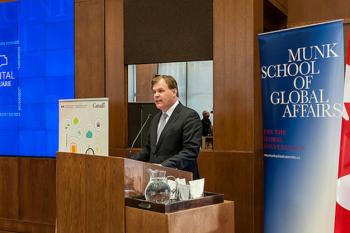 Whether former foreign affairs minister's appointment to the board of mining giant is payment for past political favours or not, it helps demonstrate corporate interests politicians serve while in office.

John Baird shocked the country this February when he abruptly announced that he was leaving his post as Minister of Foreign Affairs and member of parliament. Last week, a regulatory filing of Barrick Gold revealed that the mining giant had hired Baird to its international advisory board, headed by former prime minister Brian Mulroney, for an undisclosed amount of money.

In hindsight, it is easy to see how Baird's position as Minister of Foreign Affairs could have benefitted both Barrick and Barrick founder Peter Munk's pet project, the Munk School of Global Affairs at the University of Toronto.

Baird has admitted to consulting Ethics Commissioner Mary Dawson just one day before news of his departure from political office was known, suggesting he was manoeuvring to respect at least the letter of the law. The Conflict of Interest Act prohibits former cabinet ministers from taking a job with any firm with which they had “direct and significant” dealings within one-year of leaving office. This prohibition remains in place for two years after the minister's last day of work.

Luckily for Baird, his last meeting with Munk in Davos, Switzerland was almost one year to the day before his meeting with the ethics commissioner – a coincidence that calls into question how long Baird has been planning this move. Baird also met with former Barrick lobbyist in May 2013 to discuss "mining, international relations." On Monday, regulatory filings revealed Baird has been nominated for a position on the board of Canadian Pacific, another company with which he has had dealings in his former position as Minister of Transportation.

Regardless of technical legality, Baird's former department oversaw the transfer of millions of dollars of public monies to Barrick Gold and Munk's projects.

Under Baird's leadership, the Department of Foreign Affairs absorbed the Canadian International Development Agency (CIDA), a move to align CIDA's development work with Canada's commercial interests and foreign policy objectives. CIDA had earlier granted $500,000 towards a project partnering with Barrick and World Vision next to a Barrick mine in Peru. These kinds of partnerships were to be more common under CIDA's new management structure.

This January, Baird announced $9 million in federal funds for the Digital Public Square Project, a project headed by the Munk School of Global Affairs, to "increase digital space for free expression and open political dialogue in places where civil society and citizen participation are under threat." Previously, Baird's department had given $250,000 to the Munk School's Global Dialogue on the Future of Iran, a predecessor to the Digital Public Square Project, with that money going towards a conference of the same name. Interestingly, this project was criticized by many within the Iranian diaspora for deliberately leaving out Iranians "whose views on Iran do not fully concur with the positions of the Harper government," according to an open letter penned by Iranian Canadian Community Council and co-signed by seven other Iranian community groups.

Baird was a frequent supporter of the Munk School, and has made public appearances at events several times over the past few years. By comparison, it doesn't seem that Baird has made an appearance at the University of Ottawa since 2010.

Baird's foreign policies have been criticized for their selectiveness and partisanship. “While naming and shaming Iran, Baird downplayed similarly dismal [human rights] records in the Gulf States—Saudi Arabia, and Bahrain in particular,” says David Petrasek, associate professor at University of Ottawa's Graduate School of Public and International Affairs. While Baird's view may have been motivated by the Conservatives' political biases, they also favoured Barrick's objectives in the region, having recently announced a partnership with Saudi Arabia.

Whether Baird's appointment is payment for past political favours or motivated by a wealth of contacts with foreign diplomats and heads of state, his new role in the private sector should sound alarm bells.

The revolving door demonstrates whose interests politicians serve while they are in office, and their lack of concern for good timing proves that they are arrogant enough to think that there's no problem with that. Barrick's investors should also be concerned with how much of this politicking actually helps their investments, or just creates an extra layer of fat for Munk's political buddies.

Sakura Saunders is editor of protestbarrick.net and a member of the Mining Injustice Solidarity Network.

Foreign Affairs Minister John Baird's resignation is being greeted with the usual positive pap from the mainstream media.

Baird's penultimate statement today (February 3)—that people need to be defined by their values—was the type of sound bite that he mastered over 20 years in politics. His gift of the gab often camouflaged a foreign policy that was out of sync with many Canadians' values.

The negative fallout of the Conservatives' foreign policy has undermined Canada's reputation in many countries.

Let's start with the issue of government surveillance. I recall an interview Baird gave to Canadian Press in 2013 in which he urged whistle blower Edward Snowden to give up to U.S. authorities because it has a "free and fair justice system".

There was no mention of how often U.S. authorities execute prisoners. Baird was unconcerned that the Obama administration has used the Espionage Act twice as often as all U.S. administrations in the previous century.

Instead, Baird was quick to condemn Amnesty International for having the audacity to suggest that former U.S. president George W. Bush and former U.S. vice president Dick Cheney should be held accountable for alleged war crimes.

In the Middle East, Baird gleefully advanced Stephen Harper's agenda. For that, Baird was pelted with eggs last month by Palestinians in the West Bank who've been appalled by Canada's one-sided approach.

In a book called The Ugly Canadian, writer Yves Engler chronicled how the Harper government's foreign policy extended to supporting the export of cancer-causing chrysolite asbestos in countries like India. The Harperites opposed a private member's bill encouraging mining companies to meet basic human-rights standards, and supported coups against elected presidents in Paraguay and Honduras, which benefited Canadian companies.

The Conservatives with Baird as foreign minister unnecessarily shut down all diplomatic relations with Iran—making it difficult for Canadians of Iranian descent to visit relatives—even as Iran is becoming more important under its new president in containing Sunni extremism in the Middle East.

After Baird became foreign minister, a political hack like former B.C. premier Gordon Campbell was named to Canada's top diplomatic post in London. The appointment was symptomatic of the Harper government's contempt for the professional foreign service, which manifested itself in the dreadful treatment of whistle blower Richard Colvin and a dismissive view of the United Nations.

Meanwhile, as climate change became an increasingly important issue on the world stage, Baird remained fairly silent, toeing the Harper line. Baird also oversaw Canada's retreat from Africa and pivot toward Latin America, which was explained in a diplomatic cable released by WikiLeaks.

Baird was a Harper crony for a long time. He supported Harper's party leadership bid and oversaw the introduction of the Accountability Act. Government watchdog Duff Conacher chronicled how it fails miserably in achieving real accountability.

In 2007, Conacher told the Straight that Baird's legislation broke 22 of Harper's 52 pre-election promises in this area.

To be fair, Baird was vocally supportive of equal rights for the LGBT community, but that only reflected mainstream Canadian opinion on this issue.

And he stepped up with generous relief programs after natural disasters, like Typhoon Haiyan. It's worth noting, however, that this only occurred after the Conservatives had been hammered for their tepid early reaction to the 2010 earthquake in Haiti.

Today, expect to hear a great deal about these "achievements". This will come even from Opposition MPs, who don't want to appear too churlish when one of their Conservative colleagues in Parliament has created distance between himself and the prime minister.

But Canadians across the country shouldn't be sucked in by this. As foreign-affairs minister, Baird was a disaster. And I'm not too optimistic that the next Conservative foreign affairs minister will improve on that record.