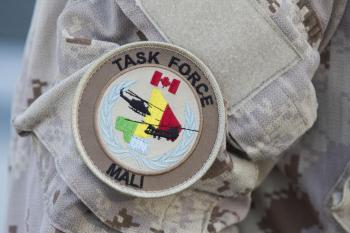 The UN Mali patch is shown on a Canadian forces member's uniform before boarding a plane at CFB Trenton on Thursday. The soldiers are heading to Mali for Operation Presence, the military operation to support the United Nations peace mission.  (LARS HAGBERG / THE CANADIAN PRESS)

The dispute between Donald Trump and Justin Trudeau over Canada’s financial contribution to NATO is a sideshow. The real story is that Canada is being drawn increasingly into America’s wars.

That is the import of Trudeau’s announcement last week on Iraq. Canada is already training Iraqi troops in the north of the country, as well as working in an unspecified manner with Kurdish militias there.

Wednesday’s announcement commits Ottawa to running a new NATO training mission in Baghdad. The job of about half of the 250 Canadians sent on this mission will be to provide force protection — that is trying to prevent other soldiers from being blown up in the streets by militants.

All in all, Trudeau’s Liberal government has authorized the deployment of up to 850 Canadian soldiers in Iraq to work in various training missions, as well as provide air transport and medical services to others in the U.S.-led coalition against Daesh terrorists.

Keep in mind that this is all taking place in the context of a conflict that Canada worked hard to avoid when the U.S. first invaded Iraq in 2003.

At the time, then Liberal prime minister Jean Chretien was lauded for keeping Canada out of a war that destroyed Iraq and led to the formation of armed terror groups like Daesh.

But now, quietly, we are being drawn back in.

Former Conservative prime minister Stephen Harper was roundly condemned when he first sent Canadian troops into Iraq four years ago. By contrast, Trudeau seems to be getting a pass.

Nor does the Liberal government face much opposition to its extraordinary military decision to place so-called peacekeepers in Mali.

Technically, this is a United Nations mission aimed at brokering peace between various armed factions. But the real aim of the Mali operation is counterterrorism. There is no peace to keep.

In this case, the French are the most visible leaders of the counterterror coalition. The Americans, by contrast, maintain a low profile and prefer to operate out of neighbouring Niger.

At least 250 Canadian soldiers will be sent to Mali where they are expected to provide logistical, medical and transportation support to forces operating on the ground.

The third war that Canada is being drawn into is the new Cold War against Russia. Trump himself may not think Russia a threat. But the U.S. military establishment certainly does — particularly after Russia’s 2014 annexation of Crimea.

The U.S. is using NATO, which now includes former Soviet satellites such as Romania and Bulgaria, to contain Russia along its western border. It is also providing training and arms to Ukrainian forces and has deployed troops to Poland.

Canada is gleefully taking part in this new Cold War. It has sent roughly 200 soldiers to Ukraine to train that country’s soldiers. It leads a battle group, including 540 Canadian soldiers, in Latvia. It has taken part in air exercises in Romania.

Under Trudeau’s father, Pierre, Canada drastically scaled back its NATO operations in Europe. Under Justin Trudeau it is ramping them right back up.

The current prime minister has dismissed Trump’s demands that Canada and other NATO members spend at least two per cent of their entire economic output on defence — and rightly so. For Canada, that sum amounts to roughly $44 billion — $5 billion more than the federal government spends on medicare each year.

But regardless of percentages, Canada continues to wholeheartedly support America’s military agenda — in the Middle East, Africa and Europe.

Trudeau says Canada is fulfilling its international obligations. In a way he’s right. By and large Canada is doing everything the U.S. wants. Surely that’s enough.