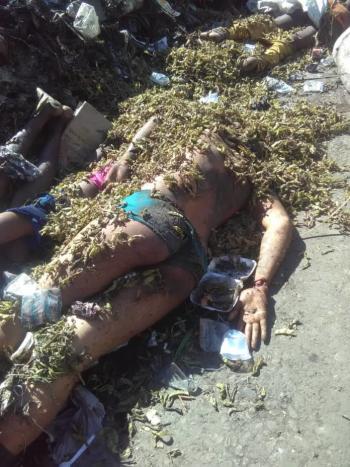 A victim of the November 2018 massacre in Lasalin. The bodies of massacre victims were left in the street to terrorize the local residents.

Lasalin, a shantytown in Haiti’s capital, is crossed by two main thoroughfares, which make it a strategic area, coveted by several economic and political groups.

On one side is Jean-Jacques Dessalines Boulevard, with Lasalin Boulevard on the other. Facing Lasalin are truck terminals and private ports that receive goods and merchandise from abroad. The shantytown’s center is situated directly across from the terminals and ports. One powerful ruling class group considers the people of Lasalin a threat. It is determined at all costs to force out Lasalin’s residents and take over the land to enlarge its economic operations.

Edouard Baussan, the owner of Unibank, now controls these terminals after buying out the other shareholders. For this group to achieve its dream, it must remove the people who live in Lasalin. Many Lasalin residents are active members of the Fanmi Lavalas Political Organization and publicly declare their appreciation and loyalty to former President Jean-Bertrand Aristide, who began as a parish priest in Lasalin in the 1980s and, after being elected president twice, implemented many development projects in the area.

Haiti’s ruling class does business with wealthy businessmen internationally, particularly from the U.S.. Both groups supported and helped bring the ruling PHTK (Haitian Tèt KaleParty) to power. This may explain why major international media provided very little coverage of recent massacres in Haiti, which I submit they were behind. There was a similar lack of coverage among the local Haitian media which they control. If it were not for social media networks – Facebook, Instagram, WhatsApp – the world might not know what occurred in Haiti on Nov. 13, 2018, when hundreds were killed, scores of houses were burned, young women were raped, and children and elderly were mutilated with machetes.

The Nov. 13, 2018 massacre is not the first to have taken place in Lasalin. In 1957, in order for General Antonio Thrasybule Kébreau to stage elections to install dictator François Duvalier as president, he massacred many of President Eustache Daniel Fignolé’s supporters, who lived in working class neighborhoods such as Lasalin and Belè. Those popular neighborhoods did not want to accept the coup d’état that the Haitian Army carried out against President Fignolé, sending him into exile.

On Sep. 11, 1988, paramilitary thugs allied with the neo-Duvalierist Haitian Army massacred parishioners during a mass officiated by Father Jean-Bertrand Aristide at St. Jean Bosco Church in Lasalin. They then burned the church down.

During the first coup d’état from September 1991 to September 1994 against President Aristide, the Haitian Army with paramilitary allies massacred many activists in working class neighborhoods, including Lasalin.

Similar massacres took place during the second coup d’état  against Aristide which began on Feb. 29, 2004. Lasalin was again targeted.

The struggle of Haiti’s masses – the descendants of enslaved Africans – throughout history to claim their rights goes back to the time of slavery. In the war for Haiti’s independence, several social classes in the French colony of Saint Domingue united their forces, but they still had different class interests.

Divergent class interests led to division after the victorious War for Independence. Each class fought to maintain and defend its interests.

Among these different classes, only the enslaved group spoke words such as “creating a nation,” “equitable distribution for all the people of the land,” and “live free and independent or die.” However, propertied classes saw it differently. People coming out of slavery were not considered human beings; they had no rights in the new nation. They were not part of the societal project.

The formerly enslaved throughout Haiti’s history have been fighting for their rights: to live with honor and dignity and the right to work; the right to healthcare; the right to food, education, justice, and good housing. “What about those whose fathers are in Africa?” asked founding father Jean-Jacques Dessalines. “Will there be nothing for them?” This question was one of the reasons Haiti’s new ruling class betrayed and killed Dessalines. “All for them, nothing for the masses of the people.” From this time on, this murderous ruling class has always come together to crush the majority population — the formerly enslaved, the marginalized.

The ruling elite, which not only controls the economy but also the local media, lobbies foreign governments and the international media to demonize the majority population’s struggle. Local and international lobbyists have concocted a variety of names throughout recent history: kamoken, chimè, bandi, dechoukè, rat pa kaka, kidnapè, ravèt… This is part and parcel of a psychological war to manipulate public opinion. When the police or their auxiliaries commit a politically-motivated massacre, uninformed people are fooled into thinking that the police are killing bandits and criminals.

No nation can develop if it is not politically independent; it will find it impossible to choose the leadership that the people want to govern. When other people are choosing, it is not in the population’s best interests. The enslaved and disadvantaged understood this. This is the motive force for the independence struggle being carried out today. To wage this struggle, one must mentally decolonize those classes wanting true liberation.

In these modern times, there is a different approach to slavery, but the results remain the same. This is why it is referred to as modern-day slavery. Working class neighborhoods like Lasalin, Site Soley, Solino, Raboto, Sentelen, and Jalouzi are considered by neo-colonialist countries as “warehouses for modern slaves.”

The big media and Washington-aligned “international community” are silent about massacres taking place in Haiti, particularly in working class neighborhoods that they consider to be slave warehouses. In fact, the entire country of Haiti is considered a slave warehouse, where a Haitian worker is expected to live on a minimum wage that is less than $5 a day.

Members of Haiti’s bourgeoisie invest a lot of money in the campaigns of candidates for deputy, senator, and president, favoring people involved in criminal acts and corruption. This allows them to participate in contraband, corruption, illegal weapons and drug trafficking, and kidnapping. By financing campaigns, the bourgeoisie can  also influence appointments in the state apparatus for ministers, directors-general, and electoral council members. They also receive duty-free status, paying no taxes on their imported merchandise that is later sold to the population at inflated prices.

Different sectors of the Haitian oligarchy have their own cliques within the Haitian National Police – for example, Jimmy “Barbecue” Cherizier and Gregory “Ti Greg” Antoine – that works with armed civilians such as Serge “Ti Junior” Alectis to eliminate adversaries. The Dec. 21, 2018 assassination of Alain Dougé, who was working on a new labor code for Haiti, stands as an example.

With the complicity of the police, government officials, senators, and deputies, using their private customs offices right across from Lasalin, these groups from the bourgeoisie can easily bring any type of weapons into Haiti. This explains how a poor person living in Lasalin or Granravin – who cannot even afford to eat and receives a wage as small as $3 for a full day’s work – can own a weapon that costs several thousand dollars, not to mention the cost of bullets.

To maintain their monopolistic control, these economic groups become very violent, stopping at nothing to defend their interests. These power cliques of the bourgeoisie are known to the Haitian people by names such as Groupe Bigio, Groupe de Bourdon, Groupe Acra, and Groupe Unibank.

Groups like these have at their disposal an armed militia which poses as a security service. They make alliances with a few outlaws in some of the working class neighborhoods, provide them with money and weapons, creating groundless rivalries that conveniently allow for the elimination of political adversaries. The assassination of Paul “Ti Koton” Ambroise allegedly by Gregory “Ti Greg” Antoine is a clear example. Ambroise was a potential candidate for Port-au-Prince mayor under the banner of Fanmi Lavalas; he was assassinated in plain view of the police after attending a soccer game at the Sylvio Cator stadium.

In conclusion, gang warfare does not exist and has never existed in Haitian society, especially in Lasalin, Granravin, and similar working class neighborhoods. What is called gang warfare is in fact class struggle.

In November 2018, 283 people were killed in Lasalin, according to community residents and various human rights observers. What gang would have the capacity to carry out such a massacre without the complicity of the government and the police? What gang would have enough money to buy all these weapons of war? The Lasalin massacre amounts to slaves killing other slaves.

What do Barbecue, Ti Junior, Ti Greg, Vlaw, Ti Je, and Arnel Belizaire represent in the struggle? Without a doubt they are the “weapons” placed in the midst of the enslaved that the bourgeoisie can use whenever needed.

If Lasalin, Vilaj de Dye, Matisan, or Granravin become a political obstacle, it follows naturally that the bourgeoisie will try to eliminate all of their political adversaries in order for the field to be wide open in advance of the next elections. Since the majority of residents in poor neighborhoods like Lasalin are Lavalas, it amounts to repression against Lavalas itself.

The Lasalin massacre was neither an accidental occurrence nor an inter-gang turf war. It was a political act, calculated and planned.

This is an abridged and edited version of an article originally written in Haitian Kreyòl for Haiti Solidarity in February 2019. It was translated into English by the Haiti Action Committee.