Montana Accord: The Transition Council already has about 40 out of 52 members. 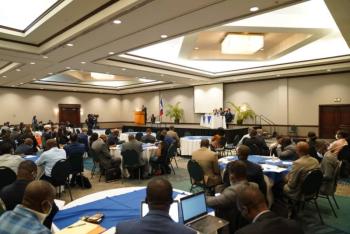 The list will soon be made public, Magalie Georges announced.

Out of fifty-two personalities to be part of the National Transitional Council (CNT), forty delegates have already confirmed their presence to initiate the process towards the establishment of a political transitional power. By Tuesday, the composition will be unveiled to the general public, despite the fact that some sectors still show some reluctance to confirm their delegate.

Representatives of the Civil Society Commission, initiators of the Montana Accord, this weekend met members of the Haitian community in Florida to promote the document. Soon, an official communication will be prepared on the tour of the United States of the signatories of the Agreement.

Regarding the formation of the CNT, the trade unionist informed the confirmation of James Beltis, Bénissoit Duclos, André Lafontant Joseph who were delegates by their organization, approving the Agreement.

Regarding the steps taken by the de facto Prime Minister, Doctor Ariel Henry, to form a new government team, Magalie Georges did not want to comment. The September 11 agreement (Musseau Accord) signed between the government and political organizations including the Democratic and Popular Sector (SDP), in accordance with the terms of the document, is progressing in its application.

For their part, the SDP leaders urge the head of government to complete the process. The appointment of a new director general at the head of the National Police of Haiti (PNH), Frantz Elbé is one of the points included in the text, recalled André Michel, spokesperson for the SDP.

With regard to the position of the American administration advocating the merger of the three texts (Montana Accord, Musseau and the National Memorandum of Understanding (PEN) for an inclusive consideration of actors, the spokesperson for the Commission said she was betting on the adoption of the document by the population before seeking international support.

More on the Montana Accords

Montana Accord: "the real deal to resolve the crisis", according to Danio Siriack

There is no constitutional solution to the crisis raging in the country after the death of President Jovenel Moïse ”, according to the analysis of more than one. There has to be a political agreement, say the players. Concluding a real agreement to resolve the crisis, everyone thinks they have the recipe.

There are several political agreement projects that have been circulating since February 7, 2021. Each sector or each political grouping thinks it is more legitimate than others to propose the agreement. Danio Siriack, spokesperson for the Organization Peuple en Lutte (OPL), believes that the citizen conference agreement for a Haitian solution to the crisis (CCSHC) is the people’s agreement. “It is a broad, inclusive, participatory agreement with the involvement of various sectors of national life. The private business sector, the voodoo sector, the peasant sector, trade unionists, women’s organizations, youth organizations, socio-community organizations, the provincial concertation table, the Catholic Church, the Protestant Church, among others, are involved in the signing of the Montana agreement, ”explained Siriack. “A set of political parties, groupings of parties, socio-political organizations have all initialed the agreement,” said the spokesperson for the OPL.

Danio Siriack, who recalls that the OPL is one of the first signatories of the Montana agreement, believes that there is nothing more inclusive than this agreement. “The agreement is intended to be inclusive to the point that even parties or groups of political parties considered to be opposed can have representatives on the National Transitional Council (CNT)”, he pointed out. The political strength of the agreement, he stresses, is its inclusiveness. “The agreement has the political force necessary to influence the smooth running of the country,” he concluded.

The N ap Mache pou Lavi structure believes in the urgent need for an Inclusive Working Group (ITC) for a final agreement. “N ap #Mache Pou Lavi (Marchons pour la vie) encourages the signatories of the National Memorandum of Understanding (PEN), those of the August 30 accord and the Senate resolution, non-signatories and the Prime Minister of fact, Mr. Ariel Henry, to come together to definitively endow the country with a political agreement ”, we read in a note made public on September 1, 2021.

“This agreement must prioritize the interests of the vast majority of the population, plagued by crime and poverty, and of those who have particularly sacrificed themselves for the cause of the rule of law during the previous years”, continues the note.

Duclot Bénissoit, member of the Collective of Haitian Unions for the Respect of the Constitution of 1987 (COSHARCO-1987), denounces a maneuver by certain members of N ap mache pou lavi to boycott the Montana agreement. “As a founding member of N ap mache pou lavi, Cosharco was not informed of this document. There was no such invitation or meeting. Moreover, many of the signatories of the document on the urgent need for an Inclusive Working Group (CTI) for a final agreement are not members of Nap mache pou lavi ”, revealed the trade unionist.

“Kou sa a pap pase”, hammered Mr. Bénissoit who believes that the population, through the signatories, takes ownership of the agreement.

Jean Junior R. Célestin studied social communication at the Faculty of Human Sciences of the State University of Haiti. He made his debut in the practice of journalism on Magik9 radio, the daily LeNouvelliste and TV 20. Jean Junior Célestin is passionate about law, political sociology and philosophy. A fiery journalist, he is currently Director of Information for Radio Zénith.