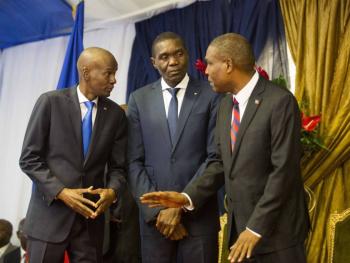 A protest is planned outside the Haitian consulate, near the intersection of Parc and des Pins Aves., in Montreal at midday on Saturday.

Protest organizers are calling on the president of Haiti, Jovenel Moïse, to “give in to the demands of the people of Haiti” who want him to resign following violent protests in the country.

Haitians in recent weeks have taken to the streets to protest price hikes on what are considered necessary products and against corruption, including the alleged poor management of the PetroCaribe fund. Under the fund’s agreement, Venezuela was to provide gasoline to Caribbean countries at a low interest rate.

However, according many Haitians, the money allegedly disappeared into the pockets of government representatives, who would have spent the money on luxury items.

The Comité d’action des personnes sans statut à Montréal, which is organizing the protest in Montreal, says it supports the popular movement in Haiti.

Frantz André, a spokesperson for the group in Montreal, said the price of such basic items as rice and flour has risen by 47 per cent in recent months.

“It’s practically impossible for these people to eat every day,” he told Presse Canadienne.

André also said he has a message for Canadian Prime Minister Justin Trudeau.

“We ask him to be a real defender of human rights and that he involve Canada in the search for long-term solutions to diminish the extreme poverty in this country (Haiti),” André said.

After the Haitian consulate, the protest organizers say their protest will join another planned for Phillips Square in downtown Montreal that will target what that protest’s organizers call “the American-Canadian coup d’état in Venezuela.”