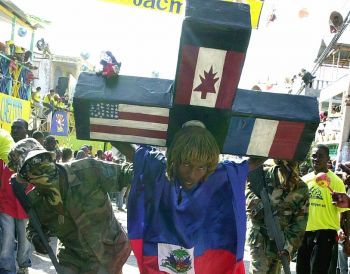 New-York based activists KOMOKODA spearhead an international chain of solidarity with the people of Haiti. Their call for a day of protests on Monday March 29, 2021 in multiple cities across the Americas and around the world was answered in Montreal and Ottawa, among other cities.

March 29th was chosen because it marks the anniversary of the Constitution of 1987 following the 29-year dictatorship of the Duvalier regime. See Levekanpe.org In Ottawa, activists opted to deliver a poignant message to the Haitian Embassy, where an illegally-named Ambassador represents the U.S. backed dictatorship led by Jovenel Moise.

In this brief video, you will get a quick primer on why Haitians reject the foreign-backed regimes established in their country since 2004. Author Jafrikayiti shares with us some rare footage of the 2004 bicentennial celebrations of Haiti's abolitionist revolution and a never before published encounter between former Canadian Minister of Foreign Affairs Pierre Pettigrew confronted by activist/author Yves Engler.