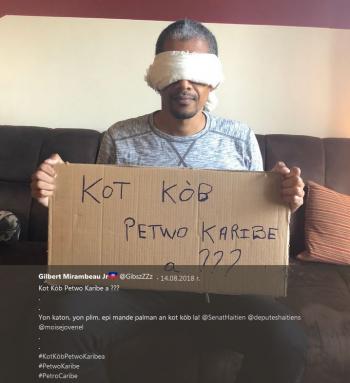 Gilbert Mirambeau, a Haitian videographer living in Montreal, Canada, launched the “PetroCaribe Challenge" on social media last year. On August 14 he tweeted a photo of himself blindfolded, holding a cardboard sign with a single question written in Creole: “Where is the Petrocaribe money?”

Petrocaribe is an aid programme Venezuela offers to several Caribbean states but whose funding is suspected of being misappropriated.

Mirambeau would surely never have suspected that his social media campaign would result in a wave of demonstrations that is now endangering the presidency of Jovenel Moïse.

A January report from Haiti's Superior Court of Auditors added fuel to the fire after it cited disastrous management practices and the suspected diversion of nearly $2 billion (€1.7 billion) from the Petrocaribe fund.

The anger over Petrocaribe has since burgeoned into a grassroots movement against widespread corruption in Haiti, which is ranked 161 out of 180 countries on Transparency International’s Corruption Perceptions Index.

'Where is the money?'

The Petrocaribe alliance allows some Caribbean states to purchase Venezuelan oil on preferential terms. "The savings from this agreement were supposed to fund sustainable social projects and strategic investments to help the poorest country in the Western Hemisphere with development," the movement says on its website.

But Haiti has never seen those promised benefits.

Throughout last summer, young Haitians mobilised on social media using the #PetroCaribeChallenge hashtag, planning several demonstrations and sit-ins in Port-au-Prince, the country's capital, to demand an audit. The first rally took place on August 24 at Haiti’s Superior Court of Auditors and Administrative Disputes.

Some local media praised their efforts.

“It is high time for a new stratum of civil society to wake up and move from the virtual to the real,” said an editorial in Haiti’s Le Nouvelliste. “It is high time that it demanded ... that light be shed on the use of the PetroCaribe fund.”

Little by little, the Haitian diaspora also mobilised in cities around the world. From New York to Montreal and from Miami to Paris, the exiles also began asking: "Where is the money?"

About 15 former ministers and senior officials have so far been implicated, among them the president himself. Investigators noted that the Agritrans company, at the time headed by Moïse, had been paid to reconstruct a road. But a contract for the project cannot be found.

"Corruption means the administration is filled by senators, lawmakers who use their positions to nominate their friends, their families, people without experience or expertise," said Pascale Solages, 31, a PetroCaribeChallenge activist, in comments to AFP.

"This is the first time we have seen such civic awareness ... This is a huge scandal involving billions spent in a country that suffers from glaring social inequalities," Laennec Hurbon, a professor of sociology at Port-au-Prince State University and researcher at France's National Scientific Research Centre (Centre national de la recherche scientifique), told Radio France Internationale.

The January audit was incomplete and falls far short of lifting the veil on the entire Petrocaribe case. A second report is expected in April.

But in a country where 60 percent of the population lives on less than $2 a day and where inflation has exceeded 15 percent for the last two years, the new audit is unlikely to do much to assuage public anger.

Moïse finally broke his silence with a speech on Thursday after seven days of silence on the unrest roiling his country. But his words also mostly failed to calm the popular anger that continues to crystallise around him.

This article was translated from the original in French.