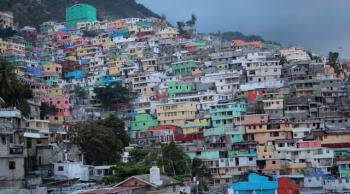 Jalouzi, a poor neighborhood on the hillside above Petionville, gets a makeover.Jalouzi is one of the largest heavily concentrated poor neighborhoods, or shantytowns, in Haiti. Due to its location on a steep hillside high above the capital of Port-au-Prince, Jalouzi is a dangerous place to live. It also endangers the surrounding areas because of the environmental consequences of replacing soil-retaining trees with concrete houses.

It is not a surprise that more houses have been built in Jalouzi in the last three years to accommodate a growing population of homeless or internally displaced people since the earthquake on January 12, 2010 (an estimated 1.5 million were rendered homeless that day). The Haitian Government and humanitarian non-governmental organizations (NGOs) have supported a program that has encouraged the growth of shantytowns and created more danger.

The Haitian Government’s 16/6 program to remove displaced people and supposedly put them into new housing has been a total failure. The displaced families who were given a small stipend to rent a new home had no choice but to return to the same unsafe housing situations they were in before the earthquake, and many are now living in even more dangerous conditions.

Within a few months of the earthquake, many NGOs began complaining that they couldn’t find land to build housing for internally displaced families. This was in large part because the Haitian Government said it could not make land available. From the administration of President Preval to President Martelly, we’ve heard the same discourse about the government not having land available to build housing for homeless families who are still living in camps today.

The government’s refusal to assist in securing land opened the door for NGOs to begin distributing small stipends to people to leave camps. Since then we've seen a policy that is the complete opposite of what should be happening.  Whereas the Haitian Government should have been a model for the NGOs, instead the NGOs became the model for the Haitian Government. They began the program of giving a small amount of money to empty the camps – a short-term solution to a long-term problem – instead of creating a real solution for the homeless. All along they have defended themselves by saying: “We cannot find land to build houses for people.”

Areas like Jalouzi, the Bourdon ravine, Canaan (Kanaran) and Corail have become the main recipients of all kinds of people, from those who have been illegally, forcibly and often violently evicted, to those who have received a small stipend that is only enough to rent one room in a house in these kinds of neighborhoods.

Over the last few days, Jalouzi has started to show a new face but it is purely cosmetic, as opposed to an influx of funds that could bring real change for the residents. Many houses in the area are being painted in bright colors, showing a state of permanence for the poor there, where tens of thousands live in danger day and night. The majority of the houses in Jalouzi have bases that are smaller than the higher floors, and the state of sanitation in the neighborhood is truly deplorable in this era when cholera is so destructive.

The change brought to Jalouzi by painting the walls of the houses today shows that there is no plan for displaced people. Jalouzi and other poor neighborhoods on the steep hillsides are an eye sore for the Oasis, the Best Western, the Hotel Kinam that is enlarging its capacity, and the Karibe Convention Center. The Haitian Government would rather show another face as part of a larger propoganda campaign to prepare Haiti for business and tourism.

The Haiti Government and the NGOs are both failing to do the thing that is the heart of their mission and their greatest responsibility: to help the most marginalized and poorest Haitians. Their efforts to move people out of camps – out of sight out of mind – only exacerbate the housing crisis, and they are shameless about their failure to help those who need it most. They make excuses and shift the blame from one to the other instead of doing what really needs to be done. The US Government has been a silent and complicit partner and donor to these inhumane machinations to pay people to go quietly out of the spotlight, and to essentially be swept under the rug.

Bri Kouri Nouvèl Gaye translates as 'Noise Travels, News Spreads.' It is a Kreyol-language popular newspaper that provides access to information for Haiti’s most vulnerable and marginalized populations, from the inner cities to tent camps and rural areas.  In addition, BKNG’s articles validate the experiences of Haiti’s poor by making them the focus of many articles, exposés, and editorial pieces.