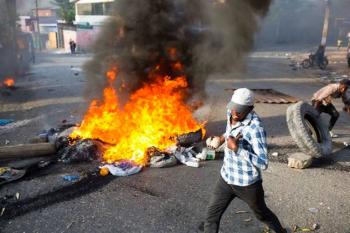 A general strike broke out in Haiti Friday, provoked by austerity measures, in which protesters are demanding the resignation of Haiti’s president, Jovenel Moise. The police have responded to demonstrations with live ammunition.

Anthropologist Tim Schwartz, author of the 2017 book "The Great Haiti Humanitarian Aid Swindle," joined Radio Sputnik's Loud & Clear to discuss the demonstrations, which have effectively shut down the capital of Port-au-Prince as well as many other parts of the Caribbean country.

According to the Haiti Information Project, at least six demonstrators were killed by police on Monday and several others have been killed since the strike began. The protests commenced hours before a government measure went into effect that would increase the price of fuel by 50 percent, a plan backed by the International Monetary Fund.

The Haitian government responded by canceling the recent fuel price hike. The US Embassy in Haiti and government of Canada have warned their citizens in the country to shelter in place amid the protests.

"This is a population that's already at the breaking point, and when you raise the prices you do a lot more than just make things difficult; you increase thievery, you increase frustration on the streets," Schwartz told Loud & Clear hosts John Kiriakou and Brian Becker. "It raises the tensions level [and] insecurity."

But that was just one catalyst of the civil unrest, Schwartz said. "There the frustration… people were disappointed with the earthquake relief effort. It's gone now; the money's gone. The United Nations is gone, which took away a lot of money, a major source of income," Schwartz said.

The disaster drew hundreds of millions of dollars from sympathizers outside the country. However, some $500 million given to the Red Cross disappeared. The company claimed to have built 130,000 homes with the money, but an investigative report found that they had built just six. As of 2017, some 55,000 people were still living in tents and makeshift camps, according to UN Humanitarian Coordinator Mourad Wahba.

Despite the resentments of the populace boiling over, "one of the amazing things you see with these kinds of riots — collective frustration, explosions — is that very few people actually got killed. The violence was directed at property, it was directed at the wealthy, and it was sort of fascinating how accurately they attacked specific hotels that were associated with families that people consider part of the… economic repression and monopolization of the economy," Schwartz said.

"They're not collectively attacking and hurting people," Schwartz said. "What you have is the only means of expression for an extremely repressed population."