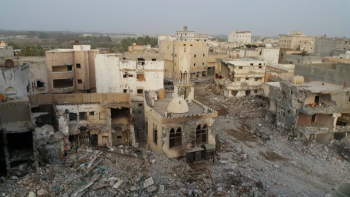 The town of Al-Awamiya in the eastern Qatif province of Saudi Arabia resembles scenes from a war zone.

Over the summer, videos came out that appeared to show Saudi Arabia deploying Canadian combat vehicles against their own citizens. And it barely made a splash in the Canadian media.

When [Canadians] found out the Trudeau Government was selling armoured vehicles to Saudi Arabia, despite their terrible human rights record, there was little public debate. When a professor launched a bid to stop the deal, the Federal Court rejected it, saying there was no proof that the vehicles were being used against Saudi citizens.

Then this summer, videos surfaced that appeared to show that Ontario-made combat vehicles were in fact being deployed against Saudi civilians. That news barely made a splash.

The Globe and Mail’s Steven Chase has been following this story closely – and is one of few reporters who have been covering it at all. You can read all of his reporting at the Globe and Mail.