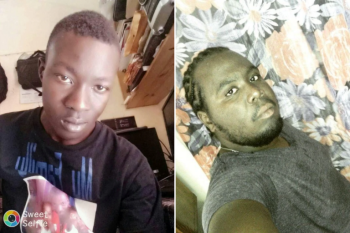 On Thursday January 6, journalists John Wesley Amady and Wilguens Louis-Saint were killed by gang members in Pétionville as they covered a story on the arms trade in Haiti. A few of Amady and Wilguens’ longtime collaborators and friends put together this campaign to support each journalist’s family.

We are aiming to raise $20,000 to support funeral expenses and ongoing needs the families will have. Any funds that are raised will be shared equally between the two families, with whom we are in direct communication.

Please give what you can to support their families during this difficult time and share this page with others in your network who may be able to make a contribution.

Amady worked as a cameraman, editor, and fixer for international media including Vice News and Al Jazeera and was a longtime collaborator with the newspaper Haiti Liberte. Amady is survived by his 57 year old mother, Claironne Salomon, and his older sister.

“I have so much to say about Amady. He had this desire to grow every day, this great work ethic, and just so much energy. He was always working on different projects and was always joking that he was going to replace me in the media industry. He was so young. It’s devastating to know he won’t have a chance to fulfill his dreams for himself as a journalist.” - Jeremie Dupin

Wilguens worked for online news outlets in Haiti including Télé Patriote and Tambou Varité and also worked as a cameraman and editor. Wilguens is the fourth child of his family. He leaves behind his mother, Wilguens Philina Jilis, a single mom, along with two sisters and two brothers.

“Wilguens was a quiet person with such a special dedication to his work. He was a true family guy, always talking about his mom and his family. He loved being a journalist so much. I talked with his sister this morning and she shared with me that Wilguens was the only member of the family to graduate high school. When he borrowed money from his mom to go to school, he didn’t tell them what he was going to study because he was worried they would have tried to stop him. They didn’t know about the career he had chosen to pursue until he came home with his press equipment.” - Jeremie Dupin

Strength and sympathy to the families of the victims. May their souls rest in peace.

Note: Funds will be transferred from GoFundMe to Jeremie Dupin (listed as the beneficiary of this campaign) on behalf of each family and then he will directly deliver them to the families of Wilguens Louis-Saint and John Wesley Amady in Haiti.